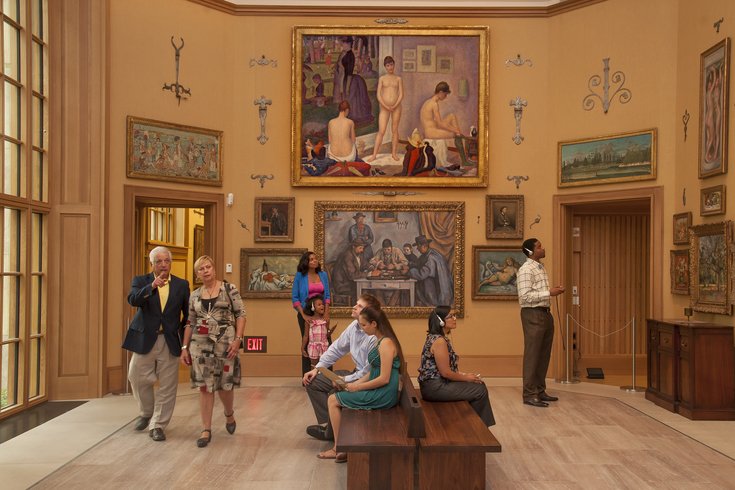 Inside the Barnes Foundation.

Even boycotters of the Barnes Foundation can now look through the art gallery’s expansive collection without stepping foot in the building.

Last week the gallery announced more than 2,000 of its works are newly available to search and view through its new digital collection, organized to reflect the unique, idiosyncratic way the Barnes collection is arranged in house.

Marking five years since the impressionist, post-impressionist, and early modern works were pulled from their original Merion location and repurposed on the Benjamin Franklin Parkway, a decision that garnered its fair share of critics for effectively disregarding founder Dr. Albert C. Barnes’ will in doing so, the gallery wanted to commemorate the anniversary (which has resulted in an outpouring of more than 1.5 million visitors) by launching the collection online.

The new project is the result of a $155,000 grant from the John S. and James L. Knight Foundation, and is the first online tool used by an art gallery that enables searches through a focus on visual properties (light, line, color, etc.), as well as the more traditional ways to search for art (artist, title, era, etc.).

“By grouping works together according to their formal elements, rather than historical connections, [Dr. Albert C. Barnes] emphasized the universal nature of human expression, making them more accessible no matter one’s level of familiarity with the arts,” said Shelley Bernstein, the Foundation’s deputy director for audience engagement, in a press release.

“This project is an opportunity to apply this pioneering approach in the context of contemporary digital practice. Our goal was to build a next-generation collection website that is designed for all online users without the barriers that inhibit deeper connection and discovery.”

More than 1,400 of the works published online are also copyright-free, meaning images can be freely and legally downloaded, which the Barnes Foundation envisions will be of particular use to educators and students. In the public domain is work by Pierre-August Renoir, Paul Cézanne, and Vincent van Gogh, among others.

The online gallery is in line with recent decisions of other art institutions such as the Metropolitan Museum and the Museum of Modern Art, among others, which have gradually shared more of its work online.

The Barnes Foundation, however, has held a long, strict policy about blocking color reproductions of its collection since it was founding in 1922 -- another facet of Barnes' original vision for his collection. Smithsonian notes this restriction was in line with Barnes' wish that the museum permit only 60,000 attendees a year.

It wasn’t until the last 25 years or so that the no-color reproduction policy began to lighten, with the current digital gallery a fulfillment of the Foundation's promise to Philadelphia's donating foundations to make the collection more accessible.