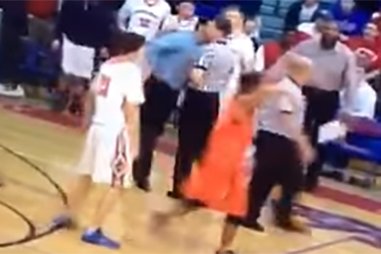 Jerry Devine, the Neshaminy High School basketball coach who made national headlines for getting physical with an official earlier this month, has returned to his teaching job as a special-education instructor. He won’t be coaching at the school anytime soon, though.

Devine was dismissed from his coaching position on Tuesday. From Philly.com:

Jerry Devine had been suspended from his position as the head coach of the boys' varsity basketball team at Neshaminy High School since the Jan. 5 incident.

He was officially removed from his coaching duties during a Tuesday night school board meeting.

For the incident, the ten-year coach at the school was reportedly charged with harassment.