Aide to Kathleen Kane gets jail sentence for email snooping 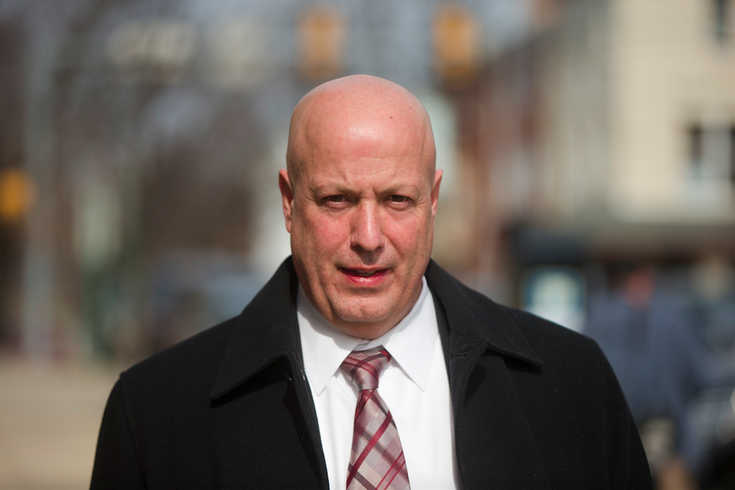 Patrick Reese, an aide to Pennsylvania Attorney General Kathleen Kane, departs after a sentencing hearing Thursday, March 3, 2016, at the Montgomery County courthouse in Norristown, Pa. Reese has been sentenced to three to six months in jail for illegally accessing emails to keep tabs on a grand jury probe of his boss.

An aide to Pennsylvania Attorney General Kathleen Kane was sentenced Thursday to three to six months in jail after a court ruled he illegally accessed emails in order to watch her boss's adversaries in a grand jury probe.

Patrick Reese, 48, will continue to serve as Kane's driver and security chief as he appeals the contempt of court verdict, according to ABC News. He will also remain on the state payroll earning a salary of nearly $100,000 a year.

The dispute arose over a protection order issued by Common Pleas Judge William R. Carpenter, who banned Kane's aides from accessing an office email server to guard the secrecy of the grand jury proceedings. Montgomery County Assistant DA Thomas McGoldrick acknowledged that Reese was likely ordered by Kane to keep tabs on the emails, but said that doesn't represent an excuse.

Kane said in a statement Thursday that she regarded Carpenter's protection order as unconstitutional and would not suspend Reese as he appeals the contempt of court ruling.

Reese is accused of snooping on a grand jury's witness schedule in Kane's grand jury probe and seeking information about several individuals involved in the proceedings, including Carpenter, special prosecutor Thomas Carluccio and his wife, Common Pleas Judge Carolyn Carluccio, among others.

McGoldrick argued that Reese deliberately acted in violation of the protection order with the intent of digging up dirt.

The searches occurred as Kane was under investigation for allegedly leaking secret grand jury information to the press in an attempt to embarrass Frank Fina, a former prosecutor in her office who went on to join the Philadelphia District Attorney's Office. After Carpenter referred the grand jury findings to Montgomery County officials in August, Kane was charged with felony perjury, obstruction and related charges.

Kane has pleaded not guilty and will go to trial in August. She has withdrawn her candidacy in the race for Pennsylvania Attorney General and will complete her current term in January.

Before joining Kane's office, Reese was a police chief in Dunmore, a northeastern Pennsylvania town where he served as a law enforcement officer for 25 years.