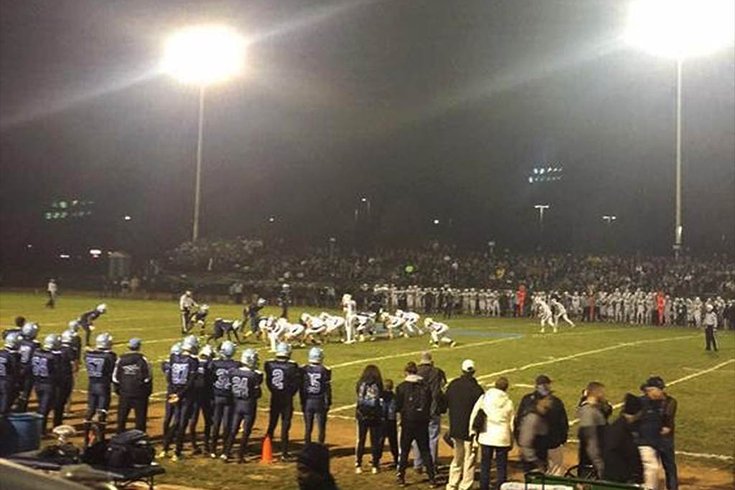 North Penn plays Garnet Valley in a PIAA Class AAAAAA Football Playoff game at the Lansdale school on Friday night. A week earlier, North Penn hosted Coatesville High for a playoff game. Members of Coatesville's cheerleading squad told school officials they were targeted with racial slurs while walking across the North Penn side of the field.

A pair of recent incidents in the Coatesville and North Penn school districts have both communities trying to move on from disappointment arising from the casual use of racially offensive language.

The first incident occurred Nov. 18 during a football game between Coatesville Area High School and host North Penn High School. During the 35-13 North Penn victory, Coatesville cheerleaders were allegedly targeted with racial slurs while walking across their opponent's side of the field at the Lansdale school.

At least two cheerleaders went to their coach that night to report that they had been taunted with words including "n*****" and "slaves," according to Coatesville Area School District spokeswoman Beth Trapani.

We take these allegations seriously ... given Coatesville’s long history of dealing with racism. Our students felt threatened and unwelcomed in an environment and event that should be inclusive and respectful." — Dr. Cathy Taschner, Coatesville superintendent

The following Tuesday, at a Nov. 22 school board meeting, CASD Superintendent Dr. Cathy Taschner announced the district had filed complaints over the football incident with the U.S. Department of Justice, the Pennsylvania Human Relations Commission, the NAACP, the Center for Safe Schools and the Pennsylvania Interscholastic Athletic Association.

What should have been a model for proactivity in Coatesville went south in the moments that followed. Longtime school board member Deborah Thompson uttered the 'n'-word herself while responding to a question about her district's policy of barring student athletes from participating without sufficient school credits.

Thompson, quoting a former Coatesville board member's remark in 1982, used the expression "there's always a n****** in the woodpile." She apparently meant to suggest that while there may be students for whom an exception seems right, placing athletics ahead of academics will ultimately destroy the educational mission of a school.

In a post Sunday night on her personal Facebook page, Thompson, an African-American, attempted to explain her use of the 'n'-word and expanded on the importance of giving black students the skills they need to be successful as adults.

"I will apologize to those who either misunderstood me or take offense that I said the word [as] opposed to saying 'N,'" Thompson wrote. "I was speaking about a lingering mindset then till now regarding minority athletes and especially black athletes related to their need to be successful in academics and appropriate conduct."

Put side by side, the two issues have resurfaced racial antagonism from the not-too-distant past, when former CASD superintendent Richard Como and former Director of Athletics Jim Donato were caught exchanging racially disparaging text messages about Coatesville students on district-issued cell phones. Both men would later be charged in the alleged theft of thousands of dollars of school district funds. (Donato was convicted in August and received jail time; Como's trial is set for the coming weeks.)

In response to the Coatesville cheerleaders' allegations, the North Penn School District issued the following statement:

NPSD is investigating complaints of inappropriate behavior at its November 18th football game with Coatesville Area Senior High School. The superintendents of both school districts have discussed the matter and are working with their staffs to determine next steps and whether the allegations have merit.

At North Penn High School and in all of North Penn’s schools it is important that our students be respectful of others whether in the classroom, after school or at a football game. Sportsmanship is an important lesson of life and school athletics. Allegations of unsportsmanlike conduct are taken seriously and will not be tolerated if determined to be true.

"North Penn has been completely cooperative in the investigation and I think we are completely aligned," Trapani said. "Neither schoool would tolerate or condone this kind of behavior and language."

The possibility of discipline will depend on how the investigation unfolds, Trapani said.

"It may not be a matter of discipline," she said. "It could be about focusing messaging at our schools that racism of any kind won't be tolerated."

On Tuesday, superindendent Taschner issued a statement to the Coatesville community reiterating the district's commitment to peaceful interaction within and between communities.

"We take these allegations seriously ... given Coatesville’s long history of dealing with racism," Taschner said. "Our students felt threatened and unwelcomed in an environment and event that should be inclusive and respectful."

The various organizations that have received formal complaints about the incident are "actively helping Coatesville restore a racially sensitive and appropriate environment," Taschner said.

It is the school district's position that Deborah Thompson should not be questioned after dedicating so much of her life to fighting racism.

"This is someone who's been a champion for civil rights for decades," Trapani said. "It was an unfortunate choice of words. There comes a point where it is important to consider context and the difference between quoting someone and using actions or words to describe people. It's not that this isn't concerning, but the district will continue its conversation with the community in a respectful, transparent and forthright manner. It's a reminder that words are important."