Jason Whitlock denies speculation that A.I.'s harsh words were for him 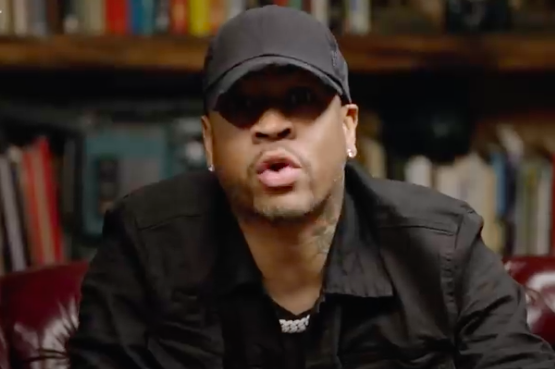 In an appearance on the "All The Smoke" podcast, Allen Iverson took aim at a journalist whose name he wouldn't mention, saying he hates him and the journalist hates him, too.

Allen Iverson generally has been pretty jovial in retirement, but something struck a nerve with the NBA Hall of Famer on Thursday.

Iverson appeared on Stephen Jackson and Matt Barnes' "All the Smoke" podcast, where he discussed a range of personal topics, including misconceptions about wealth and the obsessive pursuit of money.

Their conversation touched on basketball (Eric Snow should be a coach?), playing through injuries for Philly fans, the craziness of 2020, and his love for people of all races, with name-drops for white teammates such as Kyle Korver, Keith Van Horn and Todd McCullough.

But there is no love lost between Iverson and one particular journalist — believed to be someone currently dealing with a separate controversy — whose name the former Sixer would not utter.

Barnes brought up his distaste for media figures who attack professional athletes — often personally — without having any real background in high-level athletic competition and the things that come with it. That got Iverson worked up.

Allen Iverson has a message for a certain TV personality

"The way you hate me, motherf*cker I hate you too...you and your daddy." 😳

Just trust me. The way you hate me? Motherf***er, I hate you, too. The feeling is so mutual, and you don't help me, and I don't help you. And I'm fine. I'm fine out here, regardless of how much you talk about me. Just know who I'm talking about, and I'm not mentioning your name, because I don't even want the whole world to even know that them and I give you that type of love. Oh, you and your daddy. You and your daddy.

Those are strong words, obviously. Iverson clarified that he was not talking about FS1's Skip Bayless, who has lately been under fire for criticizing Dak Prescott. The Cowboys quarterback had openly talked about his struggles with depression following his brother's suicide. Bayless is apparently about to get a massive contract extension, anyway.

Locally, there's been some chatter about whether Iverson meant Howard and Spike Eskin at SportsRadio 94WIP. That seems a bit out of context, and neither of them are in any particularly large media storm at the moment. It would mean Iverson was specifically addressing Spike, and then tacking Howard on at the end, when it would really make more sense the other way around, if at all.

Who else has been mired in controversy lately? There's been lots of speculation that Iverson was referring to "Outkick the Coverage" personality Jason Whitlock, who's been embroiled this week in an ugly gender war against attractive women in sports media.

In a 2009 column for FOX Sports, Whitlock once called Iverson "the embodiment of everything that has gone wrong in America," writing him off as a "loser" who never cared about winning. Just before Iverson's Hall of Fame induction in 2016, while Whitlock was still with FS1, he also said on "Speak for Yourself" that Iverson's hip-hop persona damaged the NBA.

For those wondering who Allen Iverson was talking about in that "All The Smoke" interview going viral, this is a column Jason Whitlock wrote about AI in 2009 for FOX Sports... 👀 pic.twitter.com/CRME0tqoFM

Whitlock's late father was a bit of a local bigshot in Indianapolis, where he owned a lounge and was supposedly known as a "ladies man," according to his obituary. Short of Iverson saying anything more, it would be hard to know whether he had any interaction with Whitlock's father, who died in 2013.

I have no real connection to Allen Iverson. Dude probably doesn't even know I exist. He talks about someone's "daddy." Schaap and Le Batard have prominent fathers. I have no clue who Iverson is talking about. Don't care. But move past your Whitlock Derangement. https://t.co/VKjItA67E2

Still, it's hard to imagine Iverson's words were intended for anyone other than Whitlock. His vitriolic and dislikable brand of media commentary tends to drown out any sense he might make, usually because he lacks basic respect for anyone he disagrees with and he's willing to take dehumanizing, low blows in a slimy fashion.

For what it's worth, Dan Le Batard tweeted about the clip, denying any involvement. On Friday, he added what reads as a facetious comment, but who knows?

I ain’t never had any beef with Allen Iverson. Leave me out of this. However, I don’t speak for my father.

This goes back generations with me and him. Before I was even born, my father had beef with his father. Our mothers also hate each other. And our wives. And our bodyguards. https://t.co/C2j1zvNgkA

Iverson's momentary anger aside, the full podcast has a pretty positive and upbeat tone. Both Iverson and Jackson addressed their feelings about social issues in a way that represents their beliefs better than the soundbites that surfaced earlier this year during the DeSean Jackson-anti-Semitism-Louis Farrakhan controversy. It's a worthwhile listen.