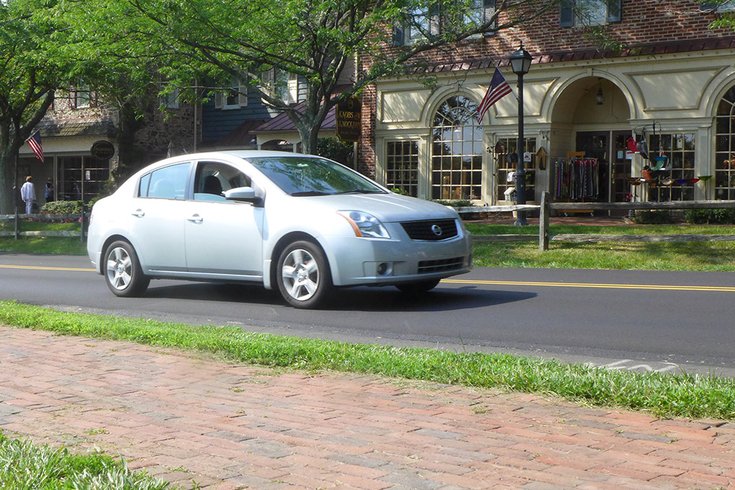 A car passes in front of 2541 Street Road in Peddlers Village on Thursday, July 20, 2017. An automatic license plate reader mounted on a Solebury Township police cruiser captured Cosmo DiNardo's 2016 Ford pickup truck – and a car driven by one of his alleged victims just behind him – in front of these stores at 7:49 p.m. on July 7. Two days later, he would tell investigators that he was not in Solebury Township that day.

Investigators in the missing-persons case that turned into a Bucks County quadruple murder were aided by a relatively new and little-known technology they did not have just several years ago.

And a bit of good fortune.

Early in the missing-persons investigation, around 2 a.m. on Sunday, July 9, Sturgis' Nissan was located near Peddlers Village, the popular outdoor shopping mall in Lahaska. Several hours later, Meo's 1996 Nissan Maxima was found at 2827 Aquetong Road, a nearby property owned by the parents of Cosmo DiNardo.

That same day, in the late afternoon, Bucks County detectives interviewed DiNardo for the first time. He told detectives he picked up Finocchiaro at his home around 7 p.m. on Friday, July 7. But DiNardo said he later forced him from his vehicle after Finocchiaro asked DiNardo to accompany him to a "big coke deal" in nearby Langhorne.

DiNardo, 20, who lived in Bensalem, told detectives that he then went fishing near Washington Crossing and Morrisville till dusk. He denied being in the Solebury Township area, where his parents own an 80-acre farm.

But investigators caught a break.

Two plates they were looking for came back. 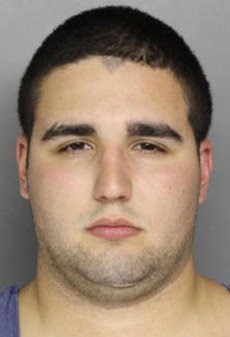 Cosmo DiNardo is charged, along with his cousin, with killing four young men on his family's farm on July 5 and July 7.

"In that particular case, the officer happened to be in the area, which was a little luck on our part," said Dominick Bellizzie, police chief in Solebury Township. "It wound up picking up both vehicles, both Cosmo DiNardo's vehicle and, a couple minutes after that, Mr. Meo's vehicle."

The ALRP device, typically used to detect expired or suspended vehicle registrations and pinpoint-accurate, had put both cars in a location less than a mile from the DiNardo family farm and from where Sturgis' vehicle had been found. Remarkably, in a municipality with more than 70 miles of roads, the department's ALRP-equipped police cruiser had crossed paths with DiNardo and Meo.

The next day, Monday, July 10, police executed a search warrant for the DiNardo farm on Lower York Road, leading to a week-long search for the four men's bodies.

Three days later, on Thursday, July 13, Dinardo confessed to killing all four men at the family farm, according to prosecutors. His cousin, Sean Kratz, 20, of Northeast Philadelphia, allegedly participated in three of the killings.

Authorities have kept many details of the investigation close to the vest as it continues to play out. But Bellizzie said the information gained from the license plate reader proved valuable.

"There was a lot of pieces that we can't get into, but that was a piece that was in the affidavit of probable cause," Bellizzie said. "That put the two of them together on the night in question, which was an important piece."

Four years ago, that piece might have been missing. Solebury police first began using ALPR technology in 2014, Bellizzie said. 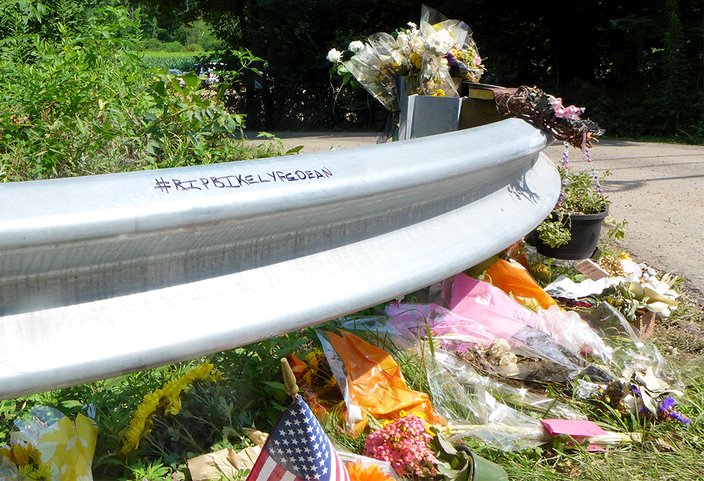 After the Solebury Township Police Department's ALPR system showed Cosmo DiNardo was in Peddlers Village, investigators executed a search warrant on his family's farm less than an mile down Lower York Road, above. On Thursday, the entrance to the 80-acre property was adorned with memorials to the four young men who were murdered and buried there two weeks ago.

Automated license plate readers, or ALPRs, use image processing technology to read and record the license plates of vehicles passing by. They can be mounted on police cars and roadside structures, like signs and bridges.

The ALPRs give police an additional tool in their search for stolen vehicles, missing persons and expired licenses and registrations. They also are used by parking authorities, parking facilities and some private companies.

Dozens of local police departments belong to the Southeastern Pennsylvania Regional Task Force, a network of police agencies that share data collected by their respective ALPRs through a regional server hosted by the Delaware Valley Intelligence Center in South Philadelphia.

The network includes police forces from Bucks, Chester, Delaware and Montgomery counties. The Solebury Township Police Department is among them.

"They're very useful if there's an Amber alert, if there's a vehicle missing associated with a particular child," said Mike Fergus, program manager for the International Association of Chiefs of Police. "It all depends on how the individual agency has it set up and what they're looking for."

The technology, which gained traction about 10 years ago, uses a pair of cameras to capture the license plate information of passing vehicles.

The device immediately interprets the license plate's characters and checks it against a database of vehicles listed as stolen, wanted or with expired registrations, among other possible settings. The ALPR system provides the officer an audible alert when there's a match.

Before stopping a vehicle, patrol officers must verify the information with an image of the license plate, also captured by the readers, which are not always able to distinguish between different state license plates.

"Sometimes, a 'K' can be mistaken for an 'X,'" Fergus said. "They verify that before they take any action. An ABC123 from Texas might look like an ABC123 from Indiana."

Data recorded by the license readers also can be stored and searched at a later time, helping police as they look for missing people or fugitives. That's what occurred in the DiNardo investigation.

"If you're looking for someone who is missing, you stick (their license plate number) in the database," said Joe Alkus, a Temple University professor with three decades of law enforcement experience. "You can find a missing person quickly. You can find a fugitive quickly. That's the advantage of it." 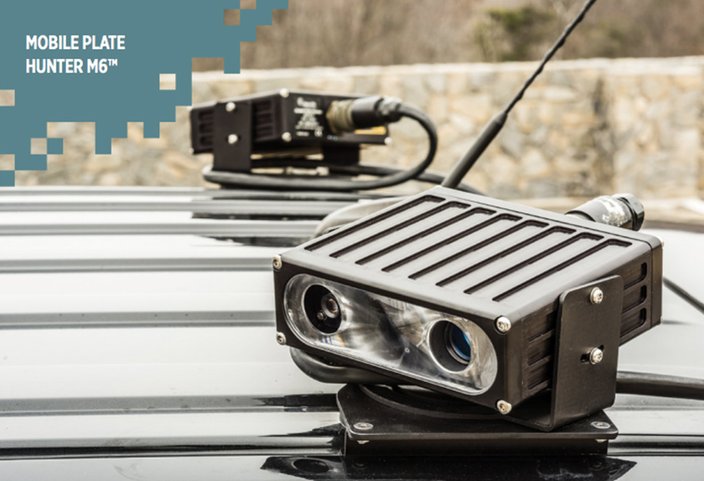 The Mobile Plate Hunter M6, manufactured ELSAG, is one example of an ALPR system used by law enforcement agencies.

In Pennsylvania, the use of ALPRs is expanding.

This year, the Pennsylvania Department of Transportation eliminated registration stickers, instead requiring police to use ALPRs to catch drivers operating vehicles with expired registrations. The General Assembly approved the transition to ALPR technology in 2013 as part of the Act 89 transportation bill.

But the ALPRs aren't cheap. Each unit costs between $18,000 and $20,000, though many municipalities use grant monies to purchase the technology. And they aren't without privacy concerns, either.

When in use, ALPRs can collect the license plate, date, time and location of thousands of cars every minute. That data can be pooled into regional sharing systems, as it is in Southeast Pennsylvania.

But unlike some states, which regulate the use of ALPRs, Pennsylvania does not. (New Jersey has a five-year data retention period.)

Instead, law enforcement agencies come up with their own policies determining how the technology is used, how long information is stored, and who receives access to that data.

For instance, Philadelphia police limit officers to using ALPRs strictly for "crime and official business," according to a directive issued in 2013 and updated 14 months later. Transit data is retained for one year at its ALPR operation center, unless used in a criminal investigation.

Fearful of an invasion of privacy, The American Civil Liberties Union has called for legislation limiting the use of ALPRs by law enforcement agencies. But it particularly wants laws restricting the length that data can be kept against innocent citizens and limiting those who can access that data.

Several years ago, the ACLU found that many police departments did not have policies on the use of ALPRs.

"The ACLU does not oppose the use of license plate readers," said Sarah Rose, senior staff attorney for the ACLU of Pennsylvania. "We just think it's important to put in place policies that balance people's privacy against the important function that they serve."

Even across the country, there are few standards.

Fourteen states have passed some type of regulations on ALPRs, according to Alkus. Most restrict the use of the license plate readers to public safety organizations, with some exceptions for parking authorities.

They also restrict the length of time that data can be stored. But it's a wide range, Fergus said.

"That's the biggest controversy of all," Fergus said. "Some states keep it for three years. Some states can only keep it for seven days or 21 days. It depends on the state and the jurisdiction."

The International Association of Chiefs of Police encourages all police departments to post their ALPR policy to their web site, ensuring the public knows how long the data is stored and who has access to it.

"Nobody can go in there and just start searching the data," Fergus said. "They want to make sure there's a legitimate reason for it. That's the biggest guarantee that the public has – a policy is in place that prevents abuse of the system."

The General Assembly considered legislation regulating ALPRs last year, but the bills failed to gain floor votes. A House bill would have consolidated storage of ALPR data at the Pennsylvania State Criminal Intelligence Center, where it would have been destroyed after one year unless it pertained to a criminal investigation.

The bills were not re-introduced to the current legislative session.