The headline seems to say it all.

But it doesn't capture what journalist Jillian Jorgensen, pictured below, experienced from the very first moment she felt the Amtrak train shake several miles out of 30th Street Station.

Her prose does, however. 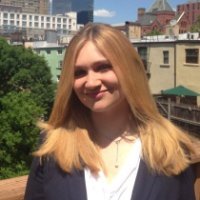 The seven-car train derailed Tuesday, May 12 at Frankford Junction in Port Richmond after it entered the curve at 106 mph, more than twice the speed limit for that stretch of tracks. Eight passengers died and more than 200 people were injured.

In a piece published Tuesday, the Observer.com senior politics editor takes us inside the quiet car of the train that fateful night as she traveled from Washington to Newark.

One moment she is sipping red wine in her seat, and then:

Philadelphia came and went. Minutes later, the train shook. It was enough to make me look up. It felt like exactly what it was—like we were hitting a curve too fast. I know now that curve was to the left, but all I could feel was the train lurching rightward. From my aisle seat, I could see it happen to the car ahead of us first—the business class car, just a couple dozen feet away from me, where most of the deaths were. I saw that car tip to the right, and any hope I had of the train slowing down evaporated. But at the same time my mind slowed down, just like they say it will in a moment like this, and I knew very clearly we were derailing. I felt a tremendous bump and the lights went out. My phone and the cup of wine flew out of my hands. I flew out of my seat as the train barreled across sets of tracks at more than 100 miles per hour.

It was almost like being knocked down by an ocean wave—the sensation of falling end over end, limbs flailing, blindly groping for help, the loud rush of churning water filling your ears. But there was no water or soft sand, instead there was just empty space and debris—other people, their belongings, chairs that became dislodged by the violent force of the crash.

A week later, Jorgenson says she tries to read everything about the crash. Looking at photos. Asking herself questions like: How could this happen to me? Why am I alive?