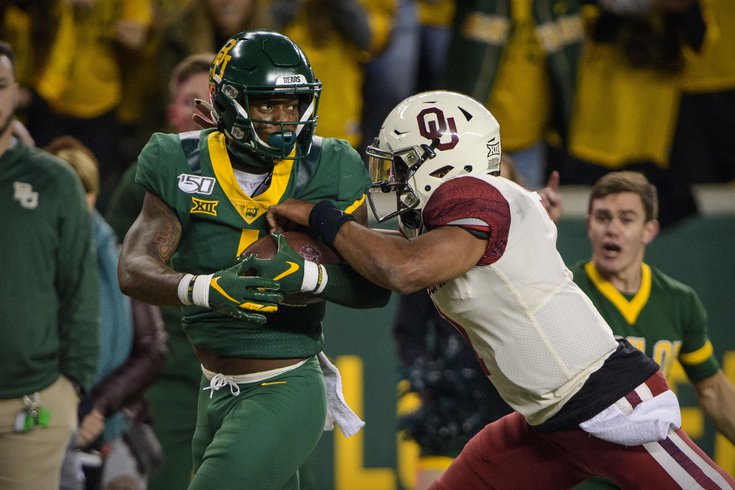 During the 2020 NFL Draft, the Philadelphia Eagles made 10 draft picks. After it was over, they signed 12 additional undrafted free agents.

The chart below shows a snapshot of those players, and their grades from Lance Zierlein of NFL.com, as well as their projected round from before the draft on NFLDraftScout.com:

This undrafted free agent group isn't quite as strong as some previous years. Perhaps that is due to the fact that the Eagles made 10 picks in this draft.

We'll (maybe) get a better look at these guys during training camp, but for now, let's just look at the top six players (in my opinion) in this class, individually:

Arnold had six INTs in 2019, most of which were in big games, and he offers some added value as a punt returner. He has a fun highlight reel.

Arnold fits the "positionless" profile the Eagles are looking for in their defensive backs, as he projects to slot corner or safety in the pros.

Warren is a between-the-tackles bowling ball, who could be a complementary power back to the more explosive Miles Sanders and the shifty Boston Scott. He runs with power, but he also does a nice job picking his way through traffic with quick, choppy stops. A look:

Over the last two seasons, Warren has rushed for over 2,500 yards, though on a low yards per carry average, mostly due to poor O-line play.

The Eagles have gotten good production from undrafted running backs in the Doug Pederson - Duce Staley era, and Warren will have a legit chance of making the team.

As a redshirt senior in 2019, Williams had 48 tackles (7.5 for loss), 5 sacks, and forced fumble. He does not offer plus athleticism. Some highlights:

Williams will battle it out with guys like Bruce Hector, Anthony Rush, and Albert Huggins for a back of the roster spot, or the practice squad.

Olson was the 2019 Buck Buchanan Award winner, which is given to the most outstanding defensive player in the FCS. He was a tackling machine at Montana the last two seasons.

Of concern would be the 4.88 40 he ran at the Combine, though his other explosive measurables are good.

It's going to be difficult for Olson to stick in the modern NFL with 4.88 speed, but he has the right temperament, and should bring out some competition.

Notable because he landed a nice UDFA payday.

Western Michigan center Luke Juriga to the Eagles, per a league soruce. Got $116,000 total guaranteed, including $100,000 base salary guaranteed, $16,000 signing bonus

Killins probably has little chance of cracking the roster, but he'll be fun to watch in camp.