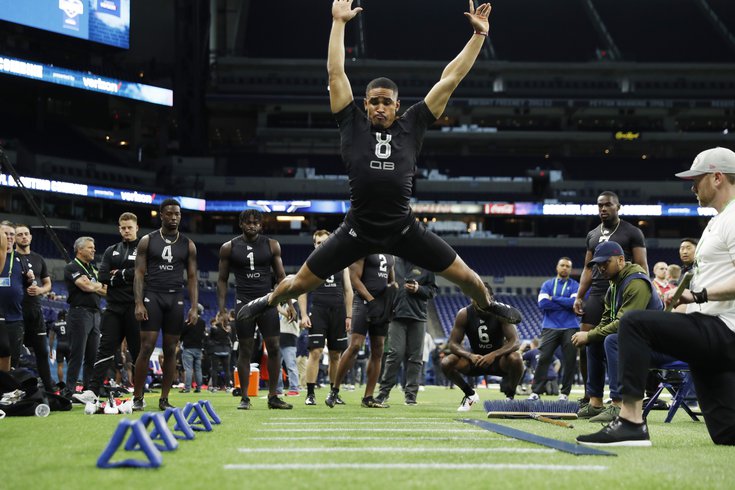 Jalen Hurts has leaped into our lives, like it or not.

We've slept on it and we are no closer to understanding why the Eagles used a second-round pick on a quarterback Friday night.

We did our best to play devil's advocate and think outside the box to try and understand Howie Roseman's rationale, and while some of you saw his reasoning, most Eagles fans are beside themselves.

Sportswriters are apparently too...

The morning after, the Eagles selection of Jalen Hurts still makes almost no sense to me at all. It makes less sense to me than when they drafted a 26 year old firefighter in the first round.

Waking up Saturday, our first impulse was to see what the heck people are saying about Jalen Hurts being drafted by the Eagles. So, without further ado, let's dive into the analysis, takes and rationales being spewed today about what happened with the 53rd pick in the 2020 NFL Draft:

Let's start with some takes, most of which are hard to disagree with. McLane joins the ranks of pretty much every Eagles writer who was trying to get Roseman to do a better job of explaining the draft choice last night than what he seemed to lean on — "quarterbacks are important." Roseman was asked what the best case scenario was with Hurts now on the roster. His answer was far from direct. Here's a look at what McLane thinks of the best case scenario:

The only ways the Eagles can likely maximize the controversial drafting of Jalen Hurts would be for Carson Wentz to either get injured or for their franchise quarterback to not be what the team paid him to be last year.

There is nothing wrong with selecting a quarterback like Hurts, whether you view him as a developmental project or a multipurpose weapon to play a handful of snaps every game. But to expend a second-round pick when you have just invested long-term in your 27-year-old quarterback reeks of hubris.  [Inquirer.com]

Nothing to see here

It's hard not to be focused on Roseman here. He's a guy who has had some great success at the helm of the Eagles, but drafting has been his biggest weak spot throughout the years, and his first two picks in 2020 have done nothing but add to the scrutiny. It's remarkable to think about, but somehow the Eagles managed to become national news last night. The first story on ESPN's SportsCenter following the conclusion of the third round was Hurts' selection. News outlets all over the football world are writing stories about the Eagles second-round pick.

Here's an excerpt from one such story that tries to explain the "spin" the Eagles front office is giving to the draft choice:

General manager Howie Roseman and coach Doug Pederson immediately tried to downplay any talk of a quarterback controversy, but better luck next time. Some Eagles fans never warmed to the injury-prone Wentz and the arrival of Hurts could reinforce the adage the most popular player on a team is the backup quarterback.

“We’ve shown how we feel about Carson by our actions — by the amount of picks we’ve put into [helping] him and by the contract extension,” Roseman said. “We believe this is the guy to lead us to our next Super Bowl championship, but for better or worse we are quarterback developers. We want to be a quarterback factory.”

Starter in the NFL

This is a little outside-the-box for what we usually do in this space, but we felt including an NFL insider's take is helpful in understanding the full absurdity of what the Eagles did. Brian Baldinger is a former Eagles player and one-time FOX NFL broadcaster. Here's a little bit of Baldinger's analysis on his podcast (on the RADIO.COM family, h/t 94WIP for transcribing):

“If I just throw out Russell Wilson as my comparison, I’m not being foolish. Russell Wilson is a top-five quarterback in the league and has been for almost eight years now. He’s an unparalleled competitor. [Hurts] is bigger and stronger than Russell Wilson and he’s as fast. He can’t throw it like Russell can right now, but Russell didn’t throw it like that when he first came to Seattle in 2012. He’s gotten better over the years. Hurts has the same ability to escape, to extend, to look down the field, to find open receivers… I think this guy is going to end up being a starting quarterback in the NFL.”

A lot of writers like to toss their prospect analysis from a previous article at the bottom of a story about a newly drafted player, and this is no doubt what Stites did with his latest entry on Hurts at SB Nation. But the analysis he offers gives a little context and perhaps adds some sensibility to the Eagles decision to draft the QB. He predicts the quarterback can be a star in the NFL, but he is destined to sit on the bench first no matter what team gives him an opportunity:

Similar questions about Dak Prescott caused the former Mississippi State quarterback to fall to the fourth round in 2016 NFL Draft. He was drafted to be a long-term developmental project for the Cowboys, but was thrown into the fire as a rookie and has exceeded expectations. That’s a reason for optimism about Hurts. Still, Prescott’s surrounding talent in college wasn’t even close to what Hurts was working with, which left Prescott more room to grow.

Hurts probably won’t be following in Prescott’s footsteps and taking a team to the playoffs in year one. It could be a while before he’s ready to be a starter in the NFL. However, his long list of accolades at Alabama and Oklahoma make it hard to rule it out entirely.

The likeliest landing spot for Hurts is with a team that already has a starter in place. The Steelers, Packers, Colts, and Buccaneers are just a few squads that have aging starters and could use a young quarterback waiting in the wings. Time to develop could be all that it takes for Hurts to speed up his process.  [SB Nation]

Heifetz offers some interesting background and an unusual perspective on Hurts, and how he is weirdly qualified to become an Eagle. He also wrongly suggests that the city of Philadelphia "overwhelmingly favored" Wentz over Foles which, let's face is, wasn't exactly true. Still, a look at the unique journey Hurts took through the college ranks helps to better inform how he might fit in at the NFL level.

Jalen Hurts was the no. 1 dual-threat QB prospect in America in 2016 when he enrolled at Alabama, where he became the first true freshman to start at quarterback for the Crimson Tide since 1984. At 18 years old, he won SEC Offensive Player of the Year and led the team to an undefeated regular season. But Alabama lost to Deshaun Watson and Clemson in the national title game. Hurts vowed to avenge that loss. The following season, he led Alabama to an 11-1 regular-season record and defeated Clemson in the College Football semifinal to reach the title game again, this time against Georgia. But at halftime, Hurts was benched for freshman superstar Tua Tagovailoa, who won the game with a legendary second-half performance, including the game-winning touchdown throw in overtime. In other words, Jalen Hurts got Carson Wentz’d one month before Carson Wentz did.

After being supplanted by Tagovailoa as the starter in 2018, most observers assumed Hurts would do what so many star quarterbacks who get blocked on the depth chart do: transfer. Surprisingly, Hurts remained in Tuscaloosa, bringing his 26-2 record to the bench as Tagovailoa’s backup. Hurts’s faith in the team was eventually rewarded. When Tagovailoa was injured in the SEC title game against Georgia, Hurts replaced him. On the same field, in the same city, against the same team when he got benched a year earlier, Hurts led a second-half comeback to win the SEC title. A year after Hurts got Wentz’d, he became Nick Foles. [The Ringer]

Over at NJ.com, they broke down some winners and some losers from Day 2 of the draft. Not unexpectedly, but perhaps humorously, both Carson Wentz and Jalen Hurts (and Roseman) made their lists:

The Oklahoma quarterback landed in a place few could have guessed, but a good one for any passer. Hurts gets to join an Eagles team with head coach Doug Pederson, quarterback-friendly system and the specter of backing up a starter that hasn’t finished any of the last three seasons. Hurts will see the field. It’s just a matter of when.

The Eagles starting quarterback can tweet through it with positive thoughts, but the optics of the Hurts pick are what they are. It’s quite clear that the franchise still has reservations about Wentz.

What in the world is the Eagles general manager doing? Roseman (smartly) refused to package pick No. 53 in a trade up for Lamb during round one. But using that pick on Hurts defies all logic, and don’t give me the “he’ll be Taysom Hill” thing. Taking that in Round 2 is nonsensical.  [NJ.com]