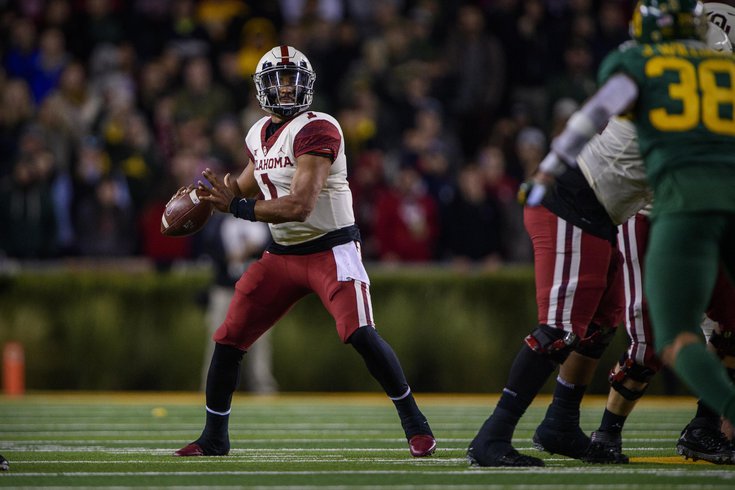 The Eagles took Oklahoma Sooners quarterback Jalen Hurts with the 53rd-overall pick in the NFL Draft.

Not a single soul in Philadelphia was prepared for the Eagles to use a second-round pick on a quarterback, but it was Jalen Hurts whose name was called for pick No. 53, and unless more news comes down the pipeline, the Alabama and Oklahoma product will be an Eagle.

If you have watched any college football over the last half decade, odds are you have probably come across a game Hurts was playing in. Hurts was the starter on loaded Alabama teams before being replaced by Tua Tagovailoa late in Bama's 2017 championship-winning season, and he had a big season throwing to CeeDee Lamb as a grad transfer at Oklahoma last season, throwing 32 touchdowns against just eight interceptions.

So who is Jalen Hurts? If you don't know by now, here's the rundown.

The No. 1 dual-threat QB in the country coming out of high school, Hurts was not asked to do heavy lifting as a passer early in his Alabama career. Alongside talented runners in the Bama backfield, Hurts was a legitimate weapon with the ball in his hands, a guy who could break arm tackles and pick up yards either around the edge or between the tackles in the best conference in college football. Those legs were a huge factor at Oklahoma, too, with Hurts leading the Sooners in rushing and picking up 20 touchdowns on the ground in 2019, the latter a top-10 mark in the country.

Given that he's joining a team with an entrenched quarterback — at least that's what we believe at the moment — his ability to use his legs makes him an optimal change-of-pace to Carson Wentz, a la Tayson Hill in New Orleans. The main difference being that Hill went undrafted. With Wentz's injury history, the option to bring in another guy to sprinkle in true run-pass options (among other play designs) has to be part of the sales pitch for Hurts in Philadelphia.

Similar to Wentz, Hurts has some brilliant flashes as a passer on the move, thanks to a combination of arm strength and anticipation when he's not standing in the pocket. That arm strength allows him to throw the ball into tight windows, including the intermediate areas the Eagles tend to like attacking.

While Hurts doesn't deserve too much credit for winning a lot of games under center for two powerhouse programs, he is tough and poised in various game situations, which contributed to the runs of success for the Crimson Tide and Sooners during the four seasons he played in college. He will throw in the face of pressure and take chances on big plays to his own detriment at times, and that's preferable to a quarterback who has to be coaxed into trusting his arm to make big plays. Playing for two different huge programs, Hurts' leadership and ability to rally his teammates has been on display in both environments.

Over time, and in a different setup in Oklahoma, Hurts' passing numbers improved considerably, completing nearly 70 percent of his throws on 340 attempts last season, posting career-bests in yards per attempt and touchdowns. The tape shows a mix of everything — long touchdowns over the top, windows opened with his legs, and between-the-tackles runs that prove his ability to find the small creases that can transform a short gainer into a long touchdown run.

Put it this way — the Eagles shouldn't be expecting Hurts to step in and just throw darts from the pocket at the NFL level. Hurts' situational value would have to be exceptional to equal what the Eagles could have gained from finding an impact starter at a position of need. New Orleans' use of Tayson Hill is in many cases to their detriment, telegraphing that the Saints are putting a worse thrower on the field, the offense more likely to keep it on the ground or run a gadget play.

Developing Hurts as a quarterback will require the Eagles to clean up a lot of issues with his pocket presence. His legs are a gift and a curse, as his scrambling instincts goad him into breaking pockets unnecessarily instead of trying to step into a throw that's there to be made. That can put his offensive linemen, and certainly Hurts, in trouble when he's asked to drop back and throw from the pocket.

While NFL teams run more air raid concepts than ever, there are questions that remain about Hurts' ability to make a full series of progressions at the next level. The Eagles are a shotgun heavy team, which should be to his benefit, but that doesn't push concerns about his reads into the background completely.

On a play-to-play basis, his mechanics can vary from great to poor, something that stands out and hurts him more than others because of his lack of prototypical size (Hurts is about six-foot-one). The same toughness/poise traits that give him a cool head in adverse circumstances can be to his detriment at times, with Hurts making throws that aren't necessarily there. Those throws will be punished harder in the NFL, and accuracy will likely not be his calling card.

Hurts can't control who he was drafted by, but the upshot of the pick is that the best version of Hurts can only really exist in a universe where Philadelphia's Plan A goes completely off of the rails. This pick suggests a lack of confidence in Wentz, whether for health or ability issues, that is pretty terrifying after the contract they handed him prior to last season. If it's a move focused on developing a QB to trade him for better value later, it's a risky proposition with a draft board that left them in position to pick up an impact player who could help them immediately on either side of the ball.

Here's what Lance Zierlein of NFL.com had to say about Hurts pre-draft:

Like Tim Tebow, Hurts is a winning dual-threat quarterback known for his strength, toughness and character. Hurts is a more accurate passer and better runner than Tebow but is inconsistent as a decision-maker and tends to break the pocket when throws are there to be made. His deep-ball touch and intermediate accuracy improved this year so teams may see him as a developmental talent who will keep getting better in the right scheme. He'll struggle to beat NFL defenses from the pocket, but his ability to grind out yards on the ground and make off-schedule plays should make him a solid backup with upward mobility. [NFL.com]

Anytime the first name that comes up for your college comp is Tim Tebow, it seems like a bad sign for your chance to be a high-level QB at the NFL.

Here's what Matt Miller of Bleacher Report had to say about Hurts pre-draft:

Hurts won’t be a fit for everyone, but as the NFL moves from 6’5” pocket passers to more athletic, creative quarterbacks, he is an intriguing option. Hurts isn’t a conventional Day 1 starter at the position, but he has the tools to be effective early on if he can handle learning on the job. His work at Alabama and Oklahoma plus conversations with coaches and scouts suggest he's capable of evolving on the go like a Lamar Jackson or Josh Allen. Hurts’ accuracy has to improve, but the right coaches will create a passing attack to highlight his strengths. [Bleacher Report]

The player doesn't appear to be the problem here. Hurts was a well-liked, productive player at the highest levels of college football, a guy who can hurt teams in multiple ways and a good developmental option for an organization in search of a quarterback to groom.

But no one thought the Eagles were the team for that sort of player, at least not in the second round. Wentz is just 27 years old, theoretically with a lot of time left to prove himself as a high-level QB, and the late-season run he went on to lead a banged-up Eagles squad to the playoffs squashed some concerns about his ability under pressure.

The explanation for this pick, as well as their utilization of Hurts, will be fascinating to watch play out over the ensuing months, assuming we get to see Hurts suit up on Sundays this fall. Until then, there will be a lot of Philadelphians scratching their heads and wondering what the hell happened on Friday night.