2020 NFL Draft Grades: Was Jalen Reagor the right pick for the Eagles? 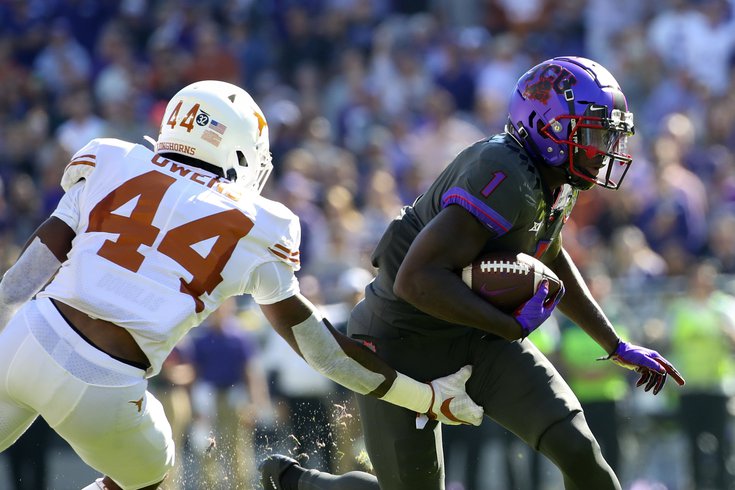 On Thursday night, the Eagles selected TCU wide receiver Jalen Reagor with the 21st-overall pick in the 2020 NFL Draft. And, somewhat unsurprisingly in a city like Philadelphia, the reaction was mixed to say the least.

But that split reaction isn't just limited to Eagles fans — it also seems as though the media at large are uncertain of whether or not this was the right pick for Howie Roseman to make, especially when some more highly regarded receivers were available a few picks before the Eagles, if only he was able to move up a couple of spots.

When it comes to grading the pick, however, there weren't a ton of hot takes. Instead of opinions being on either end of the spectrum, it seems like most people hedged their bets and graded the pick somewhere safe, in the B/C range. And which side of the fence you land on likely has to do with how high you were on the receivers the Eagles missed out on, not the one they wound up with.

Why? Because Reagor isn't from a big school like Alabama, Oklahoma or LSU. He didn't have a great time in his 40 at the combine. He has a penchant for drops. And his stats were harmed by a freshman quarterback last season. How exactly he fits in Doug Pederson's offense remains to be seen, but Reagor is a versatile threat that can be utilized in several ways. And for a team that was in desperate need of speed, the tape shows he has that in spades even if his combine time wasn't as good as expected.

The end result, at least when it comes to grades for the Eagles' first-round pick, was a pretty solid, if unspectacular, report card. There were no As (although there was an A-minus), but there was also nothing lower than a C-minus. It might not be one Howie wants to hang on the fridge, but if Reagor turns out to be a stud, he might want to hang on to the receipts.

The Eagles’ receiver corps badly needed an infusion of speed, and Philly got that with Reagor. The former Horned Frogs star is a twitched-up, highly athletic pass catcher with top-end deep speed and elusiveness in the open field. He is a compact muscle car of a pass catcher at 5-foot-11 and 206 pounds, but showed a knack for going up high and extending to make tough catches in traffic. He’s an electric return man, too, and averaged 20.8 yards per return on punts in 2019. Reagor’s production dropped in 2019 in TCU’s out-of-sync offense, and drops were an issue at times during his career―and while I had a couple of receivers ranked higher on my board, the team and scheme fit in Philly just makes too much sense.  [Danny Kelly, The Ringer]

I love Reagor. He didn't run a very good 40 at the combine. The night after that run his agent told me he put on some water weight. A couple days before they had him timed much faster. He's got good speed.  [Pete Prisco, CBS Sports]

In critical pass situations last season, the Eagles often went to 12 personnel—two receivers and two tight ends. Yes, they have a pair of quality tight ends in Zach Ertz and Dallas Goedert, but this personnel decision said more about what they had—or didn’t have—at wide receiver.

Reagor fills a gargantuan void. He was an explosive outside weapon at TCU who showed he can also move into the slot. While maybe not quite a pure burner through and through, he can still get vertical—a notable trait given that Carson Wentz is innately aggressive when it comes to pushing the ball downfield. Reagor also impressed scouts with some of his route running nuance—another notable trait given that Doug Pederson’s offense, when it’s functioning comfortably, is built on detailed route combinations.  [Andy Benoit, Sports Illustrated]

Reagor has a chance to be a good NFL receiver. He's competitive and explosive. The Eagles needed help at the position, so that box is checked. But his career will be compared to another receiver that some considered the lock selection in this spot: Justin Jefferson, who went one pick later to the Vikings. Will Jefferson's size and speed make him a Davante Adams-type playmaker, making the Eagles regret this pick? Can Reagor outrun guys after the catch as he did in college? How good are his hands, really? We shall see.  [Chad Reuter, NFL.com]

*Over at The Athletic, they actually had three writers — Sheil Kapadia, Bo Wulf and Zach Berman — grade the Eagles' pick, with the grades in the B-C range. Here's a quick look at what each had to say.

Sheil Kapadia (B): The main thing I thought the Eagles needed to focus on was finding a wide receiver who could separate. That’s the most important quality for guys playing with Carson Wentz — over other factors like yards after the catch, contested grabs and whatever else you want to put on the list. I saw Reagor consistently separate on film. His speed and athleticism really show up on the field, and he can win in a number of ways. He can dust corners on vertical routes and separate in the intermediate game and he showed great elusiveness. I thought he was one of the best “make you miss” guys in this draft class.

Bo Wulf (C): The grade is reflective of the process that led to Thursday night, during which the Eagles telegraphed a desperate need with a deficit of assets and left themselves without the wiggle room to take advantage of what could have been a serendipitous opportunity. I like Reagor. He’s immediately their most exciting wide receiver and has the juice and play personality they need. But he’s no CeeDee Lamb.

Zach Berman (B-): The Eagles needed help at wide receiver and needed to get faster, and they were able to address both with Reagor. That’s a good place to start because they added a high-upside player who will make their offense better. Reagor can stretch the field, he’s explosive with the ball in his hands and he gives the Eagles a big-play threat. The offense needed that, whether it’s to complement DeSean Jackson or eventually replace him. Reagor will also be valuable in the return game. (He averaged 17 yards per punt return in college.) He’s believed to have the competitive traits that the Eagles should want. If you were told on Thursday morning that they would draft Reagor in the first round, it would have been a fine result. But what if you were told Jeudy and Lamb would last into the teens, and that Jefferson would still be on the board at No. 21?  [The Athletic]

There is a lot to like about Reagor as a prospect. He has dynamic quickness and the ability to play multiple wide receiver spots on offense. He is also an asset as a returner on special teams. However, the Eagles’ overall patience throughout the offseason, and in Thursday’s first round, paid off with a pick that seems underwhelming from a first-round standpoint. While the Eagles wanted to take “their guy” at No. 21, Reagor’s value is murky, especially with where he was selected.  [Mike Kaye, NJ.com]

The pick simply comes off as the Eagles missing out on an opportunity to trade up and land a superior prospect, or passing on more of a known quantity. It's even fair to ask how much better Reagor is than the receivers who might've been around in Round 2.

The trouble with grading draft picks is we won't know for at least a year how good they are, often longer. But what we know today is Reagor was not graded on the level of the receivers who went only a few picks earlier, and going purely on gut reaction, there isn't near the same excitement or level of confidence in his ability.  [Andrew Kulp, NBC Sports]

Reagor was not the top wide receiver on the board since Jefferson was still available, but he could fit what the Eagles need. His speed on the outside may be a perfect complement for tight ends Zach Ertz and Dallas Goedert, who will take up space across the middle.

But it is worth considering if the Eagles could have traded down a few spots and taken Reagor since he was the No. 10 wideout on Miller's big board.  [Joe Tansey, Bleacher Report]

Held back by his college offense, Reagor projects as a dynamic, shifty playmaker if he can hone his craft more. The Eagles did a lot of work on Reagor, who could be a star at a glaring position of need in Philly with his speed, toughness and versatility  [Eric Edholm, Yahoo! Sports]