What they're saying: Did the Eagles reach for Jalen Reagor? 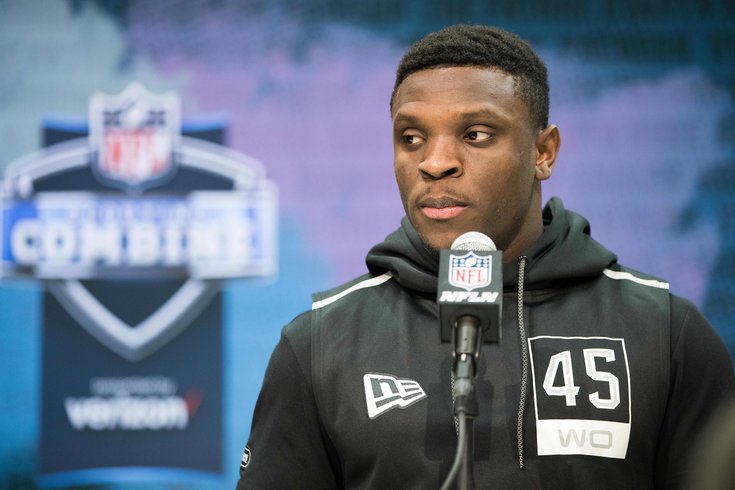 Should Eagles fans be happy with their newest drafted player?

The Eagles really wanted speed. Reagor provides that. I just couldn't pass up my 14th rated player (Justin Jefferson) for my 56th player (Reagor). It'll be fascinating to follow both of their careers.

There's nothing wrong with Reagor. He has speed. He has talent. His senior season was blown up by a freshman quarterback at TCU who couldn't really complete passes.

The question is, why did the Eagles stand pat and take him at 21 overall with arguably higher ranked (or at least more highly regarded) receivers still on the board? And why did they not make a more aggressive move to get a top three wideout after the trio slipped into the mid teens?

"To be honest, I feel like I'm just the most versatile. I can do everything," the 21-year-old said. "You know, I feel like I haven't even gotten close to my ceiling. You know, I can play any position. Like I said, when I'm on the field it's more than 11 players on the offense. Really just the way I play my game. I feel like it's on film and it's going to be fun and I'm ready to play."

Reagor is amped and ready to go. But is the Eagles-covering world as high on the draft pick as Howie Roseman and Doug Pederson obviously were? That's the question we will look to answer in our latest edition of what they're saying:

Tale of the Tape

In their deep dive look at what Reagor brings to the table to the Eagles offense, The Athletic makes a not so awe-inducing comparison to 49ers Deebo Samuel. Most assuredly, the Eagles are hoping he is a little better than that (with no offense to Samuel, who is not yet a finished product in San Francisco). However, there is a lot to like about the speedy wideout, as Max Olsen explains.

Reagor’s 42-inch vertical and 138-inch broad jump at the combine were elite efforts. He planned to run one of the fastest 40 times in Indianapolis, too, after running a laser-timed 4.34-second 40 during training. His official combine time, 4.47 seconds, didn’t come close to his expectations, so he taped a pro day earlier this month and ran a 40 that was hand-timed at either 4.28 or 4.22. Sure, some draftniks rolled their eyes at that claim. But when you turn on the tape and watch Reagor unleash his top-end speed, you understand it’s plausible..

Another thing the tape makes clear: Reagor plays a lot bigger than 5-foot-11. He can high-point a ball like the big guys. In his freshman year, he leaped up from a crowd and grabbed a Hail Mary pass against SMU. He can play physical and push defenders out of his way. He’s flashed a big catch radius. He can go up or lay out and make the spectacular catch. He can play outside or in the slot. And he’s a real weapon as a return specialist, capable of making the first guy miss and maneuvering in the open field. Reagor’s 15 punt returns in 2019 resulted in 312 yards and two touchdowns. All in all, he just might have been the most versatile wide receiver in the draft. [The Athletic]

Checking all the boxes

ESP over at WIP also gave some perspective on the Reagor pick, acknowledging that the selection at the 21 spot was a bit unexpected, but Roseman and the Eagles' decision-makers clearly had their reasons. The biggest reason to love this pick — if you were to let the team off the hook and let yourself love it — is that is helps with arguably the Eagles' biggest need: speed at receiver. Here's more:

When the season ended, everyone was in agreement — the Eagles needed a fast receiver that can be a home-run hitter and take the top off of defenses. Ideally that player would be young and could develop with Carson Wentz.

Reagor, on the surface, checks those boxes.

Outside of Henry Ruggs and perhaps KJ Hamler, Reagor was viewed as the most explosive receiver in this draft among the receivers projected to go in the first two rounds. His 40-time of 4.47 seconds is somewhat concerning, but Roseman said the Eagles had tracking data from his college games that show he has elite-level speed when the pads are on.

“You can see how they're running in games and their speed in games,” Roseman said. “He’s running at a really high level. He's been really fast in those games.

Although we don’t get to see that data, and you have to take his word on it, Roseman wouldn’t have selected Reagor at No. 21 if the data they had didn’t actually say that. [WIP]

One more assessment of the Reagor selection, and it has the same feel as the others, with ESPN's Eagles writer Tim McManus a bit curious about the actual decision to take the wideout at No. 21, but applauding his speed nonetheless. For McManus, it is his fit on the field that makes Reagor an understandable addition to the Philly offense.

The Eagles made a rather bold move by selecting Reagor at No. 21 with Justin Jefferson still on the board. Reagor is a burner, and that's exactly what Philly was on the hunt for after slogging its way through much of the 2019 season on offense. Jefferson is projected to play most of his NFL snaps in the slot and does not have the same type of game speed as Reagor, so you can understand why a two-tight-end focused team like the Eagles would go in a different direction. But Jefferson, the NCAA leader in receptions last year, is the more proven, polished prospect, making this a bit of a gamble. [ESPN]

You know what would be awful? For Eagles fans to see the best wide receiver in the draft fall just out of the team's grasp, only for their literal hated rival to take him just before they have a chance to make their pick. Wait... that happened last night? Here's more on the Cowboys improbable counterpunch to the Eagles brass for taking Dallas Goedert away from them a few years ago:

On social media, Eagles fans began to melt down over the possibility that hated divisional rival Dallas, picking 17th, would take Lamb. And sure enough, that happened, even though most of the predraft buzz had the Cowboys going for defense in the first round.

This seemed a cruel twist, given the Eagles’ obvious need, and the fact that they play the Cowboys twice a year. Not many people really thought Lamb was a possibility for the Birds going into the draft — mock drafts tended to place him in the early teens — but seeing him last so long, only to become a Cowboy, took a bit of luster off Reagor, even to many people who would have been happy to get him without trading up when the evening began. [Inquirer.com]

As we mentioned, the Eagles theoretically could have made a jump ahead of the Cowboys, like they did when they took Goedert, to pick Lamb. So why didn't they? Well, as hard as it it to admit, the Eagles are old. And with eight draft picks (as of right now) in the 2020 draft, Roseman and company are very focused on getting younger and making as many picks as they can, having already lost a pair of draft choices in the trade for Darius Slay. Clearly, whatever the price would have been to move up and take Lamb, it was too high.

“It was important for us, certainly, that we kept our high picks,” Roseman said. “We haven’t had a lot of those. And guys really weren’t in the range where it was even in consideration that we could get somewhere with a really high pick.” ...

But Lamb was ranked by many experts as the No. 1 receiver in the class. Not many expected him to be available as long as he was.

So did the Eagles come close to pulling of a trade to get up to 16 to draft Lamb before Dallas? ...

"We’re very aggressive in working the phones and having conversations with teams and trying to figure out where we can move and when we can move,” Roseman said. “It’s gotta work for both sides, obviously. But we were also very comfortable sitting here and taking a player that has a great skillset for what we’re looking for." [NBCSP]

In researching for this article, we skimmed through a lot of "winners and losers" posts, and most of them glossed over the Eagles' first-round decision. There is good and there is bad, but most experts still think the Birds get passing grades for Reagor's acquisition Thursday night. But at Yahoo, the draft choice was slotted under their losers category. In the interest in giving color from both sides of the coin, here's a look at what they said about the pick:

The Eagles passed on D.K. Metcalf for J. J. Arcega-Whiteside last year. They’d take that one back right now. They also have missed on others like Nelson Agholor.

The Eagles might be right about their receiver pick on Thursday, but it will be scrutinized closely.

The Eagles passed on LSU’s Justin Jefferson for TCU’s Jalen Reagor at No. 21 overall. Reagor is a talented receiver, but Jefferson was very productive at LSU and generally considered the fourth-best receiver in the class behind Henry Ruggs III, Jerry Jeudy and CeeDee Lamb.

The Eagles need Reagor to work out. They are suddenly pretty short at receiver, and Carson Wentz needs more than Zach Ertz to throw to. If Jefferson, who went to the Minnesota Vikings at No. 22, ends up being a star, it could be another regrettable choice. [YahooSports]