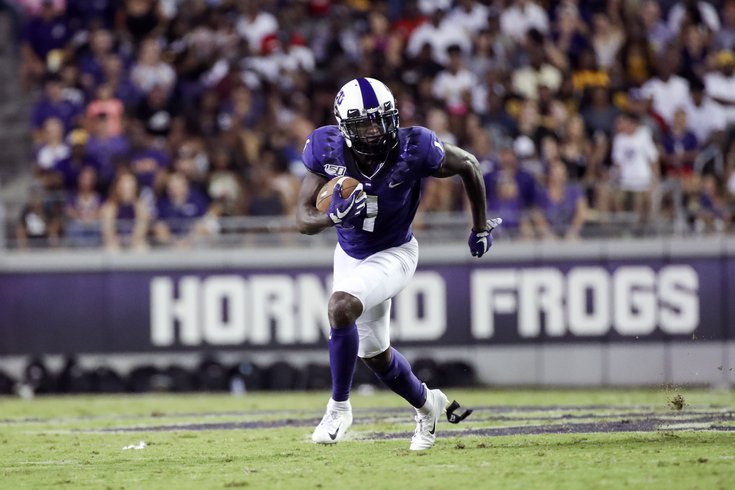 The Philadelphia Eagles have their shiny new receiver. With the 21st pick of the 2020 NFL Draft, they selected TCU's Jalen Reagor, who should add a speed element that the Birds' offense badly needs.

In addition to his speed, Reagor also has power, as The Athletic's Bruce Feldman pointed out in his yearly freaks list:

Reagor's Combine performance didn't quite match the hype, as he ran a disappointing 4.47 40, which is still a fast time, but fell short of projections that he would run in the 4.3 range.

As you can see in the chart above, Reagor's jump numbers show that he is a highly explosive player. His highlight reel is certainly fun:

In 2019, the the Eagles were forced to slowly inch their way down the field, often being forced to score on long, plodding, 10-plus play drives. Reagor will add a home run element, and should loosen up opposing secondaries, opening up the short to intermediate zones for guys like Zach Ertz, Dallas Goedert, and Miles Sanders.

Should DeSean Jackson stay healthy, the Eagles will have two receivers capable of taking the top off the defense. Reagor should also immediately contribute on special teams as a kick returner and punt returner.

There are two concerning downsides with Reagor. To begin, his production wasn't on the same level as many of the other receivers in this class, though many have attributed that to TCU's poor quarterback play.

The other significant negative is that he is prone to dropping the football, a common theme for many an Eagles receiver. Some statistical sites have Reagor with a very concerning drop rate as high as 16.4 percent. That must improve drastically in the pros.

MORE: Highlights, scouting reports and more for Eagles first-round pick Jalen Reagor | Twitter reacts to the first round of the virtual NFL Draft