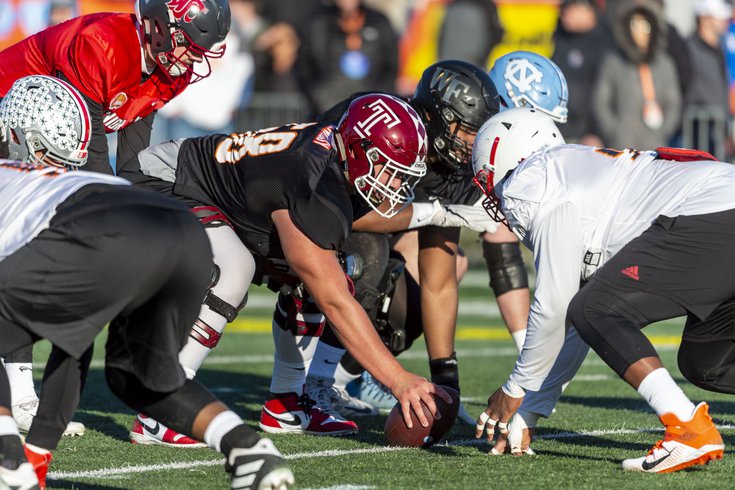 Why do this? Well, you already clicked, so got 'eem. Boom, I win. Here's my pointless, certain to be very inaccurate 2020 second-round NFL mock draft. The Eagles presently hold the 21st pick in the second round.

33) Bengals: Josh Jones, OT, Houston. The Bengals have their quarterback. Now they need to protect him.

34) Colts: Antoine Winfield Jr., S, Minnesota. The Colts reportedly have Malik Hooker on the trade block, so there's obviously something they don't like about him. Winfield could become his ball-hawking replacement.

35) Lions: Marlon Davidson, DT, Auburn. The Lions have needs all over their defensive line, and Davidson is versatile guy who can play DE and DT.

37) Patri*ts: A.J. Epenesa, DE, Iowa. I had Epenesa mocked to the Pats in Round 1. They simply get some free draft capital along with Epenesa in Round 2 instead.

40) Texans: Ross Blacklock, DL, TCU. Some thought Blacklock would go Round 1. Here he makes sense as a 3-4 DE.

43) Bears: Kristian Fulton, CB, LSU. In their secondary, the Bears have good players in Kyle Fuller and Eddie Jackson, and then it gets ugly.

44) Colts: Tee Higgins, WR, Clemson. Higgins is a bigger receiver that the Colts can add to a smaller group that includes T.Y. Hilton and Parris Campbell.

45) Buccaneers: J.K. Dobbins, RB, Ohio State. The Bucs add an inside runner to balance out what will likely be a pass-happy offense.

46) Broncos: Ezra Cleveland, OT, Boise State. Garett Bolles has not panned out as a former first round pick.

47) Falcons: Jeremy Chinn, S/LB, Southern Illinois. Atlanta had great success taking Deion Jones in the second round of the 2016 draft. Chinn has similar skills and can help lock down the short to intermediate areas of the field alongside him.

48) Jets: Denzel Mims, WR, Baylor. After addressing OL with his first round pick, Joe Douglas can turn his attention to the best available WR in Round 2.

50) Bears: Grant Delpit, S, LSU. The Bears were once unbothered by Ha Ha Clinton-Dix and his poor tackling, so presumably they'll be less bothered by Delpit's tackling issues more than other teams might.

51) Cowboys: Lloyd Cushenberry, C, LSU. Cushenberry fills right in as a replacement for the retired Travis Frederick. I like Temple's Matt Hennessy more as a player, but Cushenberry more closely resembles Frederick. Also, as they say, he'll provide more Cushenberry for the pushenberry (h/t Bo Wulf).

52) Rams: Jonathan Taylor, RB, Wisconsin. The Rams have needs all over, but they essentially have nothing at running back after releasing Todd Gurley.

53) Eagles: Matt Hennessy, C, Temple. I was really tempted to add K.J. Hamler here and just have all the speed, but the Eagles find their Jason Kelce replacement in 2021.

54) Bills: Trevon Diggs, CB, Alabama. The cooked Josh Norman is currently projected as a starter, and Diggs joining his brother in Buffalo would be fun.

55) Ravens: Laviska Shenault, WR, Colorado. Shenault's YAC ability is the perfect complement to the field stretching abilities of Hollywood Brown, and the Ravens can find some creative uses for Shenault in their run game as well.

59) Seahawks: Neville Gallimore, DT, Oklahoma. Such a difficult team to predict. They can still use some interior DL help, and Gallimore is an athletic freak.

60) Ravens: Jordan Elliott, DT, Missouri. The Ravens made some veteran interior DL additions this offseason, and they also need to fill the pipeline there with some youth.

62) Packers: Cole Kmet, TE, Notre Dame. The Packers add a skill position player for Aaron Rodgers, so we can all stop feeling bad for him for a second after Green Bay took a quarterback in Round 1.

64) Seahawks: Lynn Bowden, WR, Kentucky. The Seahawks love competitors, and Bowden is one of the biggest ones in this draft.