Why in the world did the Eagles draft QB Jalen Hurts?

Making sense of why on earth the Eagles used their second round pick on a quarterback... 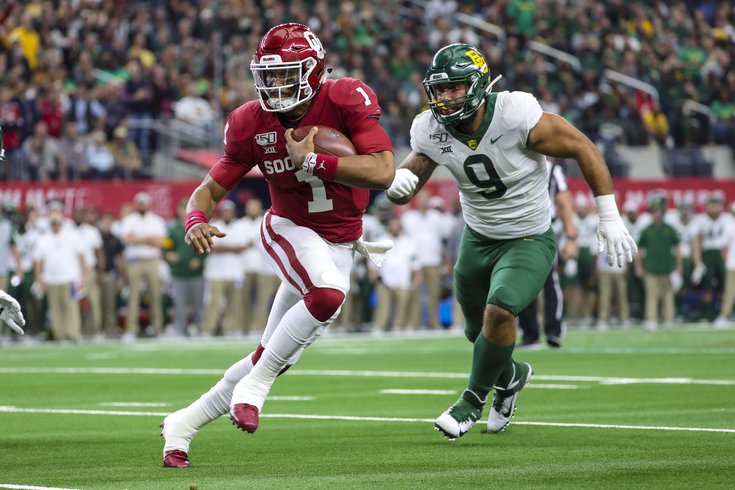 The Eagles selected Oklahoma Sooners quarterback Jalen Hurts in the second round of the 2020 NFL Draft.

There are many reasons why the Eagles' selection of Jalen Hurts at 53rd overall makes no sense at all — yes, they really took a quarterback in the second round.

They have a franchise QB. They have a franchise QB who has had issues commanding the locker room. They have a ton of other needs. They could have gotten a QB later in the draft while addressing the needs they have right now — or added a veteran in free agency. They decided against trading up for a top 3 wide receiver and instead took a lesser WR and a backup quarterback. And so on.

But maybe it makes sense. Maybe. Just hear me out.

Howie Roseman built an Eagles roster that overcame a ton of injuries in three straight seasons to make the playoffs (and, by the way, win a Super Bowl). He isn't a dummy, he has a reason why he took Hurts and passed on, well, a lot of good players who could have made a big contribution right away.

Here are five reasons the Eagles drafting Hurts was actually smart — hey, I have to try, don't I?

Say what you want to about the Eagles' backup quarterbacks last season, but Josh McCown is old, not coming back and probably wasn't good enough to lead a playoff run last January. Nate Sudfeld hasn't proven anything — and couldn't get the No.2. job back from a 40-year-old last year. Plus, he only signed a one-year deal with the Birds in the offseason.

Hurts has high upside and will learn in a great quarterbacks room. He is an upgrade over any of the options the Eagles would have at backup quarterback (and is much cheaper than, say Cam Newton or Joe Flacco), and as Eagles fans know, having a good backup quarterback is kind of, you know, important...

Whether they were chronic or just bad luck, Wentz has suffered more than his fair share of setbacks. He missed two playoff runs due to serious injuries and went down in his first playoff start this past winter. That makes three seasons in a row Wentz did not finish the season on the field. It's not Wentz' fault, but having a good backup who can step in and win is kind of important — especially on this team.

3. Hurts is athletic and can play a Taysom Hill role

I can't claim to have had this idea first, it was on ESPN and all over Twitter. But the immensely athletic Hurts could find his way onto the field as a rookie in a variety of different ways.

Early prediction: Jalen Hurts plays a Taysom Hill role for the #Eagles as they groom him. They always like to groom QBs.

"He's a great runner," head coach Doug Pederson said. "He throws well on the run he has a unique set of skills we are going to look at..."

Position-less football is a way of the future. The Eagles are just going with the trend.

The Patriots have flipped Matt Cassel for a second rounder, Jimmy Garoppolo for a second rounder and Jacoby Brissett for Phillip Dorsett. Having a seasoned veteran to groom quarterbacks has become a cottage industry. And the Pats aren't the only team to do it. Years back, the Eagles drafted Kevin Kolb and later traded him for a second-round pick and Dominque Rogers-Cromartie. So not only can Hurts be a Wentz insurance policy — he also could bring back a second round pick — or better — if they flip him.

Howie Roseman admitted as much on Friday night.

"For better or for worse, we are quarterback developers," the Eagles GM said. "We want to be a quarterback factory. No team has benefited more from developing quarterbacks than the Philadelphia Eagles."

The Eagles are taking players known for making big plays. Hurts is a winner, and he has played the backup role before. After nearly winning a Heisman Trophy, he sat behind Tua Tagovailoa in the national title game (before he left Alabama for Oklahoma). The Birds seem to be taking the best player on their board, regardless of position.

The Jalen Hurts pick may be out of the box - out of this world for some - but this was again a move to add explosiveness, creativity to the #Eagles offense. Plus they have a potential backup QB, trade piece, or someday a starter. Not defending, but explaining their thinking here.

When Roseman spoke to the media Friday after some of the dust settled on their decision, he was understandably asked why the team chose to go with a QB.

"We think this is the most important position in sports...."

"This gives us another weapon in that room..."

Unfortunately, as far as I can tell, only one person can throw at a time.