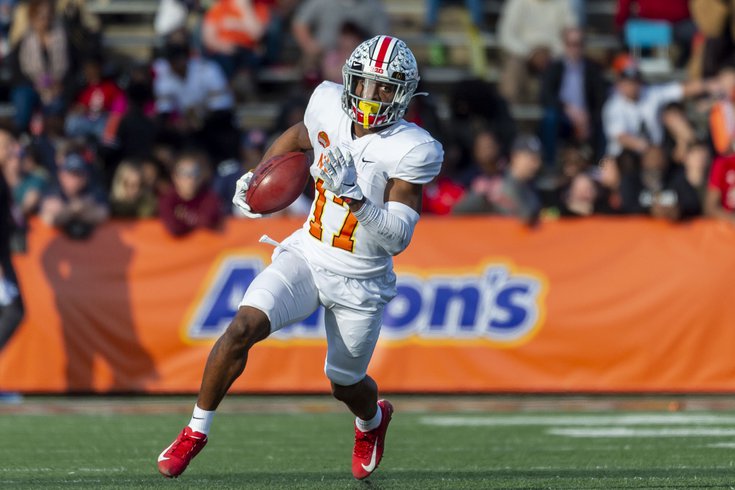 The Philadelphia Eagles are currently slated to make three picks in the fourth round of the 2020 NFL Draft. Assuming they don't go completely off the rails like they did in round 2, here are 15 players who make sense for them in round 4.

• Tyler Johnson, WR, Minnesota: Johnson doesn't have blazing speed, but still managed a career 15.5 yards per catch average. He is a savvy route runner who makes difficult catches, and could transition to the NFL as a bigger slot guy.

• Donovan Peoples-Jones, WR, Michigan: People-Jones was a big-time recruit coming out of high school, and he absolutely tore up the Combine, but I just don't see what others do in terms of what he did at Michigan, where his production was downright bad. Some have him in their top 10 wide receivers. Huh? Why? It reminds me of Brad Pitt (playing Billy Beane) in Moneyball, asking, "If he's a good hitter, why doesn't he hit good?" Still, the physical attributes are hard to ignore, and on Day 3 he could be a bargain.

• Collin Johnson, WR, Texas: I thought someone might take Johnson earlier than they should because he's 6'6 and has some contested catch ability. Johnson lacks speed and has battled soft tissue injuries, but would make more sense for the Eagles now that they have their speed guy in Jalen Reagor.

• Isaiah Hodgins, WR, Oregon State: Very fun highlight reel, in which he makes all kinds of difficult catches. 6'4, 210, 4.61. Red zone guy in the NFL. Again, now that Reagor is in the fold, a guy like him makes more sense.

• K.J. Hill, WR, Ohio State: Hill is a shifty, smooth, competitive slot receiver prospect, with a natural feel for the game. Some had him pegged as a Day 2 guy. His appropriate value in a stacked WR draft is Rounds 4 or 5.

• Ben Bartch, OT/OG, St. John's (MN): Bartch was the only D-III player to compete at the NFL Combine, after a good week at the Senior Bowl. He enrolled in college as a tight end, but was asked to put on weight and move to left tackle, which he did without losing his athleticism. In the pros, Bartch could probably play LT or LG, which makes him an interesting fit for the Eagles. In the short term, Jeff Stoutland could cross-train him at both spots, and Bartch could serve as depth on the left side of the line, as a backup to both Andre Dillard and Isaac Seumalo.

• Tyler Biadasz, C, Wisconsin: Biadasz is a nasty, intelligent center who is not going to get out in space and make athletic plays, but he can move the line of scrimmage and put guys on the ground. Biadasz has only played center at Wisconsin, there's little reason to believe he couldn't also fill in at guard.

• Bradlee Anae, DE, Utah: Anae had 30 sacks over his career at Utah, and 13 sacks in his senior season. He lacks ideal length and athleticism, so if you're looking for a speed guy to smoke OTs around the edge, he won't be for you. But, he's a skilled, violent player with a great motor who wrecked the Senior Bowl game, posting three sacks, and a QB hit that led to an INT.

• Curtis Weaver, DE, Boise State: The Eagles believe that sacks in college lead to sacks in the NFL, and Weaver had 34 of them in three years at Boise.

• Khalid Kareem, DE, Notre Dame: Notre Dame had a pair of edge rushers in 2019 who will be selected in the 2020 NFL Draft, and Kareem is the lesser known of the two. While Julian Okwara is more explosive, Kareem is bigger, more stout against the run, and he seems to be closer to what the Eagles prioritize in their defensive ends. He had 5.5 sacks, 10.5 tackles for loss, and three forced fumbles last season.

• Jason Strowbridge, DE/DT, North Carolina: Strowbridge has inside-outside versatility, and could fill a role similar to that of Michael Bennett in 2018. He impressed at the Senior Bowl.

• Bryce Hall, CB, Virginia: Hall racked up a lofty 21 pass breakups in 2018. He also had two picks and two forced fumbles in 2018, and was named to the AP preseason All-America team heading into 2019. Had he come out a year ago, he likely would have at least been a second-round pick, but he decided to stay for his senior season at Virginia. Hall was getting some first-round projections in 2019, but a broken left leg and dislocated left ankle ended his 2019 season early. With good size at 6'1, 200, the Eagles could have interest in Hall as an outside corner. He has the same good traits that Rasul Douglas has (size, ball skills, physicality), but with better long speed.

• Darnay Holmes, CB, UCLA: Holmes has decent enough athleticism, he competes like hell for the ball in the air, and (Schwartz alert) he plays with swagger. Holmes also brings special teams ability to the table, both as a returner and on kick/punt coverage.

• Amik Robertson, CB, Louisiana Tech: In three season at Louisiana Tech, Robertson has filled up the stat sheet across the board, particularly with a high number of interceptions and pass breakups. At 5'8, 187, Robertson doesn't have ideal size, but he doesn't play small. Most teams will view Robertson as a slot corner at the next level, but I wonder if the Eagles might view him as a safety.

• K'Von Wallace, S, Clemson: Wallace has some of the "positionless" qualities the Eagles are striving for in their secondary, in that he played safety and slot corner for Clemson. He had a productive 2019, making 72 tackles, with 2 sacks, 2 INT, and 10 pass breakups. He's an aggressive, heady player who would make sense in a Malcolm Jenkins-similar role. In the short term, he's an out-of-the-box special teamer who could complete for No. 3 safety / big nickel / dime LB snaps.