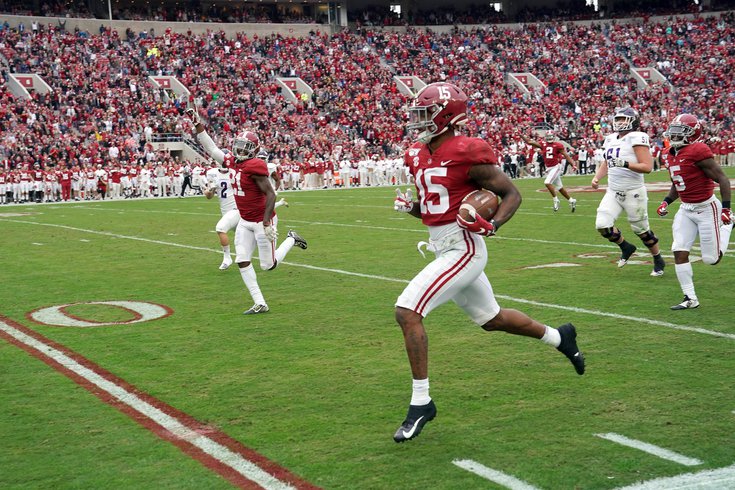 In Round 1 of the 2020 NFL Draft, I would say that two of the Philadelphia Eagles' three divisional rivals did well for themselves. Here we'll analyze each pick that the "other" NFC East teams made on Day 2.

Washington didn't have a second round pick because they traded it to the Colts last year to move up into the first round for edge rusher Montez Sweat. They were widely praised for that move at the time, but now it's not looking so wise. The details of that trade:

Because Washington finished 3-13 and are picking 2nd overall in this draft, they are giving up 300 points on the draft value chart on that deal.

• Pick 66: Antonio Gibson, RB/WR, Memphis: Gibson was a versatile playmaker for Memphis, working out of the slot, as a running back, and as a kick returner. He is stoutly built, and he has some juice, as he ran a 4.39 40 at the Combine at 228 pounds.

I think he'll play running back for Washington.

• Pick 36: Xavier McKinney, S, Alabama: McKinney is a versatile playmaker who is drew comparisons to another former Bama DB in Minkah Fitzpatrick. McKinney was only a starter for two years in college, but he put up impressive numbers in a defense where there sometimes aren't enough big plays to go around:

McKinney can play either safety spot, and he was comfortable covering running backs, tight ends, and slot receivers. He's also an aggressive tackler, and a savvy blitzer. A highlight reel:

At pick No. 36, that's very good value for a Giants team desperately in need of some leadership on defense.

• Pick 99: Matt Peart, OT, UConn: Peart played for a UConn program that went 9-39 in the four years he was there, and he still managed to get noticed as an NFL prospect competing at the Senior Bowl. In his time there, he racked up a lot of experience starting all four years, playing left tackle for two season, right tackle for two season, and even occasionally filling in at guard.

Peart's floor is as a swing tackle, and he has a chance to develop into a good starter. Really good pick.

• Pick 51: Trevon Diggs, CB, Alabama: Diggs is the younger brother of Vikings receiver Stefon Diggs, and he started out initially at Alabama at receiver before switching to the defensive side of the ball. Here's a little glimpse of Diggs as a receiver and returner early in his Bama career:

Some thought Diggs could maybe sneak into the back end of the first round. Long speed is what likely kept him out. Pick 51 was appropriate value.

• Pick 82: Neville Gallimore, DT, Oklahoma: Gallimore was thought of an athletic beast who landed at No. 2 in Bruce Feldman's 2019 college football Freaks List (via The Athletic). However, while he had a fast 40 time, overall his Combine performance didn't match the hype.

Gallimore's career production (8.5 sacks) at Oklahoma was underwhelming, and he didn't stand out at the Senior Bowl. The Cowboys have a pair of older DTs in Gerald McCoy and Dontari Poe, so Gallimore does make sense as a player they will look to develop into a more consistent player.