Before and after: Abington's pledge agreement with Stephen A. Schwarzman 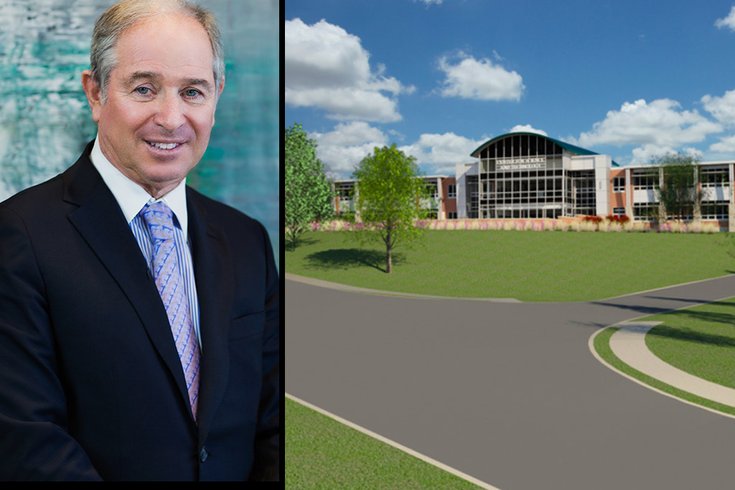 Administration in the Abington Township School District released copies of two pledge agreements with $25 million donor and alumnus Stephen A. Schwarzman: the older version officially rescinded Tuesday night after public furor over the planned renaming of the high school, and a new version, to be voted on at the April 24 school board meeting.

That Abington School District has released details of its revised agreement with billionaire alumnus Stephen Schwarzman, who has pledged $25 million to the district.

Instead, Abington will name its new science and technology center after Schwarzman. That center – expected to open in 2020 – will be called the Stephen A. Schwarzman Center for Science and Technology.

Schwarzman's $25 million contribution will be used to construct the new center and renovate Abington Senior High School, which is expected to be completed by September 2022.

The school board rescinded the initial pledge agreement at a Tuesday night meeting attended by hundreds of residents and proposed an amended version with the Stephen A. Schwarzman Foundation that will be voted on at the April 24 school board meeting. At the urging of the public, the district posted both agreements on the district website on Wednesday morning.

Here are the major differences between the two agreements:

RESCINDED PLEDGE AGREEMENT: Schwarzman was awarded "the right to participate, in person or by phone, in the planning, design and construction phases" of both the science and technology center and the renovation of the high school:

The Grantor will have the right to review and comment on the list of general contractors to be engaged by Abington, and to review and comment on the final design drawings and cost estimates, as well as any material changes thereto. The Grantor may request that Abington arrange meetings with and obtain materials from the architect, construction manager, general contractor or any other person involved in the Building Project, and Abington will use its best efforts to convene such meetings, and obtain such materials.

Schwarzman would be provided with "detailed progress reports" – including a cost breakdown – and required Abington to solicit input from Schwarzman.

REVISED PLEDGE AGREEMENT:  Would not explicitly give Schwarzman an opportunity to participate in the planning, design or construction phases, nor does it provide him an avenue for input on the process. But it would provide for "semiannual written reports" to Schwarzman regarding the projects.

RESCINDED: In addition to renaming the high school after Schwarzman, it granted those naming rights in perpetuity, as well as the opportunity to help develop a revised logo.

It agreed to rename the new science and technology wing as the Stephen A. Schwarzman Center for Science and Technology, the auxiliary gym as the Billy Wilson Gym, the athletic complex as the Bobby Bryant Athletic Center and Abington's athletic hall of fame as the Coach Jack Armstrong Athletic Hall of Fame.

It also called for "additional spaces ... named in honor of Mark Schwarzman and Warren Schwarzman" – the twin, younger brothers of Stephen Schwarzman.

It also explicitly called for a portrait of Schwarzman to be commissioned by him and prominently displayed in the high school:

Abington agrees to prominently display a portrait of the Grantor, to be commissioned by the Grantor, in the High School. The details of the commissioning of the portrait and its display will be mutually agreed upon by ASD and the Grantor.

Schwarzman is permitted to remove his name from the building at any time. Abington may do the same immediately if Schwarzman "has engaged in any act of moral turpitude which results in a criminal conviction."

REVISED: The high school will remain known as the Abington Senior High School, in perpetuity.

The new science and technology wing as the Stephen A. Schwarzman Center for Science and Technology, the auxiliary gym as the Billy Wilson Gym, the athletic complex as the Bobby Bryant Athletic Center and Abington's athletic hall of fame as the Coach Jack Armstrong Athletic Hall of Fame.

The renaming of unidentified spaces for Schwarzman's brothers has been stricken.

There is no mention of a portrait of Schwarzman, but there is provision for recognition of names displayed via "plaques or pictures":

The locations and details of the specific manner in which the names will be displayed, as well as plaques or pictures appropriately recognizing such individual's contributions to Abington, will be mutually agreed by ASD and Grantor.

Schwarzman continues to be permitted to remove his name from the building at any time, and the district has the same right if Schwarzman "has engaged in any act of moral turpitude which results in a criminal conviction." 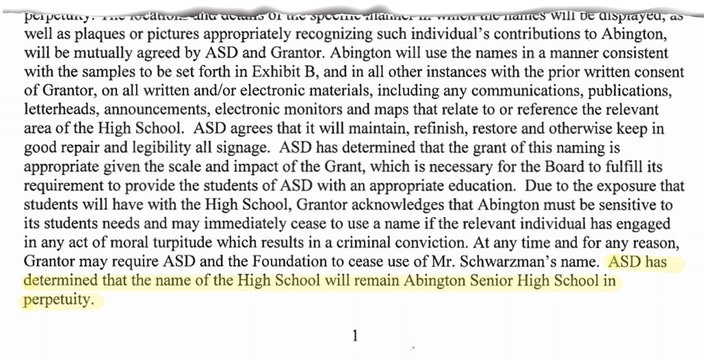 A provision permitted Schwarzman to monitor the use of the grant:

Abington agrees that the Grantor may monitor use of the Grant through site visits and reviewing books and records – including financial documents – related to the agreement.

Grantor may also require an outside audit of any or all expenses paid from the Grant Amount, the cost of any such audit to be borne by Abington.

REVISED: Schwarzman's payment schedule remains unchanged, but provisions allowing Schwarzman to monitor use of the grant through site visits and review of financial documents were removed.

COMPUTERS FOR ALL INITIATIVE

RESCINDED: Abington will provide "an appropriate electronic device" – like a Chromebook – to each high school student beginning in September 2022.

It is ASD's stated intent to make a coding ... curriculum available to all students at the High School, with the goal of 100% of students participating in a coding ... class during their high school career by 2022 and thereafter.

And while Schwarzman will receive "semiannual written reports" regarding the initiative, there is no mention of in-person meetings.

RESCINDED: A provision outlined what would happen to the naming rights if Abington High School was substantially or completely destroyed, or if it fell out of use.

In such an event, "any new high school must be named" for Schwarzman. If another high school was not constructed, the district would have to recognize Schwarzman in an alternative manner.

REVISED: That provision is not included.