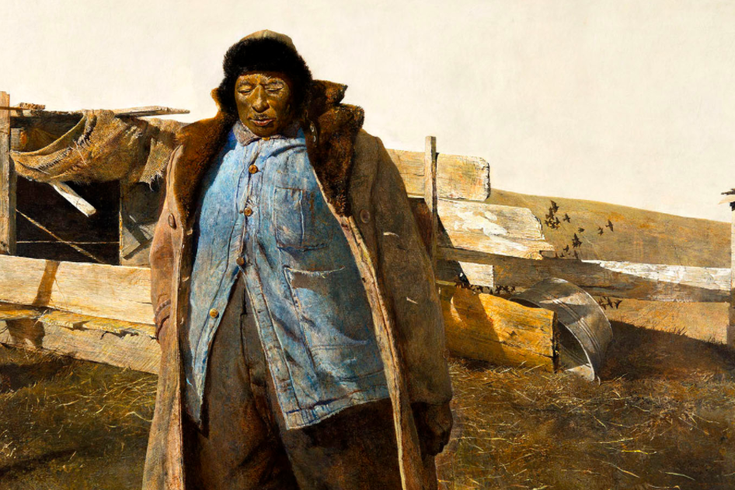 Andrew Wyeth (1917-2009) "Adam," 1963. Thousands never before seen works by the artist will now be displayed publicly at the Brandywine River Museum of Art is Chadds Ford, Wyeth's hometown, and elsewhere.

Thousands of never before seen works by Delaware County artist Andrew Wyeth will now be displayed for the general public.

The painter who often portrayed small town America made about 7,000 works over the course of his career, but only 15% of the collection has been released.

Now, the Brandywine River Art Museum in Chadds Ford, Wyeth's hometown, will display the works on a rotating basis year round, a release says.

The museum currently has half of the collection. The other half is at by the Farnsworth Art Museum in Maine, near the artist's summer home, which will also display some of the paintings.

Both museums will loan some of Andrew's unseen works to other institutions so more people can access them.

They're working through a unique partnership with the Wyeth Foundation for American Art, which was started by the artist with his wife and business manager Betsy in 2002.

The purpose of this trust was to maintain ownership of the collection and keep it intact rather than have it sold after the couple died. They entered an agreement with Brandywine to have the museum manage the collection after their death.

During their lifetime, the Wyeths were reluctant about displaying many of Andrew's works.

“They had a somewhat curatorial view of how they liked to share what’s seen,” Virginia Logan, executive director of the Brandywine Conservancy & Museum of Art, the museum’s parent organization, told the New York Times.

But Wyeth died in 2009 and his wife died in 2020, so now Brandywine is in complete control of the collection

“This is a new opportunity, without those restrictions, to really look at things with a fresh eye and expand the reach beyond the Brandywine and the Farnsworth," Logan said.

Brandywine is currently hiring a new curator who will oversee the collections in both Pennsylvania and Maine. It will receive up to $1 million per year from the foundation to offset that cost and other expenses related to the collection.

The unseen paintings include a set of watercolor paintings and sketches Wyeth didn't deem refined enough to be displayed and many oil works from early in his career.

The Brandywine is currently displaying a collection of paintings Wyeth made of African Americans living in Chadds Ford in the mid twentieth century.

He was born in the town in 1917 and was trained by his father N.C. Wyeth, an illustrator. Andrew's son James Wyeth also became a painter based in Chadds Ford. He was trained by Andrew's sister Carolyn Wyeth and is carrying on his father's style.