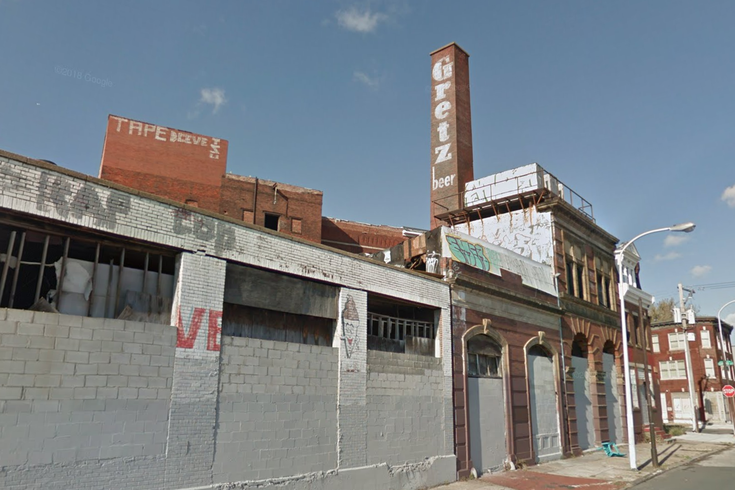 A view of the old Gretz Brewery site.

The old Gretz Brewery building on the corner Oxford Street and Germantown Avenue in South Kensington closed in 1961. If a new proposal from developer Tony Rufo gets an eventual green light, the building could finally see its second act.

Developer Tony Rufo, who purchased the property in August of 2003, has proposed a mixed-use development that would include 220 apartments, seven commercial spaces, and 48 parking spots, along with more than 80 spots for bicycles.

The proposed project, submitted by architect Anthony Tsirantonakis, went up on the City Planning Commission’s Civic Design Review page on Tuesday. You can read the full proposal here.

The submission says Rufo has already held three informal meetings with design committees and two preliminary meetings open to the community, and that a Zoning Board of Adjustment hearing had been scheduled. The submission didn’t say when the hearing would be.

Rufo has been trying to turn the property into residences since at least 2012, when he told Hidden City Philadelphia that the site was “a gem sitting there waiting to be worked on.”

The submission also proposes bike share stations, green space on 40 percent of the roof, and a “green wall” on each of the south- and east-facing facades.

Last year, the Gretz Brewery was added to the National Register of Historic Places, meaning the project will have to restore the brewery site in the event of new development.

The building has been part of South Kensington since the 1880s, and the submission mentions making the new elements “respectful” and deliberately simple “in order to emphasize the restored existing building.”

Earlier this month, apartments were proposed at another historic site in the Kensington area, the former Harbison's Dairies Plant where there is a plan to turn that building into residential and office space.