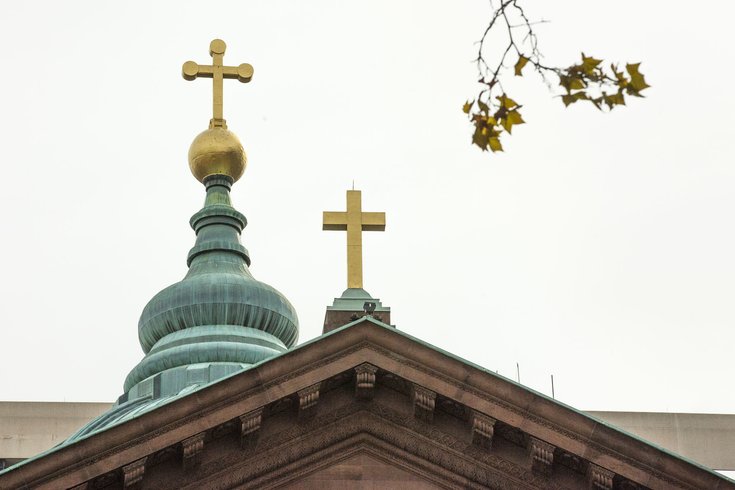 Archbishop Charles Chaput, or the Archdiocese of Philadelphia, offered his resignation to the Vatican in September, as is required by church law. It could take years to appoint his successor, but speculation is that progressive priest, the Rev. James Martin, is a candidate for the job. The photo above show crucifixes atop the Bascilica of Sts. Peter and Paul in Philadelphia.

Nearly 2,200 signatures have been added to an online petition created Thursday, urging to stop the potential appointment of a progressive priest, who has called for the Catholic church to be more tolerant of LGBTQ members, as the new archbishop of Philadelphia.

While a successor hasn't been formally announced in the wake of Archbishop Charles Chaput presenting his resignation to Pope Francis in September, the Rev. James Martin is rumored to be among those under consideration to be the next leader of the Archdiocese of Philadelphia.

Those preemptively opposing Martin's appointment are signing a Change.org petition

Martin, a Plymouth Meeting, Montgomery County native and a Jesuit priest, is the author of several books, including "Building a Bridge: How the Catholic Church and the LGBT Community Can Enter into a Relationship of Respect, Compassion, and Sensitivity."

His ideas are viewed as more progressive than traditional Catholic teachings on LGBTQ issues, calling for tolerance, acceptance, and support within church communities. And in several ways Martin's consideration for archbishop comes as a stark contrast to Archbishop Chaput, who has positioned himself as a leader in the conservative wing of the Catholic church, at times in direct opposition with Pope Francis.

Chaput has advocated that gay and some divorced couples should not be allowed to receive Communion, and he said "there's no such thing as LGBTQ" during a gathering of bishops in Rome last year.

In September, just days before announcing his intent to resign, the archbishop publicly challenged some of Martin's ideas, following a speaking engagement Martin had at St. Joseph's University, discussing themes from "Building a Bridge."

"Supporters of Father Martin's efforts will note, correctly, that several Church leaders have endorsed his work. Those Churchmen are responsible for their words – as I am for mine, as pastor of the Church in Philadelphia," Chaput wrote in a CatholicPhilly.com column. "And specifically in that role as pastor, I want to extend the (Congregation for the Doctrine of the Faith)'s caution to all the faithful of the Church in Philadelphia, regarding the ambiguity about same-sex related issues found throughout the statements and activities of Father James Martin."

On Transgender Day of Remembrance, we pray for all those transgender people who were killed because of hateful violence. (Many of these were trans people of color.) Every life is sacred, and invested with infinite dignity. https://t.co/rpFPB0PvgP #TransDayofRemembrance

In his own response on CatholicPhilly, Martin thanked Chaput for his "kind communications" and further explained that much of his intent is to "encourage Catholics to see LGBT people as more than just sexual beings, to see them in their totality, much as Jesus saw people on the margins, people who were also seen as 'other' in his time."

The process to appoint a new archbishop can take years. An archbishop must offer to resign on his 75th birthday under church law, but the decision of an actual date of retirement, as well as an appointed successor, ultimately comes from the pope. So as far as the petition goes, we might be here awhile.