Beer-chugging comedian, who was heckled by Trump supporter at Jersey club, performs on 'Jimmy Kimmel Live!' 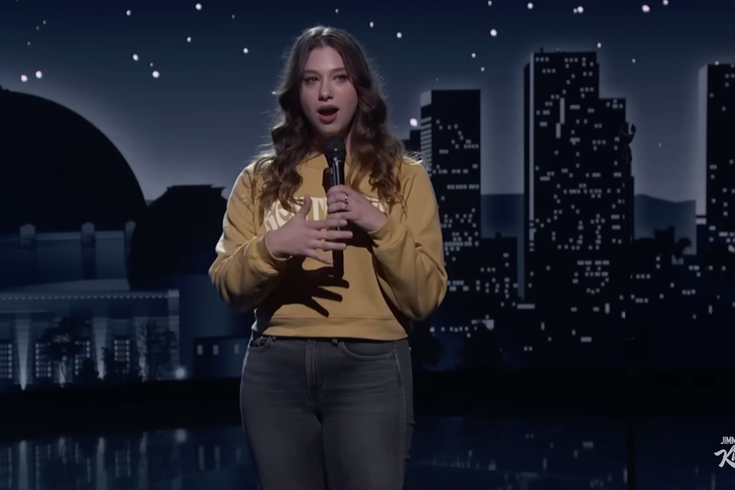 Ariel Elias performed on 'Jimmy Kimmel Live!' on Oct. 24, a couple of weeks after she went viral for chugging a beer thrown on stage by an audience member during her performance at Uncle Vinny's Comedy Club in Point Pleasant Beach, New Jersey.

New York-based comedian Arial Elias has made the most of the ugly incident she dealt with earlier this month at Uncle Vinny's Comedy Club in Point Pleasant Beach, parlaying her encounter with a petulant Donald Trump supporter into a stand-up act on "Jimmy Kimmel Live!"

Elias went viral after her performance at the Jersey Shore club on Oct. 8, when a heckler interrupted her set to ask her about her political leanings. Elias hadn't even been talking about politics. She attempted to keep the situation from escalating, but the heckler pressed ahead.

"I could just tell by your jokes you voted for (Joe) Biden," the heckler said.

"I can tell by the fact that you're still talking when nobody one wants you to that you voted for Trump," Elias fired back, drawing applause from the rest of the audience.

Moments later, a beer can was hurled on stage and struck the brick wall behind Elias, who casually picked up the beer and chugged it.

The video of the incident that Elias tweeted has been viewed more than 5.7 million times. Kimmel, an unrelenting Trump critic, shared his support for Elias, who then asked if she could perform on his show. Her appearance aired on Oct. 24.

Some complain that late-night TV hosts depend on Trump jokes and "Trump Derangement Syndrome" to keep audiences engaged, but the video from Elias' performance in New Jersey just highlights how childish some Trump supporters continue to be in settings that have nothing to do with their thoughts about politics.

The problem Trump's detractors have is not just Trump. It's the losers who invoke him in order to act like this and fancy themselves as renegades, too.

Dino Ibelli, the owner of Uncle Vinnie's Comedy Club, told NBC4 in New York that the person who threw the beer can was not the woman who heckled Elias, but another man who was in the audience. A group of friends the man was with identified him, but he has not faced any charges. Elias reportedly said she wouldn't return to Point Pleasant Beach to press charges unless she was being paid to go back there for some reason, but she told the Asbury Park Press she's disappointed he won't face legal consequences.

Elias has an interesting backstory as a Jewish woman who was born in New Jersey and raised in Kentucky, a red state that doesn't have a large Jewish population.

"My friends when I was growing up would tell me that I was going to hell, but it always came from a place of love, which is very confusing" Elias joked during her Kimmel set.

The poise Elias showed in New Jersey drew attention from the likes of fellow comedians Jim Gaffigan and Patton Oswalt. If she was shaken by this experience at all, she's choosing to look on the bright side and joke about it.

I'd really appreciate it if anyone could please just let my teachers know that chugging a beer has in fact been great for my career.

This experience has really taught me to trust my gut, and to fill that gut with beer.

I hate how some people are saying that my success is the best revenge against that heckler. It's total erasure of my ex boyfriends.