The Northern Liberties brewpub has been the subject of ghost stories, but staff is feeling less of a 'presence' 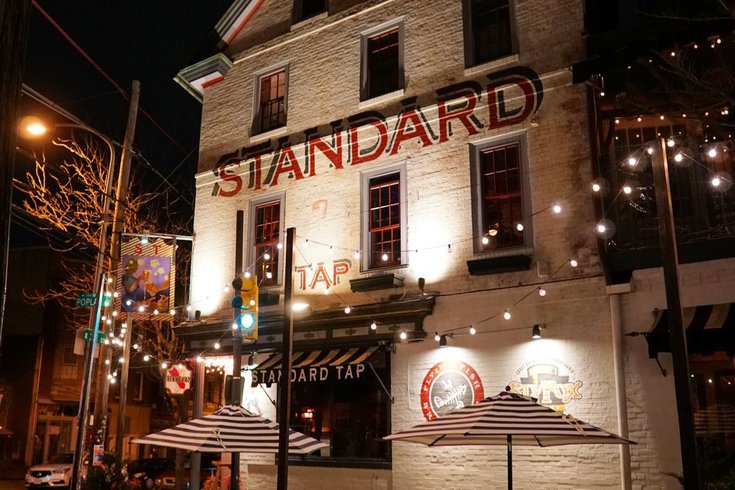 Standard Tap, the longtime Northern Liberties bar from William Reed and Paul Kimport, is supposedly haunted. Visitors have claimed to have seen multiple ghosts in the building. Its history stretches back to the 1800s, when the first railroad tack in America was laid outside its doors.

Standard Tap, the bar on Second and Poplar streets where Familetti serves local brews and egg white cocktails, has been the subject of ghost stories practically since its opening on New Year's Eve 1999.

Some people have seen a little boy, but many more have seen an ethereal woman in a blue dress. Even when the specters aren't around, Familetti says, unexplained phenomena haunt the building.

"Checkbooks would fly off shelves," he told PhillyVoice. "Water bottles, it's probably just a pressure thing, but they would sometimes explode. People have heard someone go, 'pssst.' ... I used to be terrified to walk through the dining room upstairs at night. You would just get a feeling."

But now, almost 23 years after the stories began, Familetti says they might be over.

"It's strange," he said. "It feels like the presence sort of left in the last couple years."

Employees and guests of the popular Northern Liberties brewpub have been telling ghost stories for decades — at least according to Philadelphia Magazine, which recorded some of the tales in a 2011 article. By that account, Standard Tap has been visited by a specter dressed in a Civil War uniform, and a female spirit with white hair and a long, billowing dress — most likely the lady in blue Familetti mentioned.

Staff also told Philly Mag about Mr. Smeigelski, a poltergeist prone to rattling shelves, turning on the faucet, knocking over bags and even hurling utensils across the room. Some believe he once lived above the bar, and may have died there.

Mr. Smeigelski apparently made little impression in his lifetime — his distinctive last name returned no results from the Historical Society of Pennsylvania, the Free Library digital collection or the archives of the Philadelphia Inquirer and Philadelphia Daily News — but other visitors to the Standard Tap have.

According to historical material from the Free Library, Bull's Head Hotel, also known as Bull's Head Tavern, was erected circa 1806 on Second and Poplar Streets, where Standard Tap now stands. Three years later, Thomas Leiper laid what is considered the first rail track in America in front of its doors, which may explain why images of the building still exist today.

Bull's Head Hotel wasn't solely associated with American ingenuity and engineering, however. Its name is linked to a number of tragic accidents documented in the Inquirer's historical archives. On Nov. 2, 1880, for instance, a 50-year-old resident of the Bull's Head Hotel was crushed by a collapsing brick wall, suffering a leg injury. An even worse fate befell Seneca Fell, the former proprietor of Bull's Head Hotel. On Dec. 17, 1890, he was found dead in his bed from an apparent gas leak, along with his 11-year-old granddaughter.

The building was also a lounge called Ken's Den at some point in its lengthy history, but it's unclear if Ken — or any of his patrons — suffered freak accidents.

For all the creepy history and bad vibes, it sounds like the spirits of Second and Poplar have finally been laid to rest. Still, if you find yourself at Standard Tap this Halloween weekend and spy a woman with a voluminous blue dress, run.