Jersey Shore to be featured on special edition Monopoly board 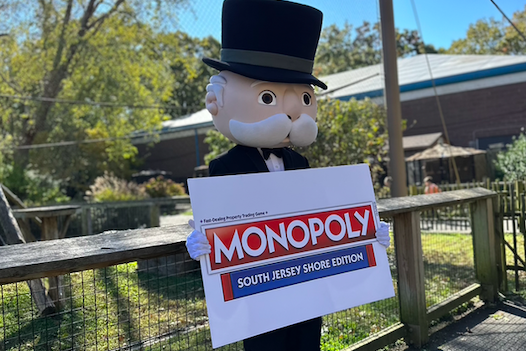 A "South Jersey Shore Edition" Monopoly game board is in the works through a collaboration between game companies Top Trumps and Hasbro. Residents are encouraged to submit ideas for landmarks and attractions to include on the classic game board. Above, the Mr. Monopoly mascot poses during a press conference announcing plans for the game at Cape May County Zoo.

A board game originally based on Atlantic City is about to reflect even more South Jersey culture.

Monopoly "South Jersey Shore Edition" is in the works through a collaboration between Hasbro and game company Top Trumps USA. The game, set to be released in June 2023, will feature South Jersey themed squares, Community Chests, Chance playing cards and money.

MORE: Journey through Philly's suburbs in new Monopoly game that pays homage to the Main Line

To capture the essence of the region, the companies are looking for recommendations from the public for well-established South Jersey businesses and nonprofits to include, replacing the perennial board game’s famous Atlantic City squares.

“South Jersey has an incredibly unique identity as ‘The Place for Family Fun,’” Brooke Gorman, Top Trumps USA representative, said. “From bustling nightlife to beautiful beaches, boardwalks and everything in between, we are excited to create an accurate portrayal of what visitors and residents love about the shore.”

Last week, a press conference was held at the Cape May County Zoo featuring the Mr. Monopoly mascot and life sized game cards to announce the upcoming local version of the game and ask for the public's input.

Public submissions and business inquiries can be sent to southjerseyshore@toptrumps.com for consideration.

Earlier this month, Hasbro and Top Trumps USA released "Monopoly Main Line Edition," which pays homage to the Philadelphia suburbs by featuring attractions and landmarks from parts of Montgomery County. The companies had previously asked for public input on that project, as well.

Top Trumps partnered with Hasbro in 2020 to begin releasing city-specific versions of Monopoly. American towns and cities featured so far include Brooklyn, Palm Springs, San Antonio and the Hamptons. A Pittsburgh version is also in the works.

Once released, the "South Jersey Shore Edition" of Monopoly will be sold in stores and online at retailers, including CVS and Amazon.