No city has hosted the military rivals more times – and it's not even close. But four other Northeast sites will get their turns before it returns 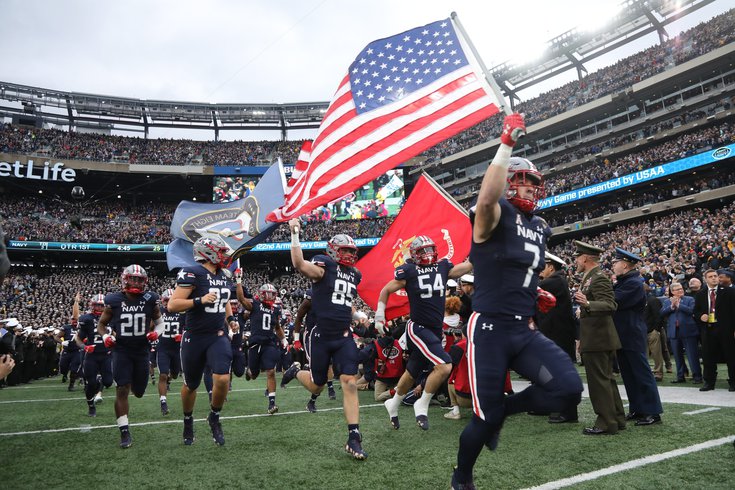 Navy takes the field for the 2021 Army-Navy game played at MetLife Stadium in New Jersey. Though Philadelphia has traditionally hosted the military rivals, the game won't return again until 2027.

The Army Black Knights and the Navy Midshipmen will face off Saturday at Lincoln Financial Field in "America's Game" — a college football showdown with 132 years of history.

For most of that history, the Army-Navy game has taken place in Philadelphia. The city has hosted the rivals a whopping 89 times. The New York City region is next, at 21. But next year, West Point and the Naval Academy will take their teams to Gillette Stadium in Foxborough, Massachusetts, kicking off a five-city rotation that will keep them away from Philly until 2027.

The military academies announced the change earlier this year, outlining a plan to visit different cities along the East Coast between 2023 and 2026. Boston is up first, marking the first time the New England region has hosted the Army-Navy game. It will coincide with the 250th anniversary of the Boston Tea Party, as well as the 225th anniversary of the USS Constitution's first voyage.

In 2024, the game will be played at FedEx Field in Landover, Maryland, just outside the nation's capital. Baltimore plays host in 2025, followed by East Rutherford, New Jersey in 2026. The latter game will coincide with the 25th anniversary of 9/11.

The schedule apparently was set after a competitive bid process, in which Dallas, Chicago, Charlotte and Orlando also participated. In a statement, Naval Academy Director of Athletics Chet Gladchuck said the selected cities will "provide the academies with an opportunity to share the economic impact, history and tradition of Army-Navy with a number of communities in diverse geographic areas."

As Philadelphia Business Journal notes, this five-year rotation will mark the longest period the Army-Navy game has spent away from Philly since the 1930s. It will be a significant financial loss — according to WHYY, the game typically generates $30-$35 million in annual revenue for the city.

"I do think more and more they had other cities approaching them aggressively about hosting the game and in the end they softened to the idea of moving it around," Larry Needle, executive director of the Philadelphia Sports Congress, told WHYY. "It's a reality of the incredibly competitive marketplace for business and events that we see and we're dealing with as a convention bureau and sports commission everyday."

The news is a disappointment for many in Philadelphia, which has long called itself "Home of the Game." But officials stressed it was no slight on the city.

"There is nothing wrong with Philadelphia," Gladchuck said in a press conference last week. "It is a great city that does a magnificent job of hosting the game, the facility is world-class and the people embrace the two academies. There are no negatives when it comes to Philadelphia."

Tickets to the last local Army-Navy game for a while are available on secondary market sites, including Vivid Seats, StubHub and Seat Geek. Gates open at 11 a.m., but the Black Knights and Midshipmen won't take the field until 11:55 a.m. The game kicks off at 3 p.m. It also will be broadcast on CBS.