Ask Hickey: Is it cool to lie to get out of jury duty or nah?

Just do your civic duty, bro

I have jury duty tomorrow. Is it wrong for me to exaggerate or lie to not be selected? I'm self employed and had not worked for several months, but am working now. Does that justify my behavior? (J.B., via Facebook)

Serving on a jury is one of the most important civic duties one can perform as an American. In that capacity, you! are the backbone of the judicial system.

Depending on the nature of the trial, you can put a bad person behind bars, protect the freedom of an innocent person and hold people (or businesses) accountable for their actions or lack thereof.

That said, jury duty can be a pain in the butt. In your case, J., it's about providing for yourself and your family. Does that justify your behavior? If you exaggerate to duck service, maybe; if you outright lie, no.

Let me explain: I've exaggerated to get my reporting date pushed back to a more amenable reporting date. As in, I really didn't feel like going on the date, so I said I had a conflict and reported bright and early, with bells on, for that rescheduled date.

This has happened a couple times. As a journalist, though, I've never been selected to serve on a jury. That kinda bums me out, what with that spurning preventing me from getting a real feel for what happens in the jury room during deliberations. I'm genuinely curious about that, so it kinda bums me out each time they say I'm free to leave the Criminal Justice Center with a $7 (or something) check in hand. Maybe it's not as intriguing as I imagine, but I'd like to find out for myself.

Now, onto the lying.

I polled my Twitter audience about lying to avoid jury duty earlier this week. A lot of them said no, they hadn't. Some of them were probably lying. Compulsive behavior of that sort is ugly.

Have you ever lied to get out of jury duty?

While I understand your need to work, I can't abide by wielding deception to perform your civic duty especially because being overly honest can bring the same results.

If you're a big fan of cops – to the point of playing dress-up and vouching for them even in cases where they do very bad things – say so. Ain't no defense attorney worth their salt gonna hold back on striking you from the jury pool.

If you're a big hater of cops to the point of protesting outside the Roundhouse for no other reason than having 15 spare minutes, you let them know that, too. Ain't no prosecutor worth their salt gonna let you miss more than a few hours of work.

If you have staunch beliefs related to the criminal-justice system, don't hold back. It works!

You see, lying leaves you open to perjury charges while being open paves the way for early dismissal.

Keep this tale in mind when you get over to the courthouse; @WorldofIsaac says from the mid-2000s:

I get called for jury duty, first time. There's a few hundred people there obviously, and we get called into the courtroom and the questions start flying.

"Have you sat on a jury before? Is there anything that would make you unable to serve? Blah, blah, blah.

The judge excuses a bunch of people for health and language reasons. Then, this 50-something white woman says she can't serve on this drug-possession case because she served on a burglary one 10 years prior. It's clear she's trying to get out of it.

So, the judge says, "That doesn't make any sense, can you not be impartial in this case?" She says, "No I absolutely cannot." She's a huge bitch about it too, giving everyone attitude.

The judge says fine and sends her to another courtroom for another case.

I get chosen for the possession case which lasts less than a day. I see this lady at lunch and apparently she gets caught in a murder case that's supposed to last several weeks.

It was a perfect dose of karma.

This is a cautionary tale, and one for which a friend of mine who works over at the courthouse vouched. Here's what he had to say when I asked about people lying to get out of jury duty in Philly:

It's hard to lie to get out of jury duty. Judges have heard it all.

If I were to lie, I'd go with, "I have a bipolar, ADD bladder condition which means I have to pee every 15 minutes. Will that be a problem, your honor?

Fill the form out agreeable. They separate panels into A and B groups: A is agreeable answered forms; B are people who answered as problem children.

The B listers get sent to sit all day, get voire dire done at like 4:30 p.m. if selection is not complete. But, A listers get questioned first.

So, answer honestly, and drop those bombs if necessary.

All of which is to say lying isn't your best way to get out of jury duty; being overly honest (albeit with a hopefully exaggerated peeing condition) is.

When is it OK to throw a dirt clod at someone? (@TheCaptainLou, via Twitter)

This is a timely question.

As I’m sure you already know, one was thrown at me while covering the discovery of human remains and coffins at an Old City construction site a week or so back. I fully recovered thanks to the thoughts and prayers of you and others; well, at least those of you who didn’t call me a snowflake for not liking the fact that some beefy dirtbag took it upon himself to be the defender of dignity or whatever he was thinking.

This is an example of when it’s not OK to throw a dirt clod at somebody. I won’t even excuse the fact that the meatball who had me outnumbered 50-to-1 fell victim to a Trumpian campaign against the media. It’s why I filed a police report the next day at the 6th Police District (about which I haven’t gotten any updates, mind you.)

All that said, there are times when it’s OK to throw dirt clods at people.

The Green Day set at Woodstock ’94 was definitely one of those times. (I was there. It ruled.)

When you’re an elephant at the zoo, that’s another example of acceptable dirt/mud flinging.

It’s OK to throw dirt clod at criminals to help slow their efforts to flee the scene, but only if you also call the cops. As much as vigilante justice sounds awesome, you don’t want to get yourself in trouble for the act itself, right?

If a call goes against the Cubs (or insert your favorite baseball team here), you might think it’s OK for the player or manager to throw dirt, but they’ll probably just get thrown out of the game, so maybe it’s not OK.

You might want to sit down for this next one, though. In no way, shape or form is it OK to throw dirt at Diner en Blanc attendees, though.

Society’s gotten crazy enough as it is. That's why it's important to comport oneself with some semblance of decorum.

What if Mötley Crüe never actually shouted at the devil? And what if Van Halen never ran with him? (RandyMan E., via Facebook)

First things first, we need to present a legal disclaimer before we go on: I know not if members of these two seminal eighties hair-metal bands either shouted at, or ran with, Satan. That’s the tricky thing about art, toeing that line between imagination and reality.

That being said, Mötley Crüe did name its second album (and a track thereon) “Shout at the Devil” and early Van Halen did sing a song called “Running with the Devil.”

SoaD was the group’s second album, and it went four times platinum in America after its 1983 release. What that means is it paved the way for record deals and expanded offerings from Vince, Mick, Nikki and Tommy.

If they never “shouted at the devil,” society may have lost the quintessential strip-club anthem “Girls, Girls, Girls,” Tommy may never have met (or filmed with) Pam Anderson and the world may never have experienced the wonders of drumming stunts, like those in this NSFW video below:

As for the second part, had Van Halen never gone running with the devil, humanity would have been spared the Sammy Hagar and Gary Cherone eras of that glorious hair-metal hard-rock band. Ugh.

If we’re being honest with ourselves, David Lee Roth was the quintessential front man for the cokey seventies and eighties. He didn't so much walk amongst us as he floated in a drug-addled cloud above us. See for yourself:

While Roth stuck around for a few years (and a couple reunion stints) after the track “Running with the Devil” dropped in 1978, their pact with Beelzebub meant the glory days would ultimately fade. I am convinced of this. Not even the track "Ice Cream Man" could reverse what they'd done.

Verdicts: We should all be happy that Crüe shouted at the devil, for all the subsequent benefits made the world a better place. However, we should be sad that Van Halen ran with him (or her) for it hastened somehow the departure of Diamond Dave from atop the lead-singer pinnacle.

Questions I wish y'all asked me ...

Someone — anyone — step to the plate with something like this and I'll be the happiest writer this side of the Mississippi: 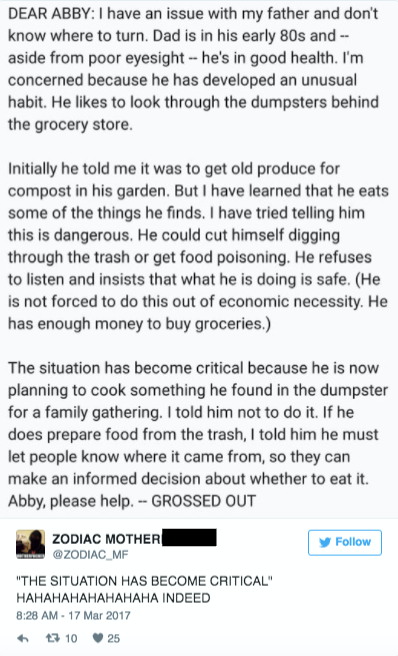