Ask Hickey: Should I cede my right of way to 'sidewalk mafias'? 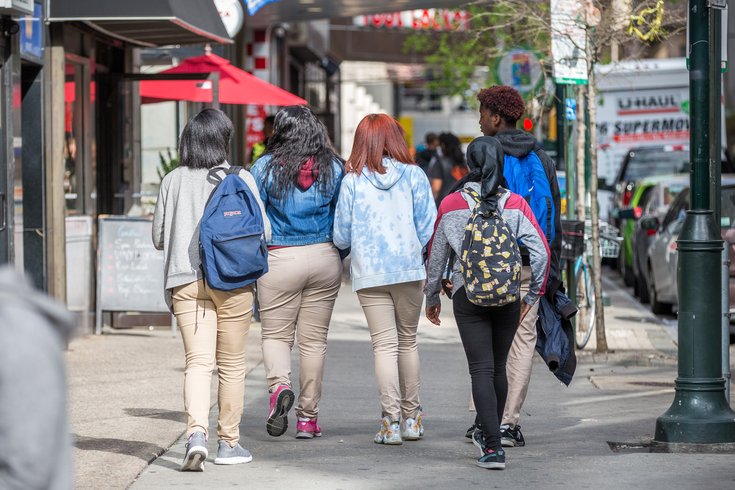 As with this group of students walking along Chestnut Street in Center City, many choose to eschew even the basic tenets of pedestrian etiquette when the weather gets nice.

What to do about sidewalk mafias (aka with weather getting nicer, groups of people who think sidewalk is theirs and don't move)? Should you cough loudly, say excuse me or refuse to move and walk into them? -- Fairmount Jaclyn

I used to live in Fairmount, Jaclyn, but this problem transcends that neighborhood alone.

Throughout the city, as the temperatures rise, people wake up from hibernation, take to the streets to socialize and, in doing so, often inconvenience others in the fashion you describe.

While I’d argue this sidewalk-blocking-packs-of-people dynamic is less of an annoyance than construction interference or bicyclists weaving through pedestrians – come at me, rock-throwing mopes and/or pedal-happy bros and sis's – it’s only moderately so.

Sure, we should all try to be more courteous and – wait for it – mindful of others in shared public spaces. However, it’s downright impossible to be all namaste when people value themselves over you.

When people presume you’ll just cede your God-given right-of-way because they physically make you do so, it’s insulting and presumptuous. It brings unnecessary anger into an already volatile world.

The right thing to do – per Gandhi, Buddha, Miss Manners and the like – is to rise above being offended by this micro-aggression. Why risk getting into a confrontation over something so small? That’s a question they might ask.

Well, they are better people than me. And, since you asked me (and not them) what I think, here’s my response: Stand your ground.

That’s not to say you should walk into them with shoulders flying, of course. Stay on your path.

Should it turn into a standoff, they’ll most assuredly blink first because their RICO associates won’t want to stick around for more than a few seconds (unless they’re Worldstar enthusiasts, then all bets are off: WORLDSTAR).

By taking over the entire sidewalk, they are, in effect, saying that they are better than you and you should move so they can continue babbling about whatever nonsense they’re babbling about.

Well, Jaclyn, they are NOT better than you. You are good enough, you are smart enough and, dog gonnit, people like you more than they like sidewalk mafiosos.

Now, for some caveats.

You’re a lady, but I’m not, so this won’t apply to you. However, menfolk like me should make way for groups of ladies to pass by on the sidewalk. Chivalry lives as long as I do.

You may not want to follow that same approach, though. Nor do I think you should. They can walk around you. Give ‘em a side-eye or a head-to-toe look followed by a “pfft” while you’re at it. That’ll get ‘em all self-conscious and give you a measure of well-deserved revenge. It'll haunt them for weeks if done properly. You know what I'm talkin' about.

Obviously, it ain’t right to barrel through a pack of elder citizens (or people walking with the injured/infirm) either. Let them pass without comment. They earned that right. Let’s arbitrarily set the age cutoff for that at 69 years old. (Nice.)

Same goes for tourists. We should totally be welcoming of people who visit our fine city.

For one thing, they’re spending money here to the point of even buying sodas without whining about the soda tax. (That last part makes them superior to a lot of locals!)

For another, they’re out of their element and trying to find their way around, so they probably don’t realize they’re inconveniencing others. Ask them if they need help finding somewhere if they look really lost.

Parents (or nannies) walking with children also get a pass. I shouldn't even have to say that.

If it’s a pack of teens or suburban trash, you don’t move; they do. Same goes for mobile phone-toting suits. We must have standards and though these run the risk of violence, it is a red line that I’m inclined to honor.

In closing, I need to make this important point: Please don’t go looking for a fight. Violence solves (almost) nothing.

If a sidewalk mafia looks unhinged, do not agitate. Just take an extra two or three steps and then go on with your day.

Instead of paying it backwards by getting your crew together with the expressed purpose of making others get out of your way, just complain about them to everybody you know.

Also, never move out of the way of a sidewalk bicyclist. Those scofflaws deserve no quarter.

Time for some clap back

"In regards to your recent smear article in the PhillyVoice, “Even Alex Jones dismissed this 'conspiracy theory,' but Northeast Philly man won't relent," please be advised that your irresponsible apology for Pedo-Satanism is complletely (sic) misguided. Or perhaps YOU are part of the cult as well. Which is it?" --Robbie W. via e-mail

The article of which you type was neither a smear nor an apology.

Rather, it afforded someone the opportunity to tell my readers why he heads up to Roosevelt Boulevard to draw attention to the “Pizzagate” conspira-story.

In fact, I've received several correspondences noting an appreciation of allowing Howard Caplan to talk publicly about something that many people write off as lunacy. That includes from Caplan himself, who told me to blow these sorts of crazy responses off.

Sorry that you misinterpreted it in a fashion that led you to believe I’m part of a Pedo-Satanism cult, for I am not.