Ask Hickey: What's the deal with that annoying nail-clipping sound?

So, this image: Is that Jesus or Hippy Putin standing behind Donald Trump? (Jason Miller, via Twitter) 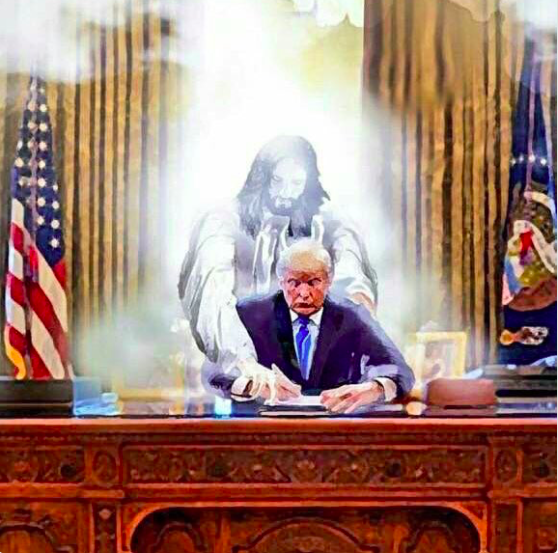 This meme shows President Donald Trump getting some guidance from above. But is his mentor Jesus Christ or a hippie version of Vladimir Putin?

Hoo boy, that image sure did make the social-media rounds in the days following Trump’s inauguration, didn’t it?

While it most assuredly was intended to be some sort of statement on how the new president has divine guidance in the White House – which makes absolutely zero sense, considering his penchant for violating commandments and the very nature of lordly empathy – haters had quite a bit of fun with it.

As such, these images are getting widely circulated in the “Christian Facebook” realm.

It doesn't make sense to me. Then again, nothing much does in America Vers. 2017.

Still, your question did get me to thinking about something: How would a Vladimir Putin present as a hippie?

The Russian dude is in topless touch with nature, something that hippies tend to be. Putin seems to galavant about the countryside with a mission of intimidation via nipple exposure rather than being in harmony with Mother Earth, though.

He would have to set aside his warmongering and KGBitter disposition should he want to blend in amongst the composters. As a youth, he was apparently exposed to hippie subculture, so it wouldn’t be that much of a stretch for him to return to the fold.

From afar, he doesn’t appear to have the capacity to grow flowing locks as hippies are wont to do, but that’s just aesthetics. I’m sure nobody would begrudge him the right to frolic amongst patchouli clouds whilst listening to Jefferson Airplane.

Old habits die hard, though. I just don’t think Putin could resist wielding some polonium-210 to silence others in the hippie community.

Which, is to say, even if Putin could become a new-age hippie and sell turquoise gems in whatever Russia's equivalent of Sedona is, I doubt he'd want to. Sad!

The sound when you trim your nails, is it the nail clippers snapping together or the sound of the nails being clipped? (M.J. via Twitter)

Good question. I’d think it’s the sound of the clippers actually cutting through the nail. I mean, the clippers don’t make that sound when you snap them together without a nail in between them, right?

I can’t pretend to be an expert in this area, though. I can’t shake an unfortunate nail-biting habit. It's wrong, but it's me. Take it or leave it.

I called over to The Rittenhouse Spa & Club seeking input to help address your question. Abigail, who answered the phone, mulled it over briefly and thought it’s probably a combination of the two.

She, too, noted the depth of a question that people don’t consider on a regular basis, but deferred to a nail technician for a more formal breakdown.

"Technically, it's a combination of both," she said, after consulting with nail technician Kimmie Brady, who noted that there's no sound related to either of those activities performed separately.

"It's the impact of the blade against the nail."

Calls to several other nail salons and nail technician training schools in Philly were met with laughs and bewildered sighs.

Shannon, an advisor at a beauty school (the name of which will be left out of this because the conversation didn't adhere to corporate public-relations clearance protocols), concurred and expanded.

"I'm assuming the reader considers that sound a pet peeve?" she said of a sound that grates on many folks' nerves.