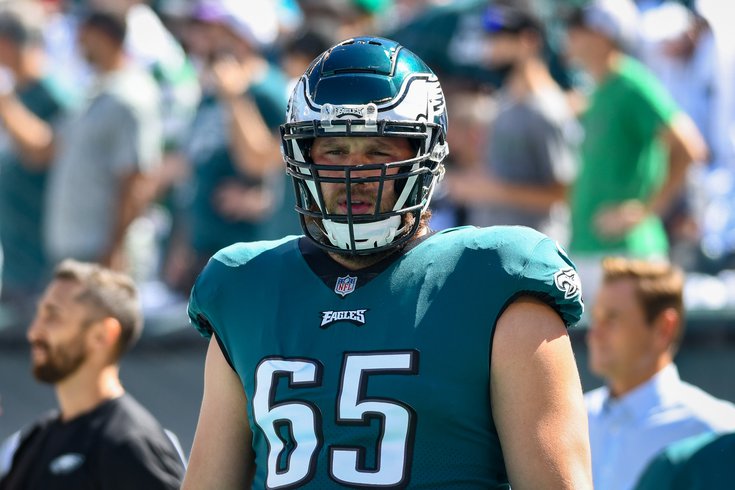 After a dreadful season in 2020 during which they allowed an NFL high 65 sacks, the Philadelphia Eagles cut that number in half in 2021, allowing just 32 sacks.

Every year we assign blame for each of the sacks the Eagles allow. NFL stats say that they allowed 32 sacks during the regular season. Going game by game, I only identified 30. They did allow two sacks against the Buccaneers during the playoffs, so whatever, we'll include those.

Here is how we would place blame for the sacks on the season:

• The headline might lead one to believe that this is a negative article. To be clear, it is not. There wasn't a single offensive lineman who gave up more than 4 sacks, and this was blocking for a quarterback who was the slowest to get the ball out in the league, at an average of 3.12 seconds. It helped that the Eagles were the most run-heavy team in the NFL, but the Eagles' pass protection was outstanding nevertheless.

• Lane Johnson had a stellar season, only allowing (by our judgment) 0.5 sacks, just as he did a year ago. Technically, as you'll read below (if you get that far), we dinged both Johnson and Jordan Mailata for a half sack on one play in which both players got beaten soundly. The defender who beat Mailata just happened to get to Hurts first, so if you were to let Johnson off the hook on that technicality, he gave up zero sacks.

• Jordan Mailata's 3.5 sacks allowed were down from 7 the year before. Oddly, two of them occurred on consecutive snaps, with new teammate Haason Reddick beating him for both. Reddick will help Mailata improve further against speed rushers in training camp.

• Landon Dickerson gave up a pair of sacks early in the season, but had a clean sheet in his final 8 games.

• Jalen Hurts was at fault for the most sacks allowed, however, 5 is a low number for a quarterback. We dinged Carson Wentz for 13.5 during the 2020 season, and Hurts for 7. Hurts generally did a good job of not taking many sacks when he had opportunities to either escape the pocket or throw the ball away.

For the purpose of showing one's work, here's a video of each sack, with an explanation of what we saw on each sack thereafter:

Sack 1: Johnson does his job, allowing Jacob Tuioti-Mariner (91) to run too far wide around the bend to create any real pressure on Hurts in the pocket, but when the ball doesn’t come out and Hurts leaves the pocket to his left, he runs into Tuioti-Mariner, who gets a lucky sack. We’re not dinging Johnson for this one. Coverage sack.

Sack 2: This was a very good rush by the Niners’ front four, as all four guys helped collapse the pocket. On the edge, Joey Bosa (97) got Mailata’s legs to buckle, and he ended up with the sack, so we’ll ding Mailata here.

Sack 3: Goedert is a good blocker, but it’s not a great idea to leave any TE one-on-one vs. Bosa. Still, this one is on Goedert.

Sack 4: Nate Herbig and Andre Dillard are beaten by the stunt executed by Randy Gregory (94) and Osa Odighizuwa (97). Dillard holds Gregory, which allows Hurts to escape temporarily before the cavalry closes in. Herbig and Dillard can split responsibility here.

Sack 6: The Eagles were in hurry-up mode at the end of the first half, and instead of calling a timeout (they had two left) they tried to run a play. The Chiefs sent six, L’Jarius Snead (38) came free, Hurts fumbled, and hijinks ensued. We’ll call this a scheme sack, though it's also possible here that Kenny Gainwell should have identified Snead and picked him up.

Sack 7: Hurts holds onto the ball for a while here, so there’s an argument to put this sack either on him or to call it a coverage sack, but I think the biggest culprit here is Herbig, who is pushed back into Hurts’ lap by Derrick Nnadi (91).

Sack 8: Hurts holds onto the ball too long here, and there were options open.

Sack 9: Mailata is smoked by Haason Reddick, and Hurts takes a big hit.

Sack 10: There was something funky with the Eagles’ timing on this play, as Mailata clearly isn’t expecting the ball to be snapped when it was. Reddick takes advantage and sacks Hurts on the second consecutive play. We kind of have to give this one to Mailata, but maybe with an asterisk.

Sack 11: DeVonta Smith and Quez Watkins are the two options in routes on this RPO, and Hurts does what he can to minimize the loss. Coverage sack.

Sack 12: Jason Kelce is being asked to pull from his center position and block Shaq Barrett (58) on the edge. Tough assignment. Barrett avoids him, and then trips up Hurts.

Sack 14: Dillard is immediately beaten by Ngakoue to the inside, which forces Hurts to flee the pocket, but Ngakoue eventually hunts him down.

Sack 15: Jack Driscoll gives up a lot of ground, mostly voluntarily, before tripping up Hurts with his own leg.

Sack 16: Dickerson is beaten by Dre’Mont Jones (93), who is able to get a piece of the football during Hurts’ windup.

Sack 17: This was a quick screen that wasn’t there, so Hurts basically just took a knee. Coverage sack.

Sack 18: This is a tough one to call. While trying to block the inside stunt, Dickerson pushes Shy Tuttle (99) into Kelce, which helps give Tuttle inside position. When Dickerson has to leave Tuttle to block David Onyemata (93), Tuttle comes free. Nobody really messed up on the O-line here, and Hurts still had at least three seconds to throw before he had to move in the pocket. We’ll be generous and call this one a coverage sack.

Sack 19: This is an interesting pass rush by the Saints. Watch Marcus Davenport (92), on the edge. He makes a beeline for Kelce, and tries to knock him off of Onyamata, who Kelce is blocking. Onyemata gets free for a hot second before Driscoll is there to cut him off. But then Davenport is there with a chance to make a play, but Hurts avoids him before Cameron Jordan (94) eventually cleans it up. I think this is more of a scheme sack than anyone really being at fault.

Sack 20: Boston Scott correctly identifies Julian Love (20) blitzing from the edge, but he allows Love to come to him instead of aggressively pursuing a block further away from Hurts. Love knocks Scott back into Hurts, and that’s where this play goes badly.

Sack 21: Gardner Minshew didn’t like what he saw on the RPO, so he got what he could. This was merely no gain, which still counts as a sack. Call it a coverage sack.

Sack 22: Lol. We could maybe call this a coverage sack, but when you have this much time and the ball slips out of your hand when you’re trying to throw, I think we have to give this one to Minshew.

Sack 23: Mailata may have overset a bit, allowing his man to rush inside. It didn’t help that Sua Opeta was beaten to the outside as well. But to me, this one is on Hurts, who had open receivers, including Goedert running up the seam, as you can see from this view.

Sack 24: Receivers are open, namely Tyree Jackson for a TD, and Gainwell coming across the middle. Hurts has all day but the ball never comes out.

Sack 25: Jonathan Allen (93) is a beast. This isn’t a terrible job by Sua Opeta, but he does give up enough ground that Hurts can’t escape the impressive grip of Allen.

Sack 26: Hurts has all day to throw, tries to scramble, and fumbles.

Sack 27: Jordan Howard was too quick to abandon Cole Holcomb (55).

Sack 28: Brett Toth doesn’t read Tarell Basham (93) looping inside, and once Minshew is forced to move from his spot, this play is shot.

Sack 29: Kayode Awosika is a smidge late recognizing the stunt and DeMarcus Lawrence (90) powers right past him. Opeta also got beaten soundly by Chauncey Golston (59). They can share this sack.

Sack 30: The bad version of Dillard rears its ugly head. He gets put on roller skates back into Minshew’s lap.

Sack 31: Hurts has more time than he thinks, and he’s meat.

Sack 32: Not sure how the officials missed the blatant hands to the face penalty on Steve McLendon (96) working against Opeta. As a result, he’s pushed back near Hurts, who fumbles when the ball hits Opeta on his windup. I can’t put this on Opeta when he was repeatedly getting punched in the face. We’ll put this one on the officials.