Atlantic City restaurant to serve cheeseburger inspired by 'The Menu'

For a limited time, Tennessee Avenue Beer Hall is offering the dish, which has been going viral due to the buzzy black comedy 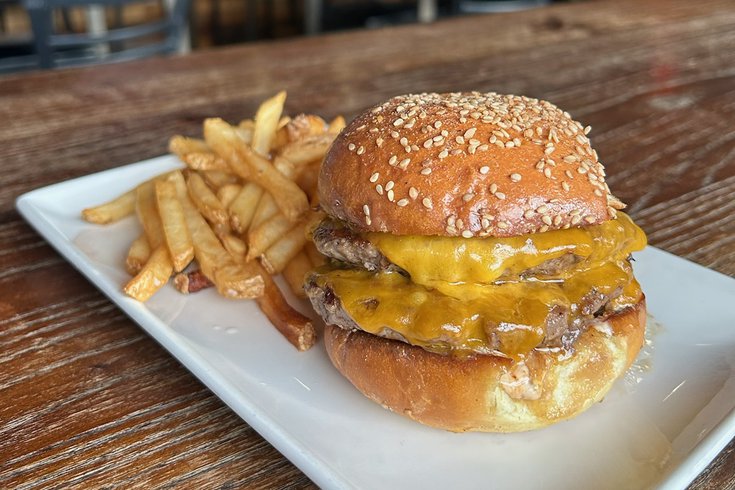 Tennessee Avenue Beer Hall in Atlantic City is serving a special cheeseburger inspired by the hit film "The Menu" for a limited time starting Wednesday, Jan. 18.

By the end of horror-comedy "The Menu," a character, bloodied by the film's events, takes a huge bite out of a burger. Without giving away spoilers, of all the intricate dishes in the movie, this All-American snack is the one that viewers seemed to crave most.

Visitors to the Jersey Shore can soon have a taste of this delicious-looking meal, when Tennessee Avenue Beer Hall, located at 133 S. Tennessee Avenue in Atlantic City, debuts its own version of "The Menu Cheeseburger" on Wednesday, Jan. 18.

Drawing inspiration from the film, the beer hall's chef Charles Soreth created the dish, and it will remain on the menu "until Chef Soreth says so."

"Like ‘The Menu,’ in which a group of spoiled diners visit the greatest restaurant in the world, it all comes down to the idea that the simple cheeseburger may be the ultimate dish we all really desire in the end,” Scott Cronick, co-owner of Tennessee Avenue Beer Hall, said in a release.

Searchlight Pictures' "The Menu," which was released in November, follows a small group of guests visiting an exclusive restaurant on a remote island, where the acclaimed chef has prepared a tasting menu with many shocking surprises.

The cast includes Anya Taylor-Joy, Nicholas Hoult, Hong Chau, John Leguizamo and Ralph Fiennes as the mysterious Chef Slowik. Taylor-Joy and Fiennes were nominated at the Golden Globes for Best Actress and Actor in a Musical or Comedy.

Along with already earning accolades (and a critics' score of 88% on Rotten Tomatoes), "The Menu" has also generated buzz around the cheeseburger that, after refusing many fancier options, one diner enjoys at a pivotal moment.

yeah yeah yeah the menu was a great film, but the best part??? the burger. I have not been able to stop thinking about it

Me looking at Chef Slowik serving that burger #TheMenu pic.twitter.com/0n289pi2Bq

I haven’t seen The Menu yet so idk if this burger is made of human flesh or something crazy like that but it looks insanely good pic.twitter.com/4Lz6OuGYsn

"The Menu" cheeseburger phenomenon has spawned a Buzzfeed recipe, a Vanity Fair interview with the film's chef John Benhase and a special collaboration between the famous Irv's burger stand in West Hollywood and Searchlight Pictures.

Tennessee Avenue Beer Hall patrons can pair "The Menu Cheeseburger" with any of the restaurant's 40 craft beers on tap, along with over 60 served in bottles and cans. During the winter, the beer hall is open Wednesdays through Sundays.

For those who still need to watch "The Menu" before digging in to the burger, it is currently in theaters and available to stream through HBO Max.