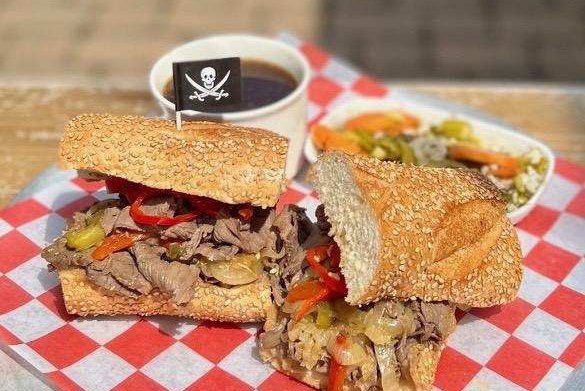 Jose Garces' Kensington restaurant Hook & Master will offer Chicago-style Italian beef sandwiches inspired by the hit TV show 'The Bear.' The sandwich only will be available on Sundays, while supplies last.

Sometimes, the food on a TV show looks so good that you wish you could taste it for yourself.

Thanks to Iron Chef Jose Garces, that is possible for fans of the summer breakout hit "The Bear," an FX series streaming on Hulu. Garces' Hook & Master restaurant in Kensington is offering an Italian beef sandwich inspired by one heavily featured on the show.

What ensues has been described as so stressful that it might cause a heart attack, as well as "rewarding" and "great." The series' first season currently has a "Certified Fresh," 100% rating from critics on Rotten Tomatoes.

The series has garnered praise from critics and culinary professionals alike for its authenticity and heart. It also has launched an explosion of memes, specifically adopting the show's authoritative "Yes, Chef" lingo, as well as "thirsty tweets" about sweaty, tousled-haired Carmy.

Along with lust for the show's characters, the series has inspired a hunger for the food they make. In particular, there has been a spike in demand for the Chicago-style Italian beef sandwiches featured in the midst of the series' kitchen chaos, with Google search interest nearly doubling after the show's June 23 release on Hulu.

Garces, who runs Philly staples such as Amada, The Olde Bar, and the soon-to-be Wells Fargo Center's Garces Eats, is feeding the fans' hunger by offering his version of the sandwich every Sunday at Hook & Master.

The sandwich features thinly sliced Italian beef, slow-cooked and simmered in jus. The meat is stacked on a Sarcone's bakery seeded roll with provolone, pickled Fresno chilis, sweet bell peppers and caramelized onions. It can be paired with jus dip on the side, and also combined with an Esposito's Italian sausage.

Interested diners can only order the special sandwich on Sunday, while supplies last. It is not listed on the restaurant's menu, so customers need to know to order the series-inspired dish.

Hook & Master, which opened at 1361 N. 2nd Street in 2021, is Garces' most recent foray into the world of pizza, seafood small plates and tiki drinks. "The Bear" inspired sandwich will be right at home with the Chicago-style pizza served at the restaurant. Garces is a Chicago native who moved to Philadelphia in 2001.

"The Bear" was renewed less than a month after its debut. The second season likely won't premiere until 2023, so these sandwiches will tide hungry fans over until they can watch Carmy whip up some more delicious fare on their screens.