The project, led by developer Bart Blatstein, will be constructed on a beachfront lot next to the Showboat 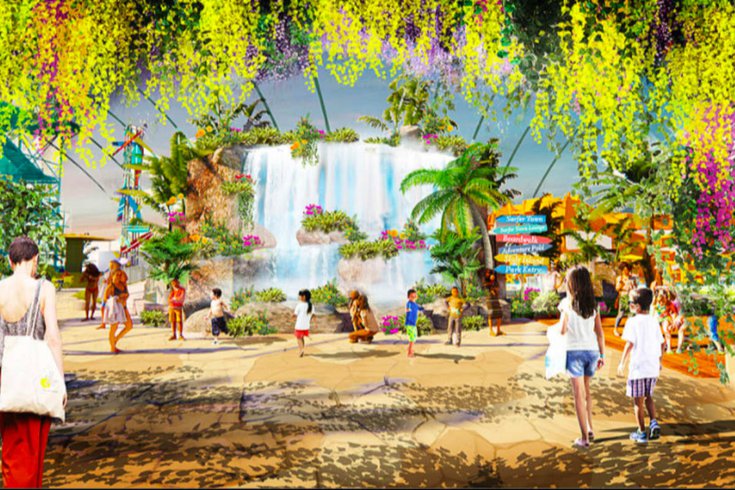 ISLAND Waterpark, a 103,000-square-foot indoor facility planned in Atlantic City, will break ground this month next to the Showboat.

Plans to construct the world's largest indoor beachfront waterpark are moving forward in Atlantic City with a groundbreaking scheduled next week at the Showboat, the non-casino hotel and entertainment venue revived by Philadelphia developer Bart Blatstein.

The project from Tower Investments, dubbed ISLAND Waterpark, will serve as an extension to the Lucky Snake arcade and sports bar that opened at Showboat last year. The groundbreaking for the year-round, 103,000-square-foot waterpark is set to take place Jan. 12 at 10:30 a.m., Blatstein said in a news release.

Located next to the Showboat on the beach block of New Jersey Avenue, the new waterpark will feature a mix of waterslides, pools, a lazy river, lounge areas, party rooms, retail outlets and a family entertainment center.

The facility also will have a retractable glass-pane roof that covers the entire project, which is estimated to cost about $100 million.

Blatstein acquired the Showboat for a reported $23 million in 2016 after it shuttered two years earlier along with three other casinos in Atlantic City. After exploring the possibility of reintroducing a casino at the site, Blatstein opted to move forward with building out a family-friendly destination. The state Casino Control Commission gave Blatstein preliminary approval in 2019 to pursue a casino license for the Showboat, but it's unclear whether that remains a goal for the property.

The ISLAND Waterpark is the first of several waterpark proposals in Atlantic City that will move forward.

Investor Ronald Young had announced plans for an indoor waterpark at the shuttered Atlantic Club casino in 2017, but financing for the project dried up and the casino went back on the market. Young had previously sought to construct a water park at the former Bader Field airport site.

Another water park proposal in 2012 led by developer Tom Sherwood had called for a sailboat-shaped hotel and indoor waterpark in the Marina District, but that plan also failed to materialize.

A timeline for the completion of ISLAND Waterpark has not yet been determined.