Lucky Snake at Showboat is on track to open May 15, 2021. It will be New Jersey's largest arcade, with a sports bar and boxing ring on site. The project is led by Tower Investments CEO Bart Blatstein, who acquired the former casino in 2016 and reopened it as a non-gambling hotel.

Blatstein, who purchased the former casino in 2016, said this week that he aims to elevate non-casino family entertainment in the Jersey Shore town.

The new concept will be branded Lucky Snake at Showboat and boast New Jersey's largest casino, with more than 100,000 square feet. The space will feature the world's largest crane game, a floor-to-ceiling model, and will offer games that range from 80s classics to the present day.

Redemption prizes at the arcade will include everything from candy to jewelry, designer purses, motorcycles and cars, and all-inclusive vacations.

A 25,000-square-foot sports bar will features an esports gaming area, a 20-square foot boxing ring and a live entertainment space that will be open seven days a week.

The Lucky Snake is set to open Saturday, May 15. 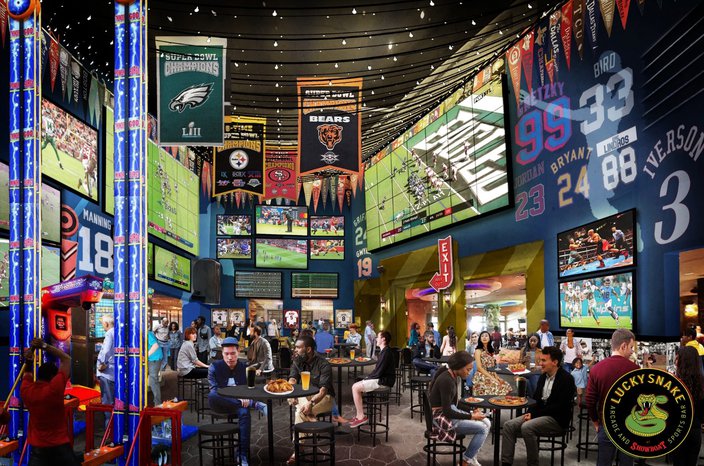 A later phase of Blatstein's plan calls for a year-round concert venue, "The Dome," that will be built with a retractable roof on a parking lot next to the hotel. A neighboring beer garden will be set up when that phase of the project is completed in 2022.

A speakeasy concept at the hotel will become the only one of its kind in Atlantic City, showcasing the famous Riviera sign that once lit up the Las Vegas Strip.

Blatstein said there also will be enhanced meeting and convention spaces at the hotel.

"This is a very exciting time for us," Blatstein said. "We at Tower Investments are extremely proud of this hotel and are thrilled to further expand on its offerings for guests of all ages, especially families. It has always been our mission to deliver an unforgettable experience for our guests and we are delighted to bring a family-friendly and year-round resort option to Atlantic City."

The plans add to the indoor water park under construction next to the hotel, a $100 million project that's expected to open next year.

The Showboat Hotel was one of two former Atlantic City casinos used as a film site for "Army of the Dead," an apocalyptic zombie movie set to debut on Netflix next month.