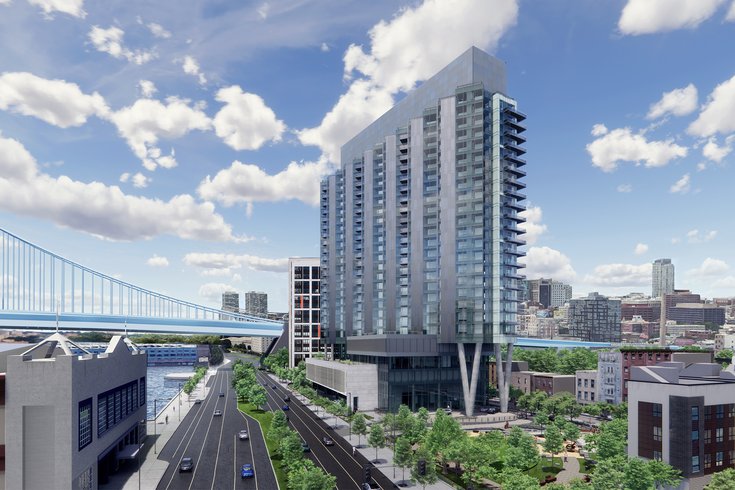 The Durst Organization is proposing the construction of a 26-story tower and park along Philadelphia's Delaware River waterfront, north of the Benjamin Franklin Bridge between Vine and Callowhill streets.

As plans take shape for a massive redevelopment of the Delaware River waterfront, one of the biggest players in that long-term initiative is proposing a 26-story tower and a public park along Columbus Boulevard.

Details of the project were revealed Friday by The Durst Organization, the New York-based developer selected last year by the Delaware River Waterfront Corp. to lead a $2.2 billion transformation of Penn's Landing.

The new tower and park are not part of the multi-phase Penn's Landing development, but form a piece of a larger effort to breathe new life into the riverfront corridor.

The mixed-use development would sit on a 1.6-acre parking lot north of the Benjamin Franklin Bridge between Vine and Callowhill streets, on the west side of Columbus Boulevard. The site was purchased from the DRWC in 2019.

Designed by Handel Architects, the tower proposal includes 360 apartments with views of Center City and the Ben Franklin Bridge. It also would feature 10,000 square feet of ground floor retail, a park with a playground and a number of public amenities still to be announced.

A public art display and a connection to the Delaware River trail are also featured in the plan, which dedicates more than a third of the parcel to open green space.

“We are excited to partner with the DRWC on a world-class project to help revitalize the Delaware River waterfront,” said Jonathan Durst, president of The Durst Organization. “This development captures the spirit of the Master Plan by bringing both more people and retail opportunities to the waterfront, enlivening the neighborhood street life and providing important new amenities, including green space.” 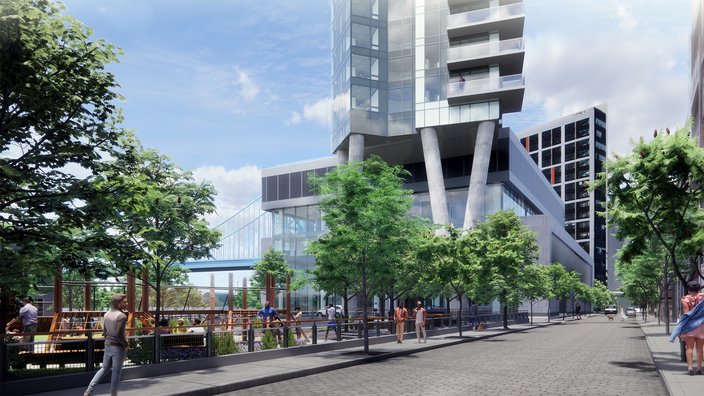 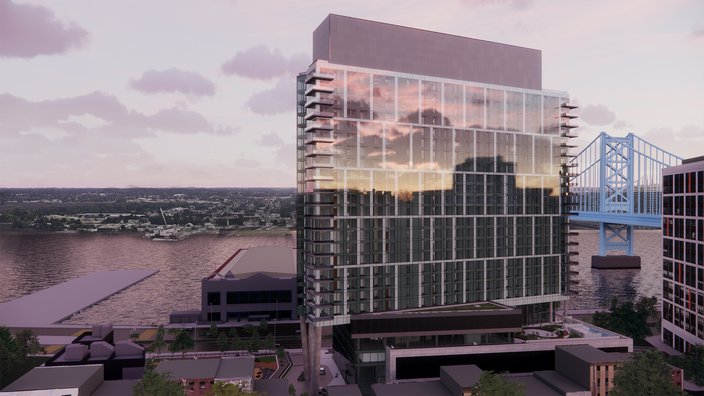 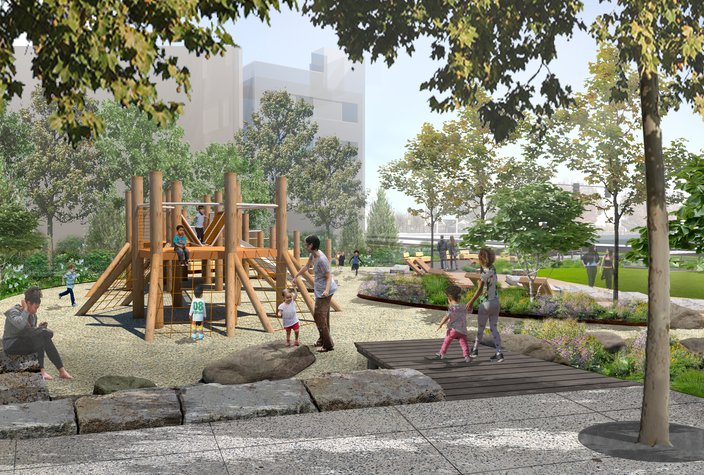 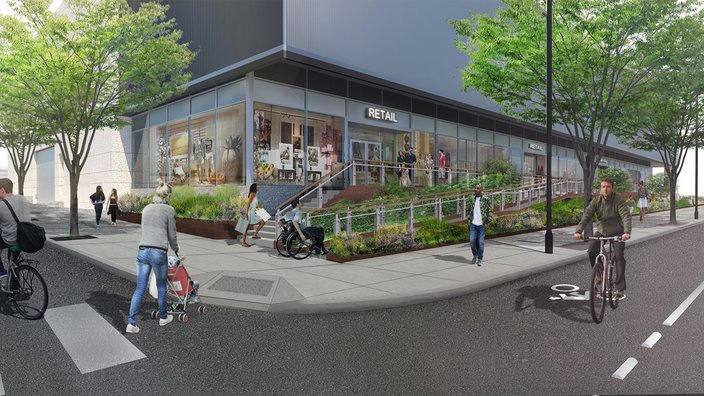 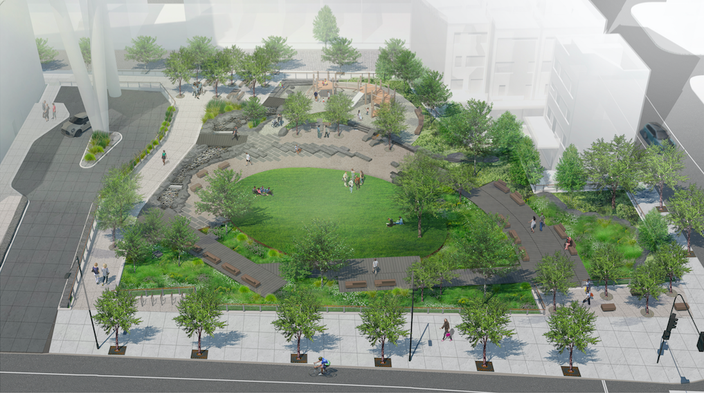 Source/Handel Architects
A significant feature of Durst's plan is to preserve the most historically significant parts of the West Shipyard, one of Philadelphia's most complete archaeological sites documenting shipbuilding activity from the 17th century through the mid-19th century. The shipyard, located beneath the surface parking lot, is on the Philadelphia Register of Historic Places.


In recent months, Durst has conducted public events showcasing artifacts found during an initial series of excavations. Additional events are planned pending the status of the COVID-19 pandemic.

As part of the preservation effort, the development will improve access to the historic Wood Street Steps between Water and Front streets, just west of the proposed tower, the developer said. The steps were built at the behest of William Penn, in a compromise with landowners, to ensure that the public would have access to the waterfront. The steps on Wood Street are among the last of the remaining public staircases.

The development seeks a LEED platinum certification and will be built to withstand future impacts of climate change, including gardens to capture rainwater runoff and protections against flooding and severe storms, the developer said. Seven out of the project's 116 planned parking spaces will be equipped electric vehicle charging.

The project also includes a contribution of more than $2.5 million to the Philadelphia Housing Trust Fund, which leads the construction and preservation of affordable housing in the city.

Last fall, DRWC chose The Durst Organization from among four finalists who submitted ambitious proposals for the Penn's Landing development further south, including one from the Philadelphia 76ers to build a new arena.

The larger proposal represents a major arm of DRWC's master plan for the central Delaware River. The keystone of that vision is a $225 million park that will cap Interstate-95 and reconnect Front Street to the riverfront between Chestnut and Walnut streets.

The Durst Organization's Penn's Landing development consists of a Market Street site spanning 7 1/2 acres to Chestnut Street and a Marina Basin site covering 4 acres from Spruce to Lombard streets. Combined, the projects will feature nearly 2,400 apartments, more than 124,000 square feet of retail space and a 225-room hotel. The two sites will each have six buildings, based on initial plans revealed last year.

The Penn's Landing project does not include any taxpayer subsidies, whereas the Sixers' $4 billion proposal would have been supplemented by $700 million in public incentives as part of a neighborhood improvement zone.

Durst's proposal for the Columbus Boulevard tower will now go through the city's review process, with ongoing public feedback.

"We look forward to receiving feedback from our neighbors and partners on this exciting new project for the riverfront," the company said. "Our goal is to build on the prior investments on the waterfront, from the Race Street Pier to Spruce Street Harbor Park, to deliver a series of projects that continue the revitalization of the Delaware River waterfront and make it a true destination for both area residents and the broader region."