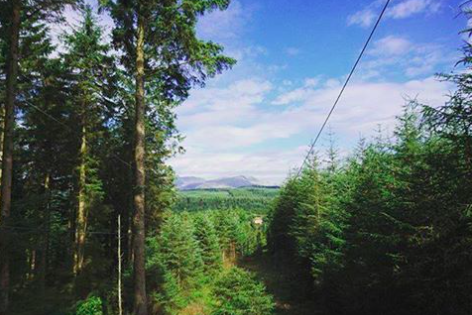 Zip-line at one of Go Ape's 15 U.S. adventure courses.

Delaware State Police have concluded their investigation after a woman tragically fell 40 feet to her death Wednesday afternoon at a zip-line course in Lums Pond State Park.

The 59-year-old victim, identified as Felton resident Tina Werner, was riding a zip-line at Go Ape's "Tree Top Adventures," located in the area of Bear, when she fell from the apparatus at approximately 1:40 p.m., investigators said. She was treated at the scene by New Castle County Paramedics and later transported to Christiana Hospital, where she was pronounced dead.

On Thursday, representatives from Go Ape confirmed through witness statements and an inspection of the zip-line equipment that the woman disconnected herself from the safety system.

"A full inspection of the course, with particular focus on the last platform at Site 4, has been undertaken and all of the course and associated safety equipment was and remains in sound operational condition. Nothing was broken or unserviceable," a company spokesperson said.

Go Ape provides 2-3 hour adventures through forest canopies at 15 U.S. locations and several sites in the United Kingdom. Guests receive a 30-minute safety briefing and training from a qualified instructor, but they do not have direct instructor supervision throughout the course unless assistance is requested.

"The Go Ape team is deeply saddened by this tragic occurrence," the spokesman said on Wednesday. "Our thoughts and prayers go out to her family and friends and in particular to those who were on the course with her at the time."

There were no other injuries reported at the park on Wednesday. State police said no foul play was suspected in the accident and an autopsy will be forthcoming.