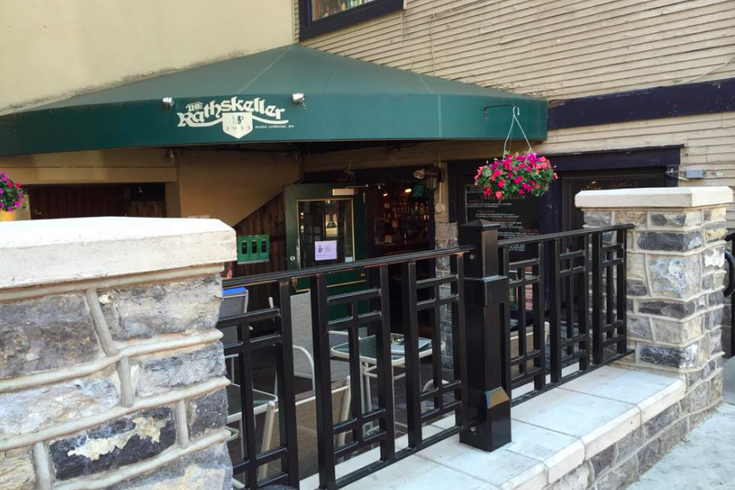 The All-American Rathskeller, located at 108 S Pugh St. in State College, will shut its doors in the near future.

Happy Valley is anything but happy this week.

Two beloved local pubs, including a bar dating back to the end of Prohibition, announced they will soon be closing.

Spats Café and the All-American Rathskeller, both popular hangouts among students and football fans at Penn State University, will shut their doors in the near future after new property owners opted not to renew the current leases at either landmark location.

"The corner of College Avenue and South Pugh Street will no longer bear the distinctive Spats Café windows festooned with Mardi Gras beads, or the late-night lines that snaked around the block as people waited to join the fun in the 'Skeller,'" restaurateurs Duke and Monica Gastiger said in a Facebook post Monday.

The All-American Rathskeller opened 85 years ago, three days after the repeal of Prohibition, and has provisionally held the title of the longest continually operating bar in Pennsylvania (the state's oldest bars, including McGillin's in Philadelphia, pre-date Prohibition). Spats Café and Speakeasy has been a community favorite for the past 30 years.

“It has been a great honor operating these two iconic establishments and serving this community and its many truly wonderful patrons and friends,” Duke Gastiger said in a statement. “We are grateful for the loyalty that people, including our incredible employees, have shown us over the years. We most regret closing with such short notice, but it was unavoidable given the timeline dictated by the new property owners.”

Both properties were acquired this past June by Neil and Chuck Herlocher, of Herlocher's Dipping Mustard fame, under the name Cornelius LLC. The Herlochers initially said "business there will continue as usual," but then suddenly changed plans without informing the Gastigers that they had already leased the spaces to another, undisclosed entity.

Through the Herlocher's Dipping Mustard Facebook page, the Herlochers released a lengthy statement explaining their side of the controversial decision and claimed they had saved the Rathskeller's building from demolition. Read it below.

More than 60 employees at both locations will lose their jobs when the bars close, though a closing date has not yet been determined.

The Gastigers, who requested an opportunity to sell the businesses to new owners under renegotiated lease terms, were given no other recourse, Duke told PhillyVoice.

"They had a meeting with my wife and I when they first bought the properties," Gastiger said. "They told us how much they valued our continued business. Then they changed direction, told us the spaces had been leased, that we wouldn't be able to afford the market rate and they had no use for the businesses."

Gastiger disputed the Herlochers' reported claim to have offered renegotiating the leases or buying the two businesses outright. The only offer on the table, Gastiger said, was to purchase the couple's liquor licenses.

"They're telling mistruths," Gastiger said. "I wish they would have at least given us the opportunity to keep the heart and soul of those two businesses in place."

Public reaction quickly turned to outcry on Facebook, where more than 200 commenters lamented the new owners' hasty decision to close the bars.

"Who are these owners who would close a long standing iconic establishment like the Skellar?" commenter Mary Elizabeth posted. "They will only alienate the community, students and alumni! Heartbreaking...."

"Sorry, I call BS, Herlocher's Dipping Mustard. If you truly value the 'historical significance of the space' and 'business as usual' --- and want to prove us wrong by not just wanting to make a buck --- then you should aim to do everything possible to retain and maintain the intrinsic historical and nostalgic value of The Rathskeller AS A LANDMARK in its own right," added commenter Michelle Kramer-Fitzgerald. "Progress doesn't always mean tearing down the past; it also means honoring and rightly preserving it."

A petition to "Save the Skeller" had already collected nearly 1,000 signatures by Tuesday afternoon.

"As a Penn State alumnus, I have many fond memories of the Skeller and continue to be a proud patron several times a year when visiting State College," wrote the anonymous author of the petition. "I ask that if you have also enjoyed an evening of friends, family, and fun at the Skeller to please take a moment and sign this petition. Thank you, We Are, and Let's Save the Skeller!"

Gastiger said he's heartbroken that his loyal employees, several of whom have been with him for 20 or so years, will now be put out of work.

"This is not your normal restaurant and bar. It's an institution," Gastiger said. "A sense of place is really, really, really important. That's sort of slipping away in Happy Valley. I can't even imagine what tenant would take that space."

As for the petition, Gastiger said he'd like to believe the public can have an effect on the future of the two bars.

"I question it considering how [the Herlochers] are acting, though," he said.

Customers are invited to share a dish, drink or memory and celebrate the staff at each restaurant in the weeks to come. Both places are expected to remain open through the new year, at a minimum.

In the meantime, the Gastigers indicated they will turn their attention to RE Farm Café, their upcoming sustainable market at Windswept farm in State College.

"We have plans to take our innovative cooking and hospitality in a new direction with an exciting new restaurant concept for the area," the Gastigers said, anticipating an opening next summer. "We are focused on building community and regenerative business, and we have big plans for our next venture."