Bad For You – Cinnamon Frosted Flakes 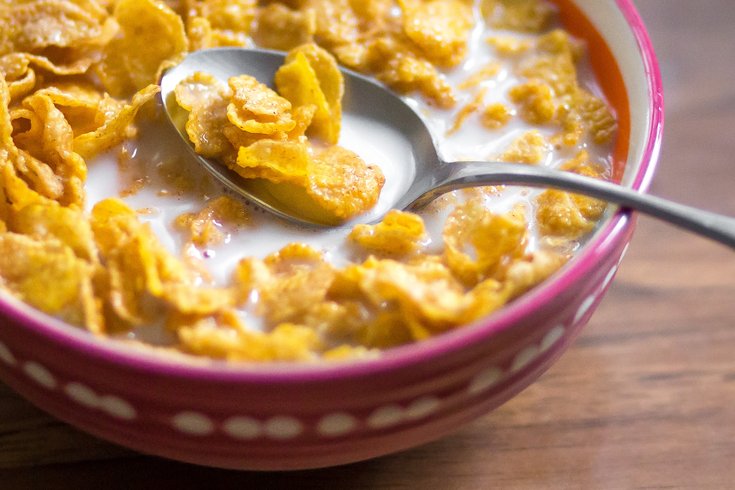 Does adding a coconut /almondmilk blend to the cereal make it even a smidgen better for you?

They say breakfast is the most important meal of the day, and I think that’s because it’s the only time you can eat cereal and not get dirty looks. If you eat cereal for dinner, some people will judge you. These people are not your friends. Cereal is great all the time, especially if you’re like me and prefer to wake up around 2 in the afternoon whenever possible.

We all have our favorite breakfast cereals. Some people like to eat healthy cereals, full of bran and vitamins. Others love super-sugary cereals. The only cereal I eat is C-3PO’s, featuring everyone’s 14th-favorite Star Wars character. Although they haven’t been made for decades, let’s just say that I have a hookup to many unsold boxes. (C-3PO is my second cousin.) 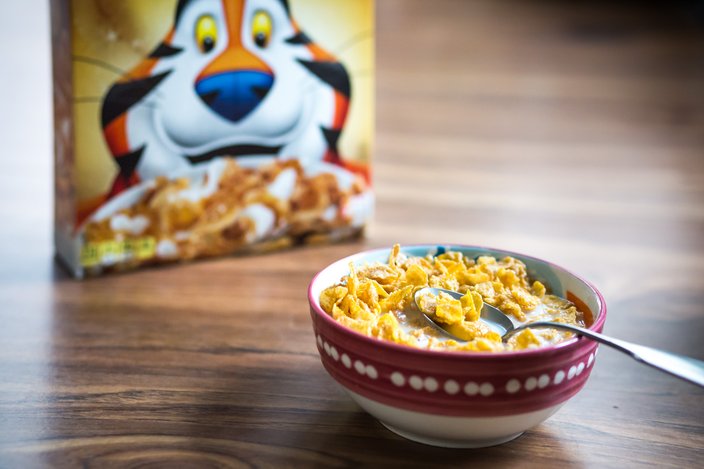 If the sugar content alone doesn't wake you up, maybe the giant tiger staring in your face will help.

One of the most popular and enduring cereals is undoubtedly Frosted Flakes. First introduced in 1952, these sugar-dusted cornflakes are still a staple for sweet tooth-having kids and adults alike, with the iconic Tony the Tiger mascot and his famous catchphrase, “They’re GRRREAT!” (He’s a tiger, so he says “Grrr” like a tiger would, you see.)

Like most products that have been around that long, the creators will try to occasionally spice things up with different flavors and variants of the original. Frosted Flakes is no different. There’s been a chocolate version, a marshmallow version, a Halloween version with chocolate and marshmallows that we previously reviewed, a honey version, a banana version and even one covered with “Birthday Confetti.”

Last November, Kellogg’s announced a brand-new edition of the famous cereal called Cinnamon Frosted Flakes. A press release announced that the product was a “long-awaited innovation,” which is technically true. However, back in 2003, Kellogg’s did release a short-lived spinoff called Tony’s Cinnamon Krunchers – rice crisps covered in cinnamon. This is the first time that the actual cornflakes have been made with cinnamon. As someone who prefers Cinnamon Life over original Life (and real life), I was intrigued.

The same press release also states that the new product was “100 percent driven by fan demand and preferences.” Apparently, for a long time, children and very high adults have been asking the question, “Wouldn’t it be cool if like... they put like... cinnamon on Frosted Flakes?” Now their dreams are like... a reality.

But does it live up to expectations?

Upon opening the box, there’s a strong smell of cinnamon, very similar to how a packet of cinnamon instant oatmeal smells. After pouring the cereal in a bowl, the flakes still have a similar shine to them, though the frost has been replaced with bits of brown specks. 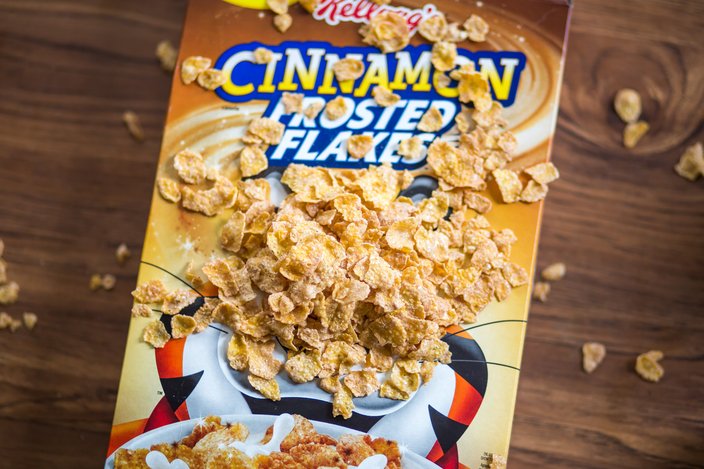 Without the giant heaping of frosted sugar on top, you can definitely taste more of the actual cornflakes than you do in a box of the original. Simply put, the cinnamon taste is not as substantial as the sugar frost is. For cinnamon fans, there is enough here to get that “spice” taste but perhaps not enough to keep you from coming back for more. However, this was from eating it dry.

After pouring in the milk, I let it sit for a few minutes to really test the company’s claims that the cinnamon wouldn’t wash off the flakes. Apparently, they tested more than 100 different recipes and cinnamon-application processes. The one that they settled on was to put the cinnamon in the flake coating itself instead of sprinkling it in on top.

It didn’t matter. The cinnamon is still pretty much completely washed away into the milk. Perhaps one day, science will unlock this puzzle, but we, unfortunately, have a ways to go. However, in a weird way, the milk with the washed-off cinnamon is the best-tasting part of the entire cereal. It’s like your own low-rent horchata.

Verdict: Doesn’t live up to its promises for cinnamon lovers and just isn’t as good as the original. Stick with C-3PO’s, Booty-O’s or Urkel-O’s.