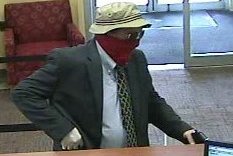 This suspect is wanted for the armed robbery of a Wells Fargo Bank in Dresher.

Wells Fargo Bank is offering a $20,000 reward for information leading to the arrest and conviction of the man who robbed one of its Montgomery County branches on Friday.

The Federal Bureau of Investigation and Upper Dublin police are seeking the public's assistance to identify and locate the subject wanted for the armed robbery of the branch at 1675 Limekiln Pike in Dresher.

The man entered the bank around 10:30 a.m. wielding a semi-automatic pistol in his left hand.

Threatening the tellers with his weapon, the suspect gave workers a green plastic bag, demanding they put money in it.

The suspect then fled the bank on foot with an undisclosed amount of cash. He was last seen heading southeast on Limekiln Pike.

The man is described as a white male between 50 and 60 years old, standing 5'11" with a medium to heavy build.

He was wearing a blue business suit and a blue button-down dress shirt with a patterned tie at the time of the incident. He was also wearing a light-colored "bucket" style hat, dark sunglasses, a red scarf over his nose and mouth, and white rubber gloves.

The suspect is considered armed and dangerous. Anyone with information is asked to call the FBI's Fort Washington office at 215-641-8910 or the Upper Dublin Police Department at 215-646-2101.