Block party at the Barnes Foundation to feature art exhibits, live performances and a beer garden

Barnes on the Block is celebrating Juneteenth and Father's Day on Sunday, June 19 from 4 to 9 p.m. 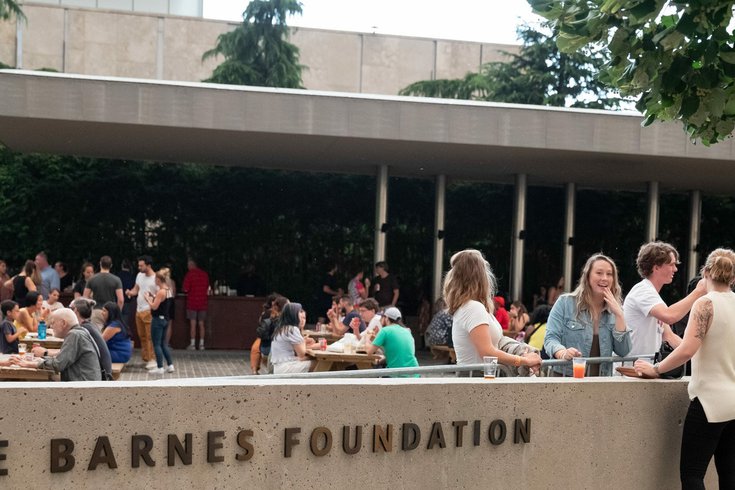 Courtesy of/Barnes on the Block

Barnes on the Block, the Barnes Foundation's annual free summer block party, returns this year on Sunday, June 19 from 4 to 9 p.m. The event is celebrating Juneteenth, Father's Day and the opening of the museum's summer exhibition.

Each year, the Barnes Foundation hosts a block party to welcome its summer art exhibitions and celebrate holidays. The event last year was part of Wawa Welcome America and took place during Fourth of July weekend.

Barnes on the Block is set to run on Sunday, June 19 from 4 to 9 p.m. This year's party coincides with Juneteenth, Father's Day and the opening of the museum's summer exhibition, "Isaac Julien: Once Again... (Statues Never Die)." The event features food, drinks, live entertainment and special programming.

Though the entire event is free, admission to galleries and exhibits requires prior registration, which officially opens at 10 a.m. on Thursday, June 16.

Outside of the Barnes' gallery, visitors can check out food trucks and a beer garden, with vendors including The Munchy Machine, Lil Pop Shop, Thai Jai Dee and Mary's Mobile Diner.

In addition to DJ sets from Oluwafemi, a variety of live performances are taking place. Performers include The West Powelton Steppers & Drum Squad, Musicopia, a hip hop and breaking performance from TAMEARTZ and a drum circle from Karen Smith.

We Embrace Fatherhood, a coalition of fathers from West Philly, artists and activists, are presenting a public art installation, called "From the Root to the Fruit: Portraits of Black Fathers and their Children." The instillation will appear on the facade of the Barnes Foundation at Benjamin Franklin Parkway and 20th Street from 8:30 to 11 p.m. The project, which celebrates Black fatherhood, is by photographer Ken McFarlane.

Visitors can try arts and crafts activities from 4 to 8 p.m., including planting and collaging at Tiny Farm Wagon with Misty Sol, decorating custom lanterns for Juneteenth with Ken Johnston, or making flower crowns with Marcellus & Marvin.

TAMEARTZ is going to be on site for the duration of the block party to teach guests about the history and foundations of hip hop and graffiti. Marshall James Kavanaugh and QuentinThePoet are writing personalized poems for visitors.

End the Exception, an activist group which advocates to change the exception clause within the 13th Amendment, is going to teach about the history surrounding the 13th Amendment. The clause, which stipulates that slavery and involuntary servitude is illegal except as punishment for a crime, is understood in activist circles as a legal loophole which allows incarcerated people to be forced to work for little to no pay.

Barnes on the Block