Beaten by a better team: Ten observations from Toronto 3, Union 0 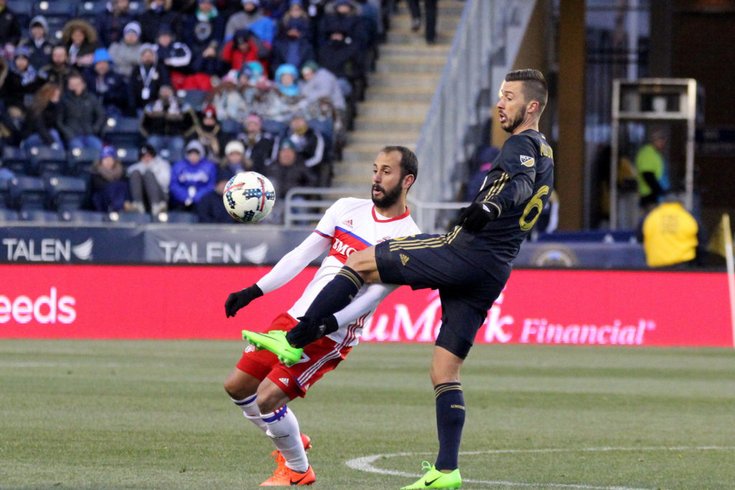 Victor Vazquez lead the way with two assists in Toronto's 3-0 win against the Union on Wednesday night.

The Philadelphia Union were not expected to beat the best team in Major League Soccer, Toronto FC, away from home and on short rest, especially after their commercial flight was cancelled the day before the game.

So it wasnt't surprising to see an all-time MLS side put three goals past a lesser club on Wednesday night.

That's about all I have for a lede, so let's get right to it.

Was the foul leading to the game-winning goal even a foul?

When you freeze the play, it looks like Oguchi Onyewu barely gets a piece of Sebastian Giovinco's toe. That's good enough for a whistle, especially when you're the Lebron James of MLS. 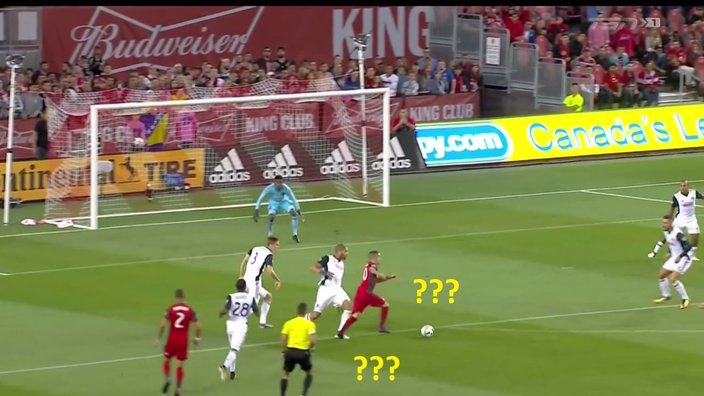 2. Don't get beat to that side

I'm not well-versed on goalkeeping technique, but the consensus is that you shouldn't get beat to your non-wall side on a free kick.

That's not to take anything away from Giovinco, who hit a beautiful curler into the top corner, but theoretically Andre Blake should have that covered, especially with an extended wall that includes six Union players and two Toronto players.

He may not have seen the ball at all, or maybe it just came in so quickly that he couldn't react. You can see him crouching in an effort to gain vision just before the shot is taken.

If the ball goes over the wall, that's something you can live with, but I thought Andre would have done better on this play.

Giovinco does it again as @TorontoFC takes the 1-0 lead. #TORvPHI https://t.co/N48YyQBSRx

Even in situations when the Union smartly read pressing cues, Toronto was excellent at passing out of danger.

This sequence is a great example of that, with the home side evading four opponents in the defensive third, then cycling the ball to the other end of the field and moving Philadelphia horizontally about 40 yards.

You wouldn't be able to tell that they were in a different formation, because they move so fluidly and understand how to build from the back with interchangeable parts.

In this picture, they're essentially dropping to a three-man backline to start their movement, with the left back pushed up in line with the two forwards. It's wonderful spacing and flexibility that incorporates their typical shape into a completely different look. 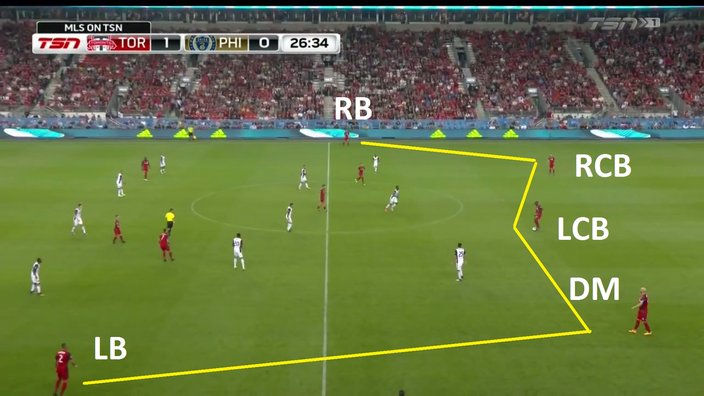 While I'm gushing over Toronto, I'll reiterate something I said on Twitter this week.

TFC's success is not just the result of spending millions of dollars on high-priced designated players.

This is how they built their roster:

That's basically every avenue of player-personnel acquisition that you can explore.

Philly, on the other hand, doesn't have much in category A, E, or F, with spotty results in the other areas.

Modern day MLS roster construction requires general managers to successfully take a ride down all of these avenues.

6. Give this guy some love

Victor Vazquez is my MLS Newcomer of the Year. This guy leads the league with 13 assists and has five game-winners in that category. It is, however, a bit of a double-edged sword here, since Toronto's star power overshadows his contributions.

On the other hand, he probably has those 13 assists because he's surrounded by superstar finishers like Giovinco and Altidore. How many assists would he have on a different team? 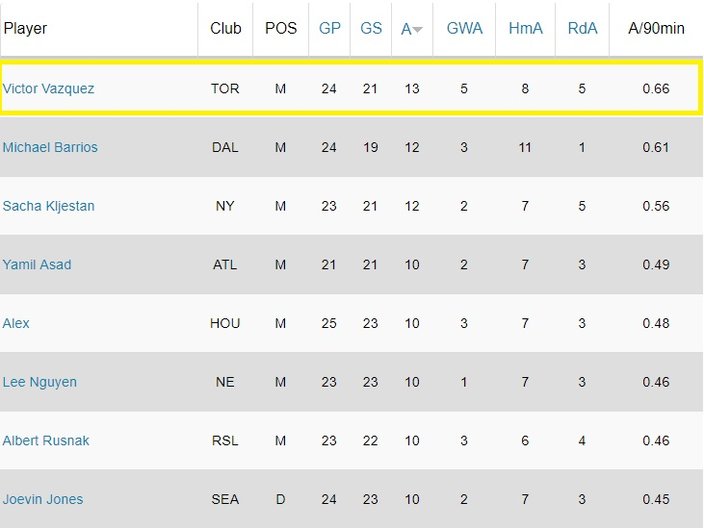 The obvious error is Marcus Epps giving way too much space to Nicolas Hasler, who loses the rookie in traffic. There are design flaws, too, with Ray Gaddis trying to vacate the far post and the Union leaving Altidore unmarked in a 5v4 mixer. 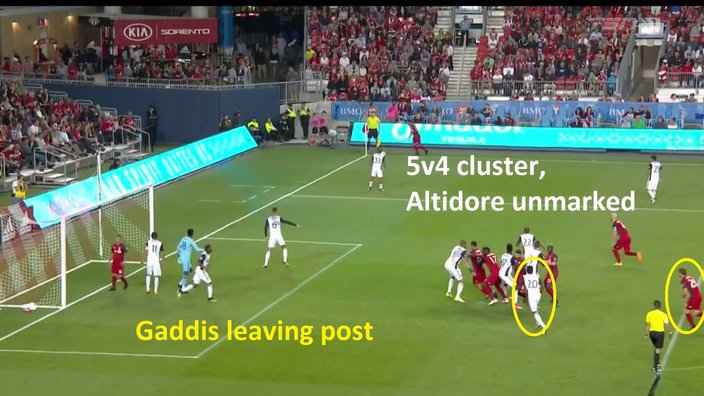 The Union didn't get a ton from their wingers, but Epps saw more of the ball and got into higher positions than Fafa Picault on the left.

Part of that, again, is probably due to the fact that Bedoya drifts to the right and pushes up further than Medunjanin, which creates that tilt I've talked about before.

Both wingers combined for three off-target shots. Epps had a 55th minute key pass while Picault did a bit more on the defensive end. Epps was 0/4 in dribble attempts while Picault finished 0/2. 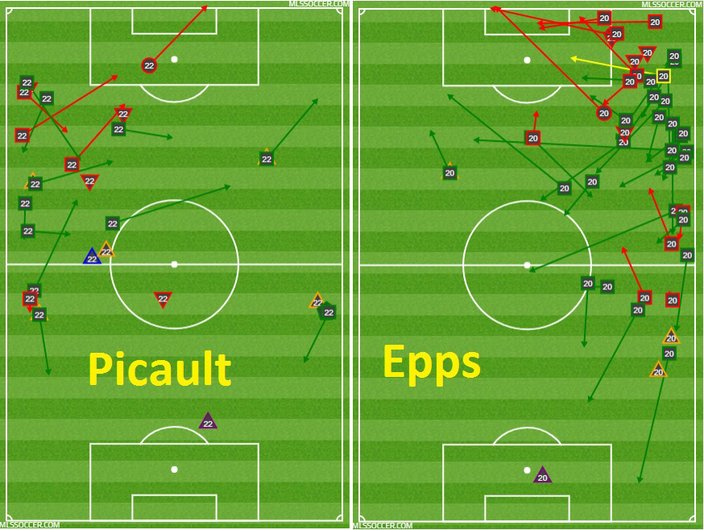 9. When the opportunity goes begging

One of those lost dribbles came at the tail-end of a promising counter attack, with Epps originally doing well to bomb forward after a Medunjanin skill-check and Ilsinho channel pass.

These are the moments of frustration, where you see the best and worst of a rookie in the same sequence.

10. The heatmap tells the tale

It was always expected that Toronto would win the possession and touches battle while playing at home against a weaker side.

Courtesy of WhoScored.com, we see that the touches are similar, too, with Toronto's front five receiving the ball 302 times. The Union front five had 195 touches, and you get a view how Jim Curtin's team trended to the right side of the field while TFC had a more balanced coverage area.