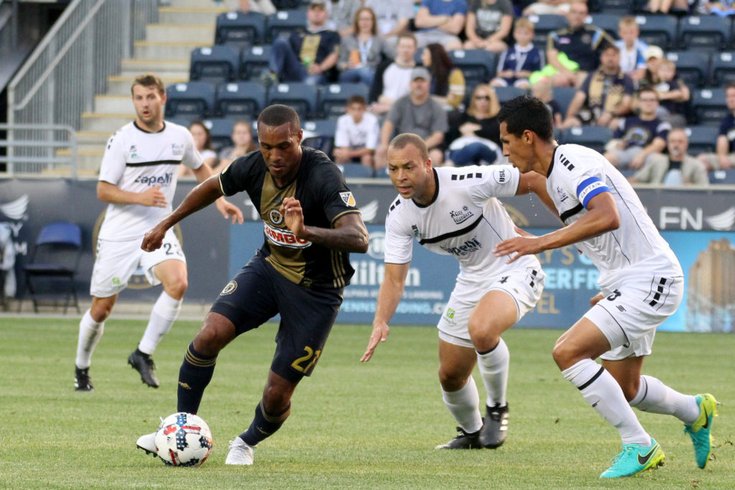 Last week's 3-0 home loss led us into one of the most boring Philadelphia Union weeks I've ever experienced.

With playoff hopes on life support, and a 10:30pm Saturday night road game up next, there's just been very little buzz around this team as we head down the home stretch.

So instead of struggling for something interesting to write, let's turn it over to the fans for a Friday mailbag.

Will the team make any of the changes that we've hope for in the offseason?(DP #10, jettisoning expiring contracts)

Sure. I think Roland Alberg, Ilsinho, Maurice Edu, and Charlie Davies are moving on. Brian Carroll will probably come off the books. Chris Pontius is an interesting decision, as is Ken Tribbett.

Going out and spending seven figures on a DP number ten would go a long way towards making this team competitive. The only seven-figure player in club history is Alejandro Bedoya, so the benchmark for spending is a $1,100,000 utility midfielder who does a lot of good things, but doesn't change the game like a typical million-dollar earner.

They need to match and/or eclipse that benchmark.

Play GM into season end - who stays, who goes, who is protected in LAFC expansion draft.

Are they even having an expansion draft for LAFC? There were a couple of reports out there claiming that it might not even happen.

Under ANY circumstances, can @thesoccerdon advocate/dictate ownership change(s) to @PhilaUnion w/ intent to improve the franchise in @MLS

What he can do is apply pressure to Jay Sugarman after expansion concludes.

That's the issue here, because Sugarman sits on the five-man MLS expansion committee and has seen his initial investment of ~$25 million increase to something like $150 million in just eight years. All he has to do is wait it out, let expansion add to the value of his franchise, then cash in when that plateaus.

I think you'll see a real push to move on some lackluster owners, but only when we get to 28 teams, or whatever the final number is.

@Kevin_Kinkead @DaveZeitlin with MLS expansion on the ⬆️ & a skinflint owner, is the U in line to be sold & relocated?

Sold eventually, but they won't move. They still have 22 years left on a 30 year stadium lease. Legally, I don't know what kind of process you'd go through to get out of that.

And I'd hope that the Philadelphia Union fan base doesn't allow that to happen anyway, considering what the Sons of Ben did to get a team here in the first place.

Would pro / rel most likely result in a) Newcastle style yo-yo-ing, b) team being sold once relegated or c) team folding once relegated?

Probably B, since team value would decrease without any guarantee of shooting back up. Sugarman would be smart to cash out since he'd start losing more money right away.

Seeing that the Union attendance has gone down, do you think a signing would've helped that a little?

Not unless it was Lionel Messi.

I think most people have checked out on this season. Their kids are going back to school and a lot of people are using these final summer weekends to hit the shore or do other things. I may or may not be drunk by the time the Union play San Jose on Saturday night.

A signing may have helped season ticket renewals for next season, but I don't think there would be an immediate attendance spike with only four home games remaining.

Plus, I think those two October games take place at the same time as Eagles games.

Is losing all these Academy players part of the plan to build through the Academy? (Letts/Young/Steffen) probably missing others

It is what it is at this point.

This is a labor law/league roster/U.S. Soccer conundrum that brings a lot of different things into consideration.

Matt Ralph over at Brotherly Game wrote up the Chad Letts story.

I'm a founding father. Why should I redoop for 2018? @PhilaUnion

I don't have an answer for that.

Ideally, Earnie Stewart would move on from some of these bust signings and bad contracts, bring in an exciting number ten, and start handing out minutes to guys like Anthony Fontana and Auston Trusty, which is what they've claimed they want to do for awhile now.

Also, more pressure would be on Sugarman to spend and Jim Curtin to win, so the margins for error, and concurrent potential for new hirings and firings, would be higher next season.

Do you honestly see them learning from mistakes and building a better roster next year.

I think Stewart understands now that these $500,000 contracts are risky business.

There were too many Simpson/Alberg/Ilsinho type of signings, where they ate up a big chunk of change without providing enough impact. Even Chris Pontius is in that range ($400,000) this season.

Who runs the attack next year

I guess it's Sapong, since they are already stuck with $800,000 in the center forward position. The only other option is to move Simpson and try to find an upgrade. There's not a lot of wiggle room unless they change the shape, which won't happen.

Is there any way for the Union to unburden themselves with Simpson's contract to free up even more $? Can they simply drop him to waivers?

He has one more year on his contract, so unless there's a mutual termination, I don't see anything happening there.

Does Ray Gaddis have nude pictures of Jim Curtain?

No, but he's a better defender than Rosenberry, at least in 2017. And Curtin is a defensive-minded coach, so there you go.

That's not to say that I think he should be starting, but that's the explanation for why he is.

Will edu ever play for the union again

Maybe once or twice in October, but I don't see the point.

Even if he's healthy, I'd rather see Derrick Jones get those midfield minutes, because he's the future and Edu is not.

Can the union be successful under Curtain or is it time to move on next season?

They can be, but I just don't think you can justify keeping him around if you start out poorly in 2018.

What's it take to oust Curtin? Will winless for rest of season do it? It's very possible with their end of season schedule.

I think that depends on player performance and body language. If the team quits on him, then it's time.

Zero percent. This is the same regime that traded him last year, and he wasn't happy about it.

With the changes in Colorado, what are the chances of Conor Casey joining our coaching staff? And will he continue bizarre red-cards?

Close to zero percent, but let's hope the red cards continue wherever he ends up.

How many young Union player's careers were ruined by John Hackworth? Not necessarily starters but bench guys also

Well, Hackworth probably saved the careers of Jack McInerney and Amobi Okugo, who were sitting on Peter Nowak's bench.

Problem with Okugo is that Hack moved him to center back, since the roster was a mess and they needed someone there. He also put Aaron Wheeler in defense and kept Gaddis at left back, but, again, it wasn't really by choice, he just had limited resources and a limited roster to work with.

It was Curtin who moved past Okugo and Zac MacMath, and McInerney was traded for off-field issues. Both Hack and Curtin got it wrong with Roger Torres, so that's probably the biggest grievance here.

Why is the Union?

Good question, I wish I knew the answer.

Is the time right for Freddy Adu to return at CAM?Is "going Dutch" a dog whistle for selfish PK takers?

I feel for Freddy at this point. We, the media, definitely played a part in ruining his career.

.R the @PhilaUnion planning on disbanding the "SOB" & anything "union" or "Ben Franklin" 4 his assoc. w/ racists & his own racist behavior?

It's true that Ben Franklin did own slaves before having a change of heart on the issue later in life.

William Penn, who has a statue on top of City Hall, also owned slaves.

It's an interesting part of the discourse surrounding the Charlottesville issue. The compromise, I think, would be to put those statues into museums, which allows for the preservation of American history while also taking other people's feelings into account.