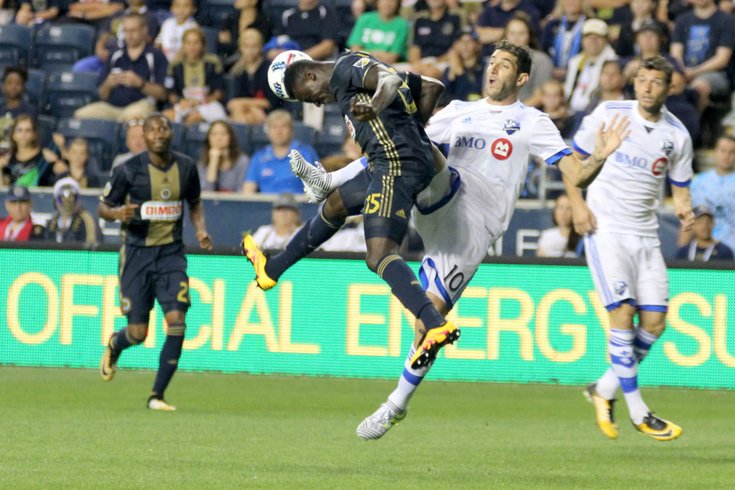 A week after putting in one of the season's best performances, the Philadelphia Union threw away three points on their home field.

Whatever momentum was picked up from a stellar win against FC Dallas was essentially flushed down the toilet Saturday night with a 3-0 loss to Eastern Conference strugglers Montreal.

It wasn't as lopsided as the scoreline indicates, with the Union hitting the post at nil-nil before conceding the eventual game-winner about 25 minutes from full time. The visitors scored twice in stoppage time to make the loss look worse on paper.

The entire Union community did a wonderful job celebrating the life of late Sons of Ben President Kenny Hanson.

During warmups, the team donned black t-shirts featuring Kenny's initials and the SOB logo. A pair of matching armbands were worn throughout the game by captain Alejandro Bedoya and head coach Jim Curtin.

A moment of silence was taken before first kick, with a River End tifo unfurling to the sounds of the Grateful Dead, which was Hanson's favorite musical act.

2. Ray Gaddis did a nice job on Nacho Piatti...

People generally slag Gaddis because he doesn't have much of an offensive game.

The flipside is that he's one of the best 1v1 defenders this team has ever had, and I thought he played a really nice game against Ignacio Piatti on Saturday night.

Prior to that he had two key passes that took place more than 40 yards from goal. He finished 5/5 in successful dribbles in Montreal's half of the field but went 0/4 in dribbles in the Union half, which is mostly due to the fact that the combination of Gaddis and Chris Pontius was forcing him to turn his back in areas that weren't even close to the final third.

Here's Piatti's chart, which shows a chunk of activity down the left that doesn't feature much penetration: 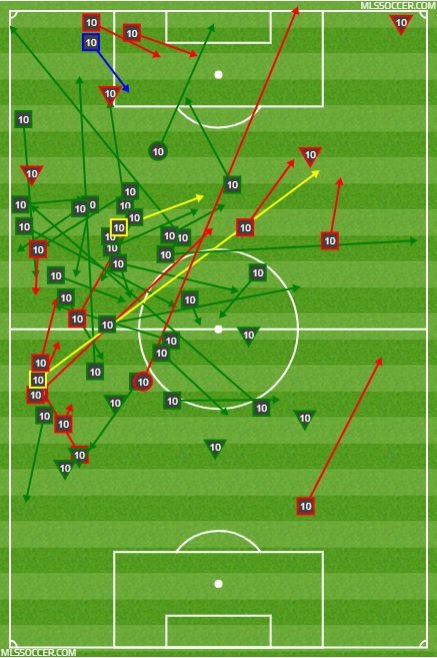 There was a sequence in the second half where the Union nicely played through a rare bit of Montreal pressing, which freed up space on the right for a counter movement.

It ended with Gaddis putting in a really nice cross, which happened to be his only attempt of the game.

It does make you wonder why we don't see more of it, because he's shown that he can actually hit that service when necessary, he's just hesitant to do it for some reason.

With Josh Yaro in the starting eleven, Jack Elliott shifted over to left center back from his typical right-sided spot.

As a result, I don't think he was as crisp with his passing game, which is natural when you make that switch from RCB to LCB, especially as a right-footed player.

I asked Curtin about that after the game -

"For sure, you know, the angles are different. He's not as comfortable on his left foot, you can see the tendency to come back on the right, it's something we asked him to do tonight and he's a professional. He did a solid job, but yea, the passing angles for sure are different when you shift to that side, especially for a right footed player. The thinking there is Josh is one who has pretty much always played on the right hand side. Jack has done it in college and even with us now a couple times, but I think it is more natural for him to play on the right side."

It's not much, and it shouldn't indicate a ton at the end of the day, but the takeaway from that, combined with the eye test, is that Montreal is a little more deliberate with the ball.

"We played not as a team especially in the second half. We gave them too much space and they're a good tactical team. They have a lot of experienced guys, they know when to hold the ball and when to attack and that's what we missed."

You saw a lot of that in the first half, when the Impact would knock around some short passes between Laurent Ciman, Victor Cabrera, and Samuel Piette before looking for that long diagonal or line-splitting pass. They were content to sit on the ball for a bit before picking their spot to move forward, which can look lethargic in real time, but it's really an exhibition in patience.

On the game-winner, it looks like nothing at all is happening, with Piette recovering a bad pass and moving the ball to the center backs. Ciman looks up, fires one successful diagonal, and the Union can't recover quickly enough to beat the cross into the box.

6. Samuel Piette had a great debut for the Impact

He didn't look like a MLS newcomer in this game, doing solid work in the defensive midfield and playing a smart and simple game. In addition to winning a couple of crunching tackles, he missed just five passes, finishing 53/58 in that category.

Piette picked up a second-half yellow and conceded three fouls on the night, but also finished 6/7 in tackle attempts while adding two blocks, two clearances, and ten recoveries. 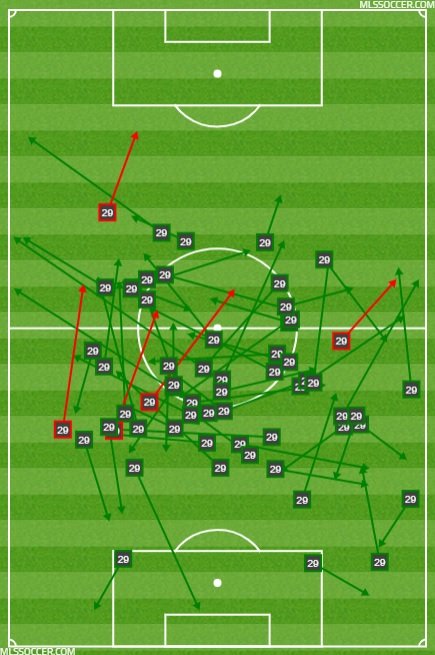 8. Someone said something to Giliano Wijnaldum at half time

For whatever reason, Wijnaldum didn't look dialed-in during the first half of this game. There were a couple of lazy sequences up the left flank, with some half-hearted passing and tackle attempts.

It looked like the MLS equivalent of taking a few plays off.

In the second half, he was so much better, winning a couple of 1v1 footraces in recovery and knocking a shot off the post during a scramble in the box.

He's still not doing much going forward, however, and finished with one cross attempt in this game,  the same as Gaddis on the other side of the field.

9. The Union are still heavily right-sided

In the clip leading to the Gaddis crossing attempt, you see that Bedoya comes back to a deep central position to help evade a Montreal press. In springing Gaddis down the flank, Bedoya's vacation of that space is what creates the play in the first place.

For the rest of the game, he's basically hovering exclusively around the right side of the field, which we've determined is a natural thing due his days as a winger, his stronger right foot, and Medunjanin's preferred left foot.

It creates an imbalance going forward, which I think is probably why the wingers haven't been too effective this season.

The Union are six points out of the playoffs with ten games left.

Problem is, Atlanta and Montreal have two games in hand.

The other issue is that Philly now plays four of the next five on the road, with a trip to San Jose this Saturday followed by a short-rest jaunt to Toronto.

I don't know where the points are coming from, especially for a team that's 1-7-3 outside of Talen Energy Stadium this season.

On paper, it looks like Philly is pretty much cooked.