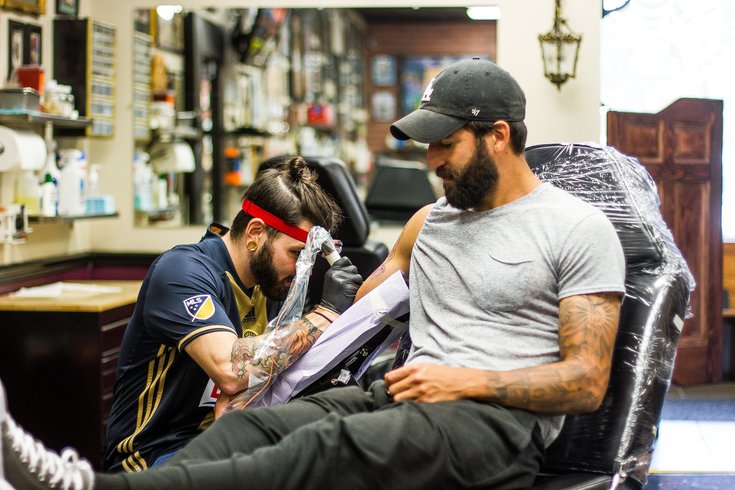 Union center back Richie Marquez was one of three people to take part in Monday's inaugural tattooing event at Bonedaddys in Aston, Delaware County.

A lot of people rolled their eyes when the Philadelphia Union named their first-ever "Chief Tattoo Officer" on the same day that the summer transfer window closed.

Union fans hoping for a seven-figure midfielder were instead presented with the culmination of a feel-good feature story.

But here's the thing; people would have bitched about the "CTO" no matter when it was announced.

It's a lose-lose for the Union's marketing department because when your team is a perennial loser, you're always walking on eggshells.

So while the timing of the tattoo announcement wasn't great, the backlash is overblown, because we're judging a marketing campaign relative to the team's lack of on-field success.

The @PhilaUnion finally name their Chief Tattoo Officer (your read that right). Now about those 8 wins...

What would you have the marketing department do? Sit on their butts? Milk the Jack Elliott "Rookie of the Year" story? Collect a paycheck while taking three-hour lunch breaks because the team isn't good?

The whole point of marketing is to promote the product and create exposure for the brand, and that's what Vice President Doug Vosik and his team did with this initiative.

News about the Chief Tattoo Officer made it to London newspapers, Canadian websites, and national American outlets. That's brand exposure right there, and if one kid in Manchester Googles "Philadelphia Union," then you've successfully reached someone in a completely different market.

Speaking of markets, people in this one actually gave the Union some attention for once.

NBC 10, CBS 3, and Action News, which is the worst broadcast partner in the world, did stories about the tattoo officer. I read about it in the Philadelphia Business Journal and on competing websites like Billy Penn and Phillymag.com. I'm not sure if those six outlets have done anything else Union-related this season.

And it's not like front office executives were naive to the idea that people might find the whole thing corny. This is what Vosik said about the "gimmick" outcry when we spoke back in February:

"At the end of the day, I go back to the heart of this, which is to provide a great service to our players. We provide a lot of great services to our players, and here's one more to allow them to have a great experience with the Philadelphia Union and improve their off-field lives. If we take care of our guys, then it helps them focus more on the task at hand.

So, whatever 'negadelphia' comments that are out there, and the jokes that are out there, we're providing a great service to our players, and something that can be fun for the fans. Our guys will always put in their hard work and do the best they can every single day in practice and in every single match. If we can make their lives a bit better by providing a new service for them, why not?"

Seems reasonable to me. God forbid we do something fun for the fans!

That was the whole point of Monday's inaugural event at Bonedaddys Tattoo in Aston. Vosik himself got some new ink (he has a lot, to begin with), alongside Sons of Ben co-founder Corey Furlan and Union defender Richie Marquez. It was harmless, fun, and something different, so credit to the club for thinking outside the box.

It's not the job of the Union marketing department to prepare the team for matches, or figure out the best formation to play, or develop academy talent or scout for Argentinian playmakers. There are people in those roles who need to "do a better job," as Andy Reid would say.

But I get it, it's about optics. It's always about optics with this franchise, and they aren't great in that department. Last week they promoted an article ranking Jim Curtin among the best young American coaches, just a few days after a 3-0 home loss. That probably wasn't the best idea.

Truthfully, it's a catch-22 for Keystone Sports and Entertainment employees, because the optics are always going to be negative when your team is struggling. There's never a good time to throw up a feature story or a marketing campaign when the franchise has had one winning season in eight years of existence.

I would know since I wrote for PhiladelphiaUnion.com from 2010 to 2014. When the team was exciting back in 2011, people gobbled up everything we published. And when the team was atrocious in 2012, we had to edit word-by-word, since any misstep could be misconstrued as schlepping propaganda for the official team website.

How do you feel about the Union looking to hire a Chief Tattoo Officer? https://t.co/b7cEkLutli

The only real issue I have with this topic is that the CTO selection process probably dragged on a bit too long.

When the initiative began in the winter, the reaction was strong and widespread. But when it took six months to find an artist, it resulted in diminishing returns with a glut of press releases that missed the mark.

Still, this campaign probably had more reach than any other Union marketing initiative in franchise history.

So while it's easy to rip the tattoo thing as a cheesy publicity stunt, that's not fair, since front office people still have a job to do, no matter how poor the unrelated on-field product happens to be.

In this case, they did their job well.