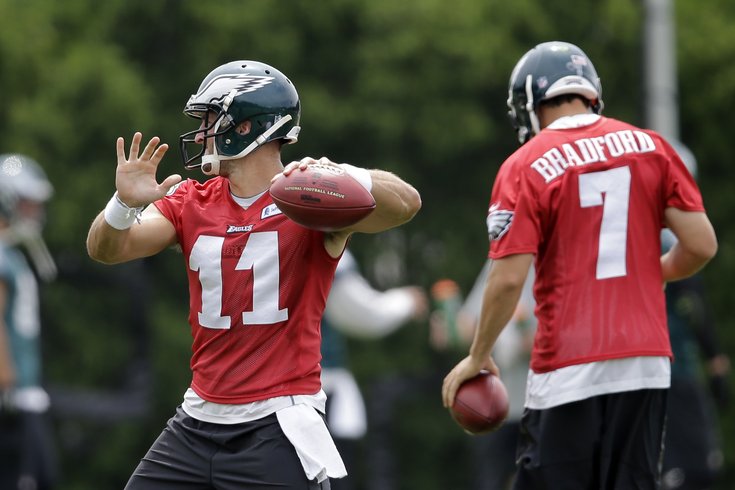 Over the last few weeks, chatter among some people who are plugged in with the team believe that the Eagles didn't just sign Tim Tebow because he's a nice guy, or a "camp arm." Their sentiment is that the Eagles not only intend to keep him, but they intend to use him.

The perception that Chip Kelly absolutely must have a "running quarterback" has been busted to some degree, when you consider the quarterbacks he has brought in since he's been the head coach. Sam Bradford, Mark Sanchez, and Matt Barkley, to name a few, won't be confused for Randall Cunningham anytime soon.

However, Kelly has shown in the past that he will use a "running quarterback" in certain spots. Think back to 2013, for example. The Eagles were in the middle of a five play, 70 yard drive, and had entered the Cardinals' red zone. This was at a time when Nick Foles was not only on fire just in general as a quarterback, but he was producing scores in the red zone. For some reason, Kelly sent former accomplished college QB Brad Smith in to run the Wildcat on first and goal from the 6 yard line, with Foles lined up as a wide receiver. This was the result, in case you don't remember:

It might also be worthwhile pointing out the Eagles-49ers game a year ago. With the Eagles down 5 and the ball at the Niners' 1 yard line with under 2 minutes to go, the Eagles opted to throw on 3rd down, and then again on 4th down, before turning the ball over on downs. That was a game where the Eagles' makeshift offensive line had been dominated all day, but a 6'3 245 pound bulldozer of a quarterback might have been able to get that yard on the ground on a QB sneak instead of a far weaker runner like Nick Foles.

Of course, Tebow will have to beat out incumbent third-string quarterback Matt Barkley. A strong argument against Barkley is that the Eagles have been willing to trade him for well over a year now, and according to a source, they're not exactly looking for much.

The argument for Barkley is that he is a more "traditional" quarterback. With two quarterbacks with histories of serious injuries ahead of him on the depth chart, there is logic that says Barkley is more likely than other third stringers to see game action, like he did in 2013. While Tebow is a more versatile player who could potentially be used in certain game situations, there's an argument to be made that Barkley would be a better option if he had to play, say, two or three quarters of football.

Then again, once you get down to your third-string quarterback, you're kinda screwed anyway.