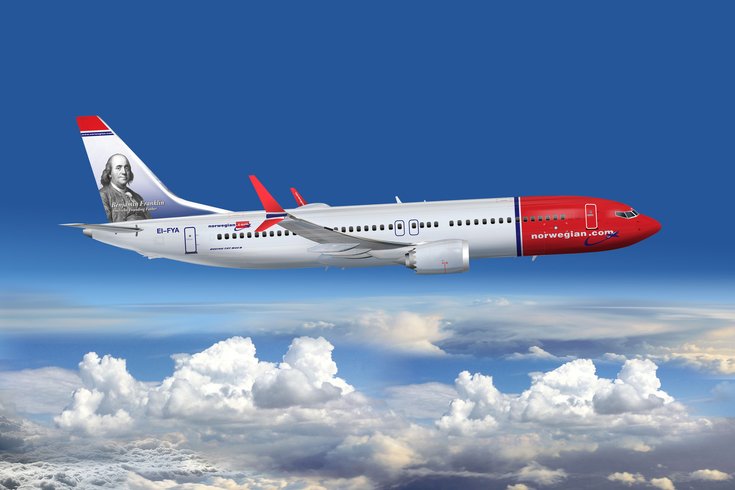 Norwegian airlines will feature Benjamin Franklin on the tailfin of its new models.

For years Norwegian Airlines has adorned its plane with portraits of “tailfin heroes,” usually of the Nordic persuasion, who fly high on the plane's exterior and selected as an honor to their accomplishments as an innovator.

Past tailfin heroes have included Hans Christian Anderson and playwright Henrik Ibsen, but for the first time ever Norwegian Airlines will feature an American historical figure on its tailfins, looking no further than Philadelphia’s most imminent founding father and kite flyer in the form of Benjamin Franklin.

He will appear on the airline’s Boeing 737 MAX 8 aircraft, making its first voyage from Seattle to Oslo, Norway, and shortly between Europe and the United States after that.

The airline will introduce more American icons in the months to come.

“Since its founding, Norwegian has a time-honored tradition of celebrating iconic, historical figures on the tails of its aircraft,” Norwegian airlines said in a statement. “Each person who is featured on a tailfin embodies Norwegian’s spirit of pushing boundaries, inspiring others and challenging the status quo.”

The celebration of American icons comes as Norwegian airlines expand its options for travel to the United States. Norwegian now offers 63 routes from the U.S., and there are 57 transatlantic routes from 15 U.S. airports to Denmark, France, Ireland, Norway, Spain, Sweden, and the United Kingdom, as well as six routes to the French Caribbean.

“We are proud to decorate our newest Boeing 737 Max 8 aircraft with Benjamin Franklin. Not only is he an American icon, but he was also a truly fresh air thinker and a pioneer for so many reasons,” said Thomas Ramdahl, chief commercial officer of Norwegian airlines, in a statement.

“It is an honor to recognize an American founder on one of our aircraft, and this gesture also symbolizes all of the great things we have planned for Norwegian in the United States.”