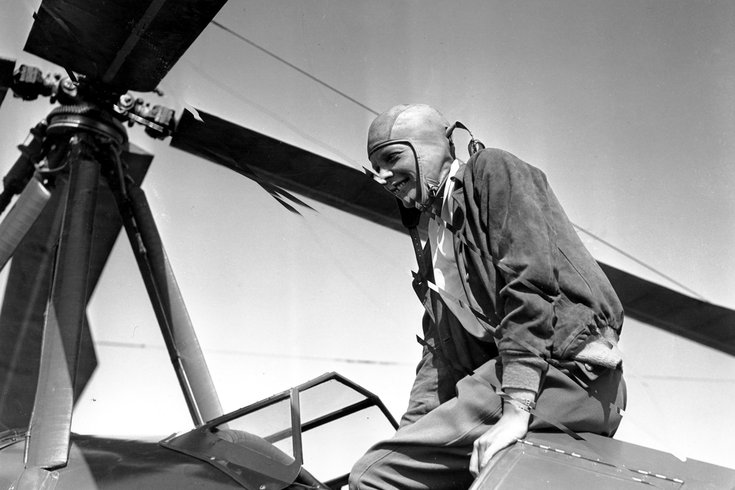 To commemorate the 80th anniversary of Amelia Earhart’s disappearance, the History Channel made headlines Wednesday after digging deep into the National Archives to find a photo that may depict Earhart and her navigator, Fred Noonan, alive as prisoners of the Japanese military in the Marshall Islands.

There’s already a flurry of debate over the validity of the photo, and the History Channel plans to air an Amelia Earhart special Sunday that will further explore the possibilities of what happened to the aviator.

Whether the picture actually depicts Earhart or proves her survival is unclear, but dozens of theories have been thrown into the Earhart mystery over the past eight decades. One of the most unusual, perhaps, was author Joe Klaas’ claims that Earhart survived and was living quietly as a housewife named Irene Bolam in Monroe Township, New Jersey.

The book, titled "Amelia Earhart Lives: A Trip Through Intrigue to Find America’s First Lady of Mystery," was written in the 1970s and hypothesizes that Earhart may have returned to the U.S. after World War II. According to the book, Bolam resembled Earhart and was mistaken for her at a party on Long Island. Klaas wrote that Bolam was also a pilot.

Once the book was published, Bolam sued publisher McGraw-Hill. It was later pulled from shelves.

Klaas, who wrote nine books in his lifetime, gained notoriety for perpetuating the Earhart housewife rumor. He was a close friend to Joe Gervais, who conducted well-known Earhart investigations in 1960 in Guam and Saipan but was also responsible for originating the housewife theory before sharing it with Klaas.

Regardless of Bolam’s displeasure with the publishing of the book, it has gone on to be quite a treasure in the Earhart-obsessed community as one of the most extensive books about the mystery of her disappearance.

Evidence about Earhart grounded a bit more in reality comes from skeletal remains found on the island of Nikumaroro. Richard Gillespie, founder and executive director of The International Group for Historic Aircraft Recovery, said part of a woman’s shoe and a navigational sexton were found there.

“We’ve examined it archaeologically and we are finding artifacts that speak to an American woman in the 1930s,” Gillespie told USA Today. “We are trying to find any surviving human remains to get DNA.”