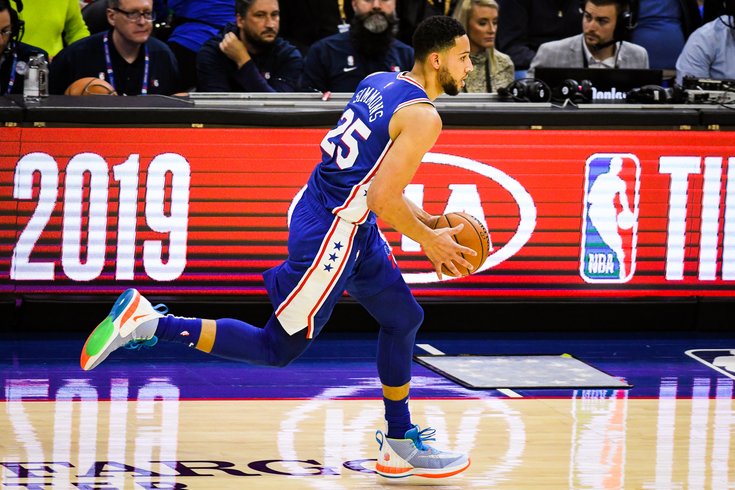 Ben Simmons has been ruled questionable for Tuesday's Sixers game against the Cleveland Cavaliers, but there is internal optimism that he could be upgraded following an evaluation from the team on Tuesday morning, PhillyVoice was told early Monday evening.

The Sixers will err on the side of caution with one of their best players if they have to, and Simmons has missed the last two games (plus the second half of the team's loss to Utah) due to a sprain in the AC joint of his right shoulder suffered while posting up Jazz wing Royce O'Neale. But getting Simmons back would obviously give the Sixers a nice lift on both ends of the floor, and with the backup guard situation suddenly looking much rosier in Philadelphia, the Sixers may find themselves with capable guard play for 48 minutes, a rarity for the franchise in recent years.

They will need that boost to the rotation, as the Sixers have plans to buy more rest time for other members of the starting lineup this week. Al Horford will get his first scheduled rest day of the season on Tuesday night against Cleveland, the first half of a home-road back-to-back that will take them to Orlando on Wednesday night.

Joel Embiid has been the guy at the center of most "load management" conversations in Philadelphia, but with Horford putting some extra miles on his legs at power forward this season, making sure they don't burn him out in their effort to protect Embiid is a critical part of the long-term plan.

While the Sixers would not comment on their formal plans for the Magic game on Wednesday, it stands to reason Joel Embiid may get a rest game on Wednesday on the second half of a back-to-back. The team has kept his minutes count low and he has had a few unplanned absences already this season, so this could ultimately hinge on how Tuesday night's game vs. Cleveland unfolds.

(An additional note: Philadelphia's two-way big man, Norvel Pelle, will also be with the team on Tuesday in connection to Horford's scheduled absence.)

In other injury news, Sixers guard Shake Milton has been ruled doubtful for Tuesday's game against the Cavaliers, but a team official told PhillyVoice they expect him to be available to return in the coming days, and his status will be subject to his own evaluation on Tuesday morning.