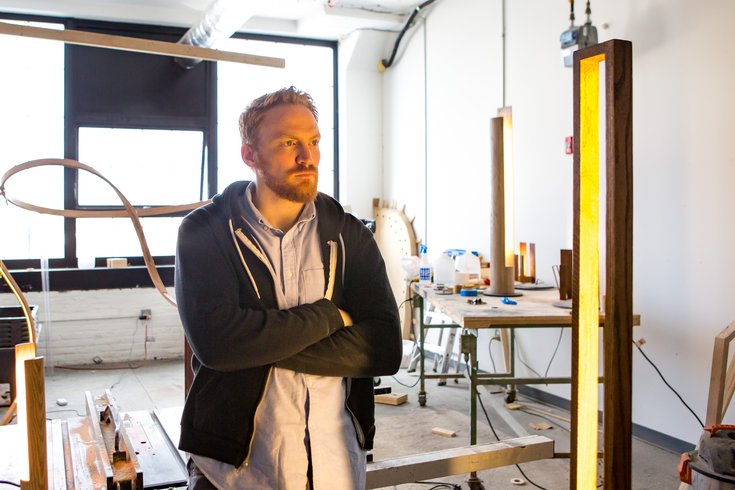 Ben Gillespie, lighting designer and owner of Ovuud, in his workshop at Maken Studios in the Harrowgate neighborhood of Philadelphia.

Benjamin Gillespie, a Philadelphia native who works full-time as a patent attorney in Rittenhouse, was picked from nearly 1,000 applicants across the United States to be one of 195 artists featured in November's Philadelphia Museum of Art Craft Show.

With his office job, he's had to hone his craft of creating custom lighting designs using wood in his free time, which means sometimes starting his day at 3 a.m.

Gillespie, who resides in Port Richmond, went to Drexel University for engineering and is a Temple University Beasley School of Law alumnus. As far as furniture building and design goes, however, he has no formal training.

"I've been building furniture since I was a teenager," he said. "My father is incredibly handy and he always had tools around the house. Teaching yourself, you just kind of get better at it."

Between 2013 and 2014, Gillespie started to become more focused on setting up a shop for his craftwork. He currently owns and operates Ovuud, where he designs and fabricates each piece himself.

We wanted to find out how Gillespie manages to be both a hard-working attorney and a master craftsman, so we chatted with him and checked out some of the pieces he's working on in his shop in Kensington. 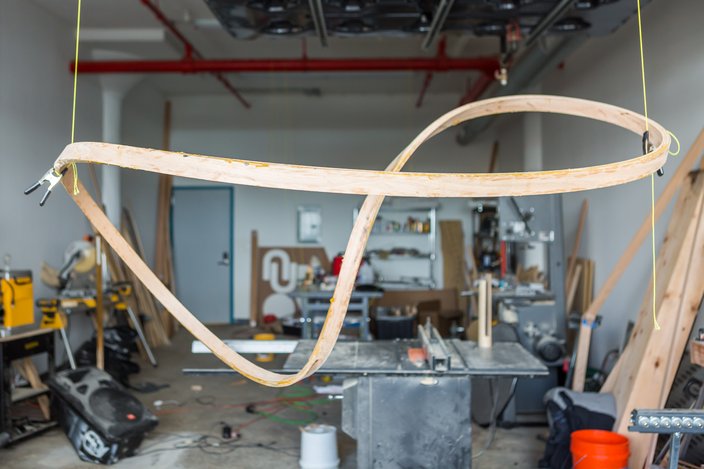 The latest project at Ovuud is a hanging lamp that Gillespie is currently constructing.

PV: How do you find the time to work as an attorney and create these lighting and furniture pieces?

It's a challenge to be honest. I actually love doing this side endeavor, so I make myself find the time.

I've had to make sacrifices. I don't work out as much as I used to. The social life has taken a little bit of a hit. Usually when the weekend would come, I would make an effort to go out and have fun. Now, I try to get to bed early so I can wake up as early as I can on Saturdays and spend 12 to 14 hours in the shop.

I try to make my time as efficient as possible. The way I approach my daily schedule is centered around getting into the shop.

PV: It would be great if you could take us through a typical day.

I schedule my days one of two ways. I usually wake up around 6:30 a.m., have breakfast, maybe go for a run. Then I take the El down to Center City, and I go to my office in Rittenhouse. I put in a solid nine hours of work, go home, eat a quick dinner and then I shoot over to the shop.

Occasionally, I'll have (custom lighting) projects where I'll leave in the middle of the day for a couple hours. I'm working on a project with a hotel developer – they're opening a hotel in Fishtown – to do some lighting install. Everyone else has a normal schedule, so sometimes I have to leave the office at 11 a.m. for an hour or two, then come back to Rittenhouse.

The other way that I do it, is sometimes I wake up super early, at like 3 in the morning. I go to my shop, and I work from maybe 3:30 to 8 a.m. Then I'll come home, shower and go to work in Rittenhouse. In my shop I have big windows, and it kind of pumps me up to see the sun come up ... but it's a wacky schedule.

PV: What is the style of your designs?

I would say it's Scandinavian-inspired. The aesthetic I go for is really minimalist. Nothing too crazy. I've made actual chairs, tables, but what I focus on is lighting.

I think one of the reasons I gravitated towards that is I've started making LED-based lighting. There's the traditional incandescent bulb – that's the bulb you screw into the socket – but there's new technology out now. 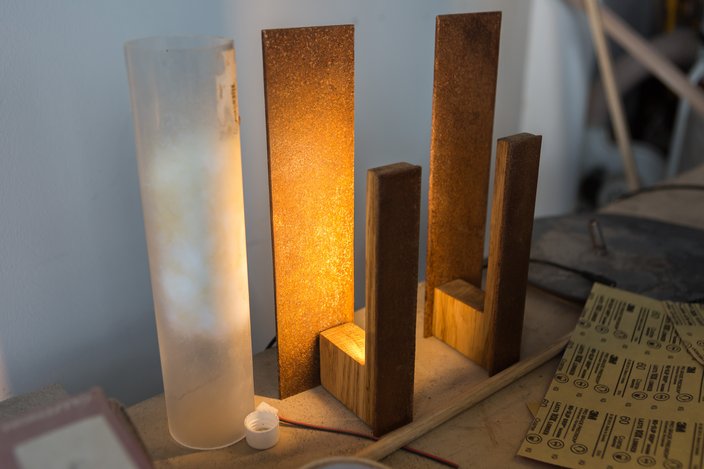 PV: Are you liking the balance of working a 9 to 5 and having a creative outlet? What's next?

One of the reasons I'm willing to put this ridiculous schedule into place is that it's temporary. I've been investing a lot of money and time into growing (Ovuud) and I think it's working. I think I'm on the right trajectory. I'm not necessarily in a rush to do it full-time tomorrow, but ultimately I would like to make this a self-sustaining business.

The Philadelphia Museum of Art Craft Show will take place Nov. 2-4 at the Pennsylvania Convention Center on Arch Street. Tickets can be purchased online, or at the show. The price is $20 for one day and $25 for two days.