A widely-shared video of the incident shows people throwing chairs, but does not include the start of the conflict 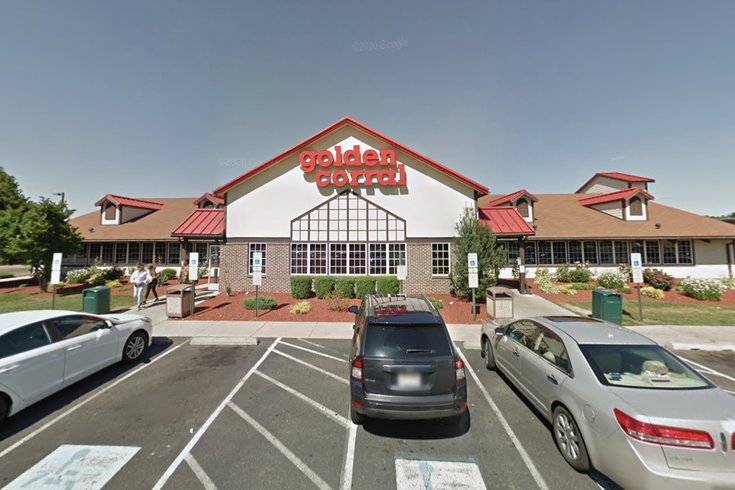 A disturbing video of a brawl inside the Golden Corral restaurant on Street Road in Bensalem, Bucks County, is being reviewed by police. No arrests have been made in the altercation.

Authorities in Bensalem have confirmed they are investigating a chaotic melee that unfolded Friday afternoon at the Golden Corral Buffet & Grill. A video of the brawl showed chairs flying across the dining room after an apparent altercation escalated.

The video, which was shared widely Sunday on Facebook, captured nearly four minutes of pandemonium inside the business. It's not clear from the video what led to the fight, but Golden Corral employees can be seen intervening to stop people from throwing chairs and tables as patrons flee for safety. (Note: This video contains explicit language and violence).

Golden Corral 1465 Street Road Bensalem Reposting cause this never shoulda been taken down. I say tear it down and put up something new. This place just charges people to eat roadkill off the turnpike.

Bensalem Director of Public Safety William McVey told the Bucks County Courier Times that the incident happened around 4:30 p.m. It was not known exactly how many people were involved in the fight, but investigators believe it was more than 40.

Police said the Golden Corral dining room was heavily damaged in the incident.

One customer who was at the restaurant at the time of the incident told 6ABC that the fight stemmed from an argument over steak.

Golden Corral has more than 400 locations in 43 states, a large number of them franchises.

"We are aware of an unfortunate disturbance that started between two parties of guests at our franchise restaurant in Bensalem," said an emailed statement from franchisee JK Hospitality, LLC. "We notified the local authorities, and they are investigating the incident. Thankfully, no serious injuries have been reported. The safety of our guests and co-workers is our top priority."

No arrests have been made at this time and police are reviewing the video of the incident as part of an ongoing investigation.