Under pressure from animal rights groups, Kenya Airways says it will no longer transport wild animals 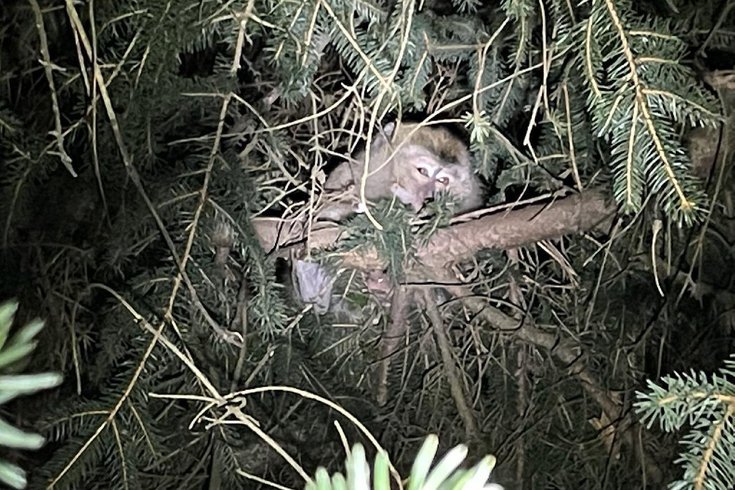 Several long-tailed macaque monkeys escaped from a truck that crashed last week in Danville, Pennsylvania. The animal pictured above was among three that were euthanized. Kenya Airways, which transported the monkeys to the U.S. from Mauritius, says it will no longer ship wild animals in response to the incident.

The international airline that shipped 100 experimental lab monkeys to the U.S. last week before several of them escaped in a Pennsylvania truck crash will cease transporting the animals as soon as its contract expires, an a official said in an email to animal rights organization PETA.

Kenya Airways Chairman Michael Joseph confirmed that the airline shipped the long-tailed Macaques from the island nation of Mauritius to John F. Kennedy International Airport in New York. From there, the monkeys were placed on a truck that later crashed on Route 54 near I-80 in rural Pennsylvania last Friday.

"As a conservationist I am equally horrified even though I am assured that ... every international guideline has been followed," Joseph told PETA in an email provided to PhillyVoice.

Kenya Airways, the largest private carrier in the East African nation, plans to end the transport of all wild animals and will stop shipping macaques when its contract is up at the end of February.

Four monkeys escaped from their crates last Friday after the truck taking them to an undisclosed lab crashed with a dump truck in Danville, Montour County. One of the monkeys was corralled at the scene. The three others became the subjects of a lengthy search by Pennsylvania State Police and the Pennsylvania Game Commission, which located and euthanized the animals last Saturday.

A woman who was driving directly behind the truck and assisted at the scene became ill after she had close contact with monkey feces and saliva. The U.S. Centers for Disease Control & Prevention advised the woman to seek medical attention. She has since received a rabies vaccination and is on an antiviral medication.

The international trade of macaques, considered among the most scientifically valuable species for medical research, has long been a point of contention among animal rights groups and scientists — particularly universities that have urged airlines to remain open to moving lab animals.

A group of 90 universities and labs pressed the U.S. Department of Transportation last year to ensure that airlines don't arbitrarily exclude animals that are used for legally required drug-testing.

"Laboratory animal models are not only essential for facilitating our nation’s response to the ongoing COVID-19 pandemic, but also play an integral role in understanding various other diseases afflicting numerous Americans, including Alzheimer’s disease, cancer, and diabetes," the group wrote in a letter. "As other nations accelerate investments in research and development, we are concerned that leaving this issue unresolved will unnecessarily delay U.S. research productivity and weaken our nation’s ability to respond to future public health crises.

Over the last decade, animal rights organizations such as PETA successfully convinced most airlines to stop carrying primates for research, arguing that it's cruel to the animals, not correlated strongly enough with the success of experimental treatments and cures, and puts human beings at risk by exposing them to transmissible infectious diseases.

"Monkeys are complex beings whose most basic needs — home, family, and community —aren’t met in laboratories,” said PETA Vice President Dr. Alka Chandna. “Kenya Airways’ decision is important for all of us because the global transportation of monkeys also risks the possibility of emerging infectious diseases.”

During the COVID-19 pandemic, demand for lab monkeys has soared in the U.S., prompting larger investments in breeding the animals at domestic primate research facilities. That demand had already been high due to increased focus on HIV/AIDS research.

China, one of the world's biggest exporters of cynomolgus macaques, the species in the Pennsylvania crash, stopped shipping the monkeys during the pandemic. They are the preferred lab species of pharmaceutical companies, as compared to academic labs that favor rhesus macaques, according to Nature.

The U.S. National Institutes of Health has made significant investments over the last two years to increase capacity for primate research centers and the Biden administration also has called for greater funding for a domestic supply of captive lab monkeys to enable vaccine research and ensure pandemic readiness in the future.

In the wake of last week's crash in Pennsylvania, the U.S. Department of Agriculture has opened an investigation into the incident.